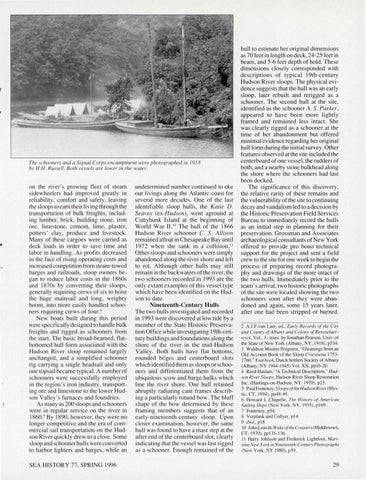 The schooners and a Signal C01ps encampment were photographed in 1918 by H.H . Russell . Both vessels are lower in the water.

on the ri ver's growing fl eet of steam sidewheelers had improved greatl y in reliabili ty, comfort and safety, leav ing the sloops to earn their li ving through the transportation of bulk freig hts, incl uding lumber, brick, building stone, iron ore, limestone, cement, lime, pl as ter, potters' clay, produce and li vestock. Many of these cargoes were carried as deck loads in order to save time and labor in handling. As profits decreased in the face of rising operating costs and increased competition from steam-towed barges and ra ilroads, sloop owners began to reduce labor costs in the 1860s and 1870s by converting their sloops, generall y req uiring crews of six to hoist the huge mainsail and long, weighty boom, into more easil y handl ed schooners req ui ring crews of fo ur. 8 New boats built during thi s period were specifica lly des igned to handle bulk freights and rigged as schooners from the start. The basic broad-beamed, fl atbottomed hull form associated with the Hudson Ri ver sloop remained largely unchanged, and a simplified schooner rig carry ing a single headsail and only one topsail became typical. A number of schooners were successfull y employed in the reg ion's iron industry, transporting ore and limestone to the lower Hudson Valley's furn aces and fo undries. As many as 200 sloops and schooners were in reg ul ar servi ce on the river in 1860.9 By 1890, however, they were no longer competi tive and the era of commerc ial sail transportation on the Hudson Ri ver quickly drew to a close. Some sloop and schooner hull s were converted to harbor lighte rs and barges, while an SEA HISTORY 77, SPRIN G 1996

undetermined number continued to eke o ut livings along the Atl anti c coast for several more decades. One of the last identifiable sloop hull s, the Katie D. Seavey (ex- Hudson), went aground at Cuttyhunk Island at the beginning of World War II. 10 The hull of the 1866 Hudson Ri ver schooner C. S. A llison remained afl oat in Chesapeake Bay until 1972 when she sank in a colli sion. 11 Other sloops and schooners were simply abandoned along the ri ver shore and left to rot. Although other hulls may still remain in the back waters of the river, the two schooners recorded in 1993 are the onl y extant examples of thi s vessel ty pe which have been identified on the Hudson to date. Nineteenth-Century Hulls The two hull s investi gated and recorded in 1993 were di scovered at low tide by a member of the State Hi storic Preservation Office whil e investigating 19th-century buildings and fo undations along the shore of the river in the mid-Hudson Valley. Both hull s have fl at bottoms, rounded bilges and centerboard slots which iden tified them as sloops or schooners and diffe renti ated them fro m the ubiq ui to us scow and barge hulks which line the river shore. One hull retained abruptly radi ating cant frames describing a particul arl y rotund bow. The bluff shape of the bow determined by these framing members suggests that of an earl y- nineteenth-century sloop. Upon c loser examination, however, the same hull was fo und to have a mast step at the after end of the centerboard slot, clearly indicating that the vessel was last rigged as a schooner. Eno ugh remained of the

hull to estimate her original dimensions as 70 feet in length on deck, 24-25 feet in beam, and 5-6 fee t depth of hold . These dimensions close ly corresponded with description s of typi ca l 19th-century Hudson River sloops. The phys ical evi dence suggests that the hull was an earl y sloop, later rebuilt and rerigged as a schooner. The second hull at the site, identified as the schooner A. S. Parker, appeared to have been more lightl y framed and remained less intact. She was c learl y rigged as a schooner at the time of her abandonment but offered minimal ev idence regarding her ori ginal hull fo rm during the initial survey. Other features observed at the site included the centerboard of one vessel, the rudders of both , and a nearby stone bulkhead along the shore where the schooners had last been docked. The significance of this discovery, the relative rarity of these remains and the vulnerability of the site to continuing decay and vandali sm led to a decision by the Hi storic Preservation Field Services Bureau to immedi ately record the hulls as an initi al step in planning for their preservation . Grossman and Associates archaeo log ical consultants of New York offered to provide pro bono technical support fo r the project and sent a fi eld crew to the site fo r one week to begin the process of preparing record photography and drawings of the more intact of the two hull s. Immediately prior to the team 's arriv al, two historic photographs of the site were located showing the two schooners soon after they were abandoned and again, some 15 years later, after one had been stripped or burned. 2 A.J. F.van Laer, ed., Early Records of the City and County of Albany and Colony of Rensselaerwyck, Vol. . 3., trans . by Jonathan Pearson, Univ . of the State of New York (A lbany, NY, 19 18), p534. 3 Wa ld ron Mosher Polgreen, "G leanings fro m an O ld Account Book of the Sloop Criestiena 17531760." Yearbook, Dutch Settlers Soc iety of Albany (A lbany, NY 1944- 1945) Vol. XX, ppl 6-20. 4 Reed Haslam , "A Technical Description," Hudson River Sloops , Hudson River Sloop Restoration Inc. (Hastings-on-Hudson, NY, 1970), p23. 5 Paul Fo ntenoy,Sloopsofthe Hudson River(M ystic, CT, 1994), pp48-49. 6 Howard I. Chapelle, The History of American Sailing Ships (New York , NY, 1935), p l 69. 7 Fontenoy , p54. 8 Verp lank and Collyer, p l4. 9 ibid., p l8. I0 John Leav itt, Wake ofthe Coasters (Midd letown, CT, 1970) , pp 135- 136. 11 Harry Johnson and Frederick Lightfoot, Maritime New York in Nineteenth-Century Plwrographs (New York, NY 1980), p39.