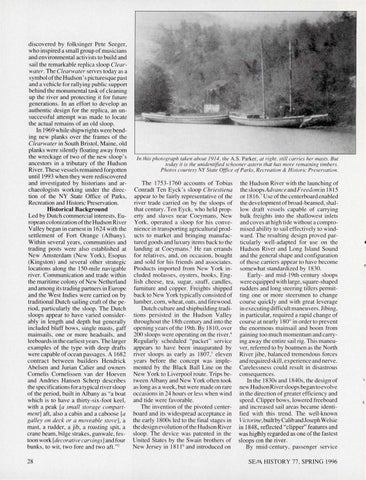 discovered by folksinger Pete Seeger, who inspired a small group of music ians and environmental activi sts to build and sail the remarkable replica sloop Clearwater. The Clearwater serves today as a symbol of the Hudson &#39;s picturesque past and a vehic le for rall ying public support behind the monumental tas k of cleaning up the ri ver and protecting it fo r future generati ons. In an effort to develop an authentic design for the replica, an unsuccessful attempt was made to locate the actual remains of an old sloop. In 1969 while shipwrights were bending new planks over the fram es of the Clemw ater in South Bristol, Maine, old planks were silentl y floating away from the wreckage of two of the ne w sloop &#39; s ancestors in a tributary of the Hudson River. These vessels remained forgotten until 1993 when they were redi scovered and investi gated by historians and archaeo logists working under the direction of the NY State Office of Parks, Recreation and Historic Preservation. Historical Background Led by Dutch commercial interests, European coloni zation of the Hudson Ri ver Valley began in earnest in 1624 with the settlement of Fort Orange (A lbany) . Within several years, communities and trading posts were also establi shed at New Amsterdam (New York), Esopus (Kingston) and several other strategic locations along the 150-mile nav igable ri ver. Communication and trade within the maritime colony of New Netherl and and among its trading partners in Europe and the West Indies were carried on by traditional Dutch sailing craft of the period , particularly the sloop. The Dutch sloops appear to have varied considerabl y in length and depth but generall y included bluff bows, single masts, gaff mainsail s, one or more headsail s, and leeboards in the earliest years . The larger examples of the type with deep drafts were capable of ocean passages. A 1682 cont rac t between builders He ndri ck Abe lsen and Jurian Calier and owners Corne li s Cornelissen van der Hoeven and Andries Hansen Scherp describes the specifications for a typical ri ver sloop of the period, built in Albany as &quot;a boat which is to have a thirty-six-foot keel, with a peak [a small storage compartment] aft, also a cabin and a caboose [a galley on deck or a moveable stove], a mas t, a rudder, a jib, a roasting spit, a crane beam, bilge strakes , gunwale, festoon work [decorative carvings] and fo ur bunks, to wit, two fore and two aft. &quot; 2 28

In this photograph taken about 1914, the A.S. Parker, at righr, still carries her masts. But today it is the unidentified schooner astern that has more remaining timbers . Photos courtesy NY Stare Office of Parks , Recreation &amp; Historic Preservation.

The 1753- 1760 acco unts of To bias Conradt Ten Eyck&#39;s sloop Chriestiena appear to be fa irl y representati ve of the ri ver trade carried on by the sloops of that century. Ten Eyck, who held property and slaves near Coeymans, New Yo rk , operated a sloop fo r hi s convenience in tra nsporting agricultu ral products to market and bring ing manufactured goods and luxury items back to the landing at Coeymans. 3 He ran errands fo r relatives, and , on occasion, bought and sold for his friend s and associates. Products imported from New York incl uded molasses, oysters, books, Engli sh cheese, tea, sugar, snuff, candles, furniture and copper. Fre ights shipped back to New York typi ca ll y consisted of lumber, corn , wheat, oats, and firewood. Dutch culture and shipbuilding traditions persisted in the Hudson Valley throughout the 18th century and into the opening years of the 19th . By 18 10, over 200 sloops were operating on the ri ver. 4 Regularly schedul ed &quot; packet&quot; service appears to have been inaugurated by ri ver sloops as earl y as 1807,5 eleven years before the concept was implemented by the Black Ball Line on the New York to Liverpool route. T rips between A lbany and New York often took as long as a week, but were made on rare occasions in 24 ho urs or less when wind and tide were favora ble. The invention of the pi voted centerboard and its widespread acceptance in the early 1800s led to the fi nal stages in the design evo lution of the Hudson Ri ver sloop. The dev ice was patented in the United States by the Swain brothers of New Jersey in 18 11 6 and introduced on

the Hudson Ri ver wi th the launching of the sloops Advance and Freedom in 18 15 or 18 16 .7 Use of the centerboard enabled the deve lopment of broad-beamed, shallow draft vessels capable of carrying bulk fre ights into the shallowest inlets and coves at hi gh tide without a comp romi sed ability to sail effectively to windward . T he resulting des ign pro ved particularly well -adapted fo r use on the Hudson River and Long Island Sound and the genera l shape and confi gurati on of these carriers appear to have become somewhat standard ized by 1830. Early- and mid- 19th -century sloops were equipped wi th large, square-shaped rudders and long steering tillers permitting one or more steersmen to change course quickl y and with great leverage in executing difficult maneuvers. Jibing, in partic ul ar, required a rapid change of course at nearl y 180Â° in order to prevent the enorrnous mainsail and boom fro m gaining too much momentum and carrying away the entire sail ri g. Thi s maneuver, referred to by boatmen as the North Ri ver jibe, balanced tremendous forces and required skill , ex peri ence and nerve. Carelessness coul d result in disastro us consequences. In the 1830s and 1840s, the des ign of new Hudson Ri ver sloops began to evolve in the direction of greater effic iency and speed. C lipper bows, lowered freeboard and increased sail areas became identifi ed with this trend. The well -known Victorine, built by Calib andJoseph Welsie in 1848,, reflected &quot;clipper&quot; features and was higlhly regarded as one of the fastest sloops mn the river. By rmid-century , passenger service SEA\ HISTORY 77 , SPRING 1996