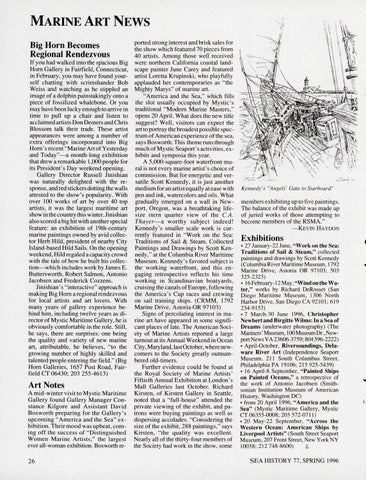 MARINE ART NEWS ported strong interest and brisk sales for the show which featured 70 pieces from 40 artists . Among those well received If you had walked into the spacious Big were northern California coastal landHom Gallery in Fairfield, Connecticut, scape painter June Carey and featured in February, you may have found your- artist Loretta Krupinski, who playfully self chatting with scrimshander Bob applauded her contemporaries as " the Weiss and watching as he stippled an Mighty Marys" of marine art. image of a dolphin painstakingly onto a "America and the Sea," which fills piece of fossilized whalebone. Or you the slot usually occupied by Mystic 's may have been lucky enough to arrive in traditional " Modem Marine Masters," time to pull up a chair and listen to opens 20 April. What does the new title acclaimed artists Don Demers and Chris suggest? Well, visitors can expect the Blossom talk their trade. These artist art to portray the broadest possible specappearances were among a number of trum of American experience of the sea, extra offerings incorporated into Big says Bosworth. This theme runs through Hom ' s recent "Marine Art of Yesterday much of Mystic Seaport's activities, exand Today"-a month-long exhibition hibits and symposia this year. that drew a remarkable 1,000 people for A 5,000-square-foot waterfront muits President' s Day weekend opening. ral is not every marine artist 's choice of Gallery Director Russell Jinishian commission. But for energetic and verwas naturally delighted with the re- satile Scott Kennedy, it is just another sponse, and red stickers dotting the walls medium for an artist equally at ease with attested to the show 's popularity. With pen and ink, watercolors and oils. What over 100 works of art by over 40 top gradually emerged on a wall in Newartists, it was the largest maritime art port, Oregon , was a breathtaking Jifeshow in the country this winter. Jinishian size stern quarter view of the C .A. also scored a big hit with another special Thaye r-a worthy subject indeed! feature: an exhibition of 19th-century Kennedy 's smaller scale work is curmarine paintings owned by avid collec- rently featured in "Work on the Sea: tor Herb Hild, president of nearby City Traditions of Sail & Steam, Collected Island-based Hild Sails. On the opening Paintings and Drawings by Scott Kenweekend , Hild regaled a capacity crowd nedy," at the Columbia River Maritime with the tale of how he built his collec- Museum. Kennedy 's favored subject is tion- which includes work by James E. the working waterfront, and this enButtersworth, Robert Salmon, Antonio gaging retrospective reflects his time Jacobsen and Frederick Cozzens. working in Scandinavian boatyards, Jinishian 's "interactive" approach is cruising the canals of Europe, following making Big Hom a regional rendezvous the America's Cup races and crewing for local artists and art lovers. With on sail training ships. (CRMM, 1792 many years of gallery experience be- Marine Drive, Astoria OR 97103) hind him, including twelve years as diSigns of percolating interest in marector of Mystic Maritime Gallery, he is rine art have appeared in some signifiobviously comfortable in the role. Still , cant places of late. The American Socihe says, there are surprises: one being ety of Marine Artists reported a large the quality and variety of new marine turnout at its Annual Weekend in Ocean art, attributable, he believes, "to the City, Maryland, last October, where newgrowing number of highly skilled and comers to the Society greatly outnumtalented people entering the field." (Big bered old-timers. Horn Galleries, 1657 Post Road, FairFurther evidence could be found at field 06430; 203 255-4613) the Royal Society of Marine Artists' Fiftieth Annual Exhibition at London 's Art Notes Mall Galleries last October. Richard A mid-winter visit to Mystic Maritime Kirsten, of Kirsten Gallery in Seattle, Gallery found Gallery Manager Con- noted that a "full-house" attended the stance Kilgore and Assistant David private viewing of the exhibit, and paBosworth preparing for the Gallery 's trons were buying paintings as well as upcoming " America and the Sea" ex- dispersing accolades . "Considering the hibition . Their mood was upbeat, com- size of the exhibit, 288 paintings," says ing off the success of " Distinguished Kirsten, " the quality was excellent. Women Marine Artists," the largest Nearly all of the thirty-four members of ever all-woman exhibition. Bosworth re- the Society had work in the show, some

members exhibiting up to five paintings. The balance of the exhibit was made up of juried works of those attempting to become members of the RSMA." -KEVIN HAYDON