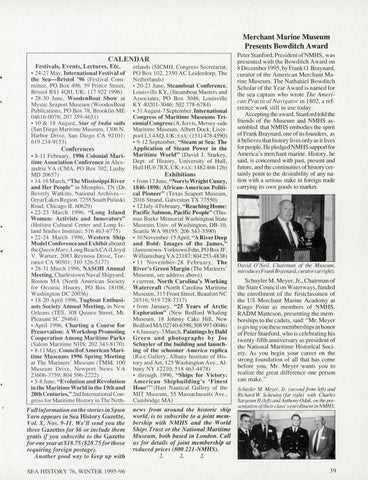 Full information on the stories in Spun Yarn appears in Sea History Gazette, Vol. X, Nos. 9-11. We&#39;ll send you the three Gazettes for $6 or include them gratis if you subscribe to the Gazette for one yearat$18.75 ($28.75/orthose requiring foreign postage). Another good way to keep up with SEA HISTORY 76, WINTER 1995-96

news from around the historic ship world, is to subscribe to a joint membership with NMHS and the World Ships Trust or the National Maritime Museum, both based in London. Call us for details of joint membership at reduced prices (800 221-NMHS).

Peter Stanford, PresidentofNMHS , was presented with the Bowditch Award on 8December1995, by Frank 0. Braynard, curator of the American Merchant Marine Museum. The Nathaniel Bowditch Scholar of the Year A ward is named for the sea captain who wrote The American Practical Navigator in 1802, a reference work still in use today . Accepting the award, Stanford told the friends of the Museum and NMHS assembled that NMHS embodies the spirit of Frank Braynard, one of its founders, as it believes that history lives only as it lives for people. He pledged NMHS support for America&#39;s merchant marine. History, he said, is concerned with past, present and future, and the continuities of history certainly point to the desirability of any nation with a serious stake in foreign trade carrying its own goods to market.

Schuyler M. Meyer, Jr. , Chairman of the State Council on Waterways, funded the enrollment of the firstclassmen of the US Merchant Marine Academy at Kings Point as members of NMHS. RADM Matteson, presenting the memberships to&#39; the cadets, said: &quot;Mr. Meyer is giving you these memberships in honor of Peter Stanford, who is celebrating hi s twenty-fifth anniversary as president of the National Maritime Historical Society. As you begin your career on the strong foundation of all that has come before you, Mr. Meyer wants you to realize the great difference one person can make.&quot; Schuyler M. Meyer, Jr. (second from left) and Richard W. Scheuing (jar right) with Charles Sargeant II (lefl) and Anthony Odak, on the presentation oftheirclass&#39; senrollment inNMHS.