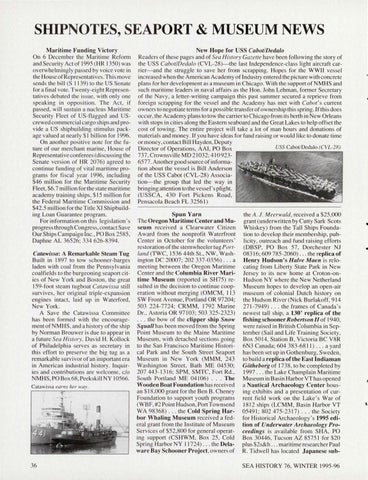 SHIPNOTES, SEAPORT &amp; MUSEUM NEWS Maritime Funding Victory On 6 December the Maritime Reform and Security Act of 1995 (HR 1350) was overwhelmingly passed by voice vote in the HouseofRepresentatives. This move sends the bill (S 1139) to the US Senate for a final vote. Twenty-eight Representatives debated the issue, with on ly one speaking in opposition. The Act, if passed, will sustain a nucleus Maritime Security Fleet of US-flagged and UScrewed commercial cargo ships and provide a US shipbuilding stim ulus package valued at nearly $ I billion for 1996. On another positive note for the future of our merchant marine, House of Representative conferees (discussing the Senate version of HR 2076) agreed to continue fundin g of vital maritime programs for fiscal year 1996, including $46 million for the Maritime Security Fleet, $6.7 million for the state maritime academy training ships, $ 15 million for the Federal Maritime Commission and $42.5 million for the Title XI Shipbuilding Loan Guarantee program. For information on this legislation &#39;s progress through Congress, contact Save Our Ships Campaign Inc. , PO Box 2585, Daphne AL 36526; 334 626-8394.

Catawissa: A Remarkable Steam Tug Built in 1897 to tow schooner-barges laden with coal from the Pennsylvania coalfields to the burgeoning seaport cities of New York and Boston, the great 159-foot steam tugboat Catawissa sti ll survives, her original triple-expansion engines intact, laid up in Waterford, New York . A Save the Catawissa Committee has been formed with the encouragement ofNMHS, and a hi story of the ship by Norman Brouwer is due to appear in a future Sea Histmy. David H. Kollock of Philadelphia serves as secretary in thi s effort to preserve the big tug as a remarkable survivor of an important era in American industrial hi story. Inquiries and contributions are welcome, c/o NMHS,POBox68,PeekskillNY 10566. Catawissa earns her way.

New Hope for USS Cabot/Dedalo Readers of these pages and of Sea History Gazette have been following the story of the USS Cabot/Dedalo (CVL-28)-the last Independence-class light aircraft carrier-and the struggle to save her from scrapping. Hopes for the WWII vessel increased when the American Academy of Industry entered the picture with concrete plans for her development as a museum in Chicago. With the support of NMHS and such maritime leaders in naval affairs as the Hon. John Lehman , former Secretary of the Navy, a letter-writing campaign this past summer secured a reprieve from foreign scrapping for the vessel and the Academy has met with Cabot&#39;s current owners to negotiate terms for a possible transfer of ownership this spring. If thi s does occur, the Academy plans to tow the carrier to Chicago from its berth in New Orleans with stops in cities along the Eastern seaboard and the Great Lakes to help offset the cost of towing. The entire project will take a lot of man hours and donations of material s and money . If you have ideas for fund raising or would like to donate time or money, contact Bill Ha yd en, Deputy USS Cabot/Dedalo (CVL-28) Director of Operations, AAI, PO Box 737, Crownsville MD 21032; 410 9236577. Another good source of information about the vessel is Bill Anderson of the USS Cabot (CVL-28) Association-the group that led the way in bringing attention to the vessel&#39;s plight. (USSCA , 430 Fort Pickens Road , Pensacola Beach FL 32561) Spun Yarn The Oregon Maritime Center and Museum received a Clearwater Citizen Award from the nonprofit Waterfront Center in October for the volunteers&#39; restoration of the sternwheeler tug Portland (TWC, 1536 44th St., NW, Washington DC 20007; 202 337-0356) ... a meeting between the Oregon Maritime Center and the Columbia River Maritime Museum (reported in SH75) resulted in the deci sion to continue cooperation without merging (OMCM, 113 SW Front Avenue, Portland OR 97204; 503 224-7724; CRMM, 1792 Marine Dr. , Astoria OR 97103; 503 325-2323) . . . the bow of the clipper ship Snow Squall has been moved from the Spring Point Museum to the Maine Maritime Museum, with detached section s going to the San Francisco Maritime Hi storical Park and the South Street Seaport Museum in New York (MMM, 243 Washington Street, Bath ME 04530; 207 443-1316; SPM, SMTC, Fort Rd. , South Portland ME 04106) . . . The Wooden Boat Foundation has received an $18,000 grant for the Ben B. Cheney Foundation to support youth programs (WBF, #2 Point Hudson, Port Townsend WA 98368) . .. the Cold Spring Harbor Whaling Museum received a federal grant from the In stitute of Museum Services of $52,800 for general operating support (CSHWM, Box 25, Cold Spring Harbor NY 11724) ... the Delaware Bay Schooner Project, owners of