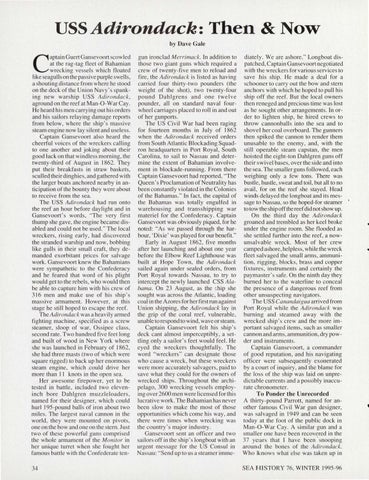 USS Adirondack: Then &amp; No-wby Dave Gale aptain Guert Gansevoort scowled at the rag-tag fleet of Bahamian wrecking vessels which floated like seagulls on the passive purple swells, a shouting distance from where he stood on the deck of the Union Navy &#39; s spanking new warship USS Adirondack, aground on the reef at Man-0-WarCay. He heard his men carrying out his orders and his sailors relaying damage reports from below, where the ship &#39; s massive steam engine now lay silent and useless. Captain Gansevoort also heard the cheerful voices of the wreckers calling to one another and joking about their good luck on that windless morning, the twenty-third of August in 1862. They put their breakfasts in straw baskets, sculled. their dinghies, and gathered with the larger boats anchored nearby in anticipation of the bounty they were about to receive from the sea. The USS Adirondack had run onto the reef an hour before daylight and in Gansevoort &#39; s words, &quot;The very first thump she gave, the engine became disabled and could not be used. &quot; The local wreckers, rising early, had discovered the stranded warship and now, bobbing like gulls in their small craft, they demanded exorbitant prices for salvage work. Gansevoort knew the Bahamians were sympathetic to the Confederacy and he feared that word of his plight would get to the rebels, who would then be able to capture him with his crew of 316 men and make use of his ship&#39;s massive armament. However, at this stage he still hoped to escape the reef. The Adirondack was a heavily armed fighting machine, specified as a screw steamer, sloop of war, Ossipee class, second rate. Two hundred five feet long and built of wood in New York where she was launched in February of 1862, she had three masts (two of which were square rigged) to back up her enormous steam engine, which .could drive her more than 11 knots in the open sea. Her awesome firepower, yet to be tested in battle, included two eleveninch bore Dahlgren muzzleloaders, named for their designer, which could hurl 195-pound balls of iron about two miles. The largest naval cannon in the world, they were mounted on pivots , one on the bow and one on the stern.Just two of these powerful guns comprised the whole armament of the Monitor in her unique turret when she fought her famous battle with the Confederate ten-

gun ironclad Merrimack. In addition to those two giant guns which required a crew of twenty-five men to reload and fire, the Adirondack is listed as having carried four thirty-two pounders (the weight of the shot), two twenty-four pound Dahlgrens and one twelve pounder, all on standard naval fourwheel carriages placed to roll in and out of her gunports. The US Civil War had been raging for fourteen months in July of 1862 when the Adirondack received orders from South Atlantic Blockading Squadron headquarters in Port Royal, South Carolina, to sai l to Nassau and determine the extent of Bahamian involvement in blockade-running. From there Captain Gansevoort had reported, &quot;The Queen &#39; s Proclamation of Neutrality has been constantly violated in the Colonies of the Bahamas.&quot; In fact, the o-apital of the Bahamas was totally engu lfed in warehousing and transshipping war materiel for the Confederacy. Captain Gansevoort was obviously piqued, for he noted: &quot;As we passed through the harbour, &#39;Dixie&#39; was played for our benefit.&quot; Early in August 1862, five months after her launching and about one year before the Elbow Reef Lighthouse was built at Hope Town , the Adirondack sailed again under sealed orders, from Port Royal towards Nassau, to try to intercept the newly launched CSS Alabama. On 23 August, as the ~ hip she sought was across the Atlantic, loading coal in the Azores for her first run against Union shipping, the Adirondack lay in the grip of the coral reef, vulnerable, unable to respond to wind, wave or steam. Captain Gansevoort felt his ship&#39;s deck cant almost imperceptibly, a settling only a sailor&#39; s feet would feel. He eyed the wreckers thoughtfully. The word &quot;wreckers&quot; can designate those who cause a wreck, but these wreckers were more accurately salvagers, paid to save what they could for the owners of wrecked ships. Throughout the archipelago, 300 wrecking vessels employing over2600men were licensed forth is lucrative work. The Bahamian has never been slow to make the most of those opportunities which come his way, and there were times when wrecking was the country&#39;s major industry. Gansevoort sent an officer and two sailors off in the ship &#39; s longboat with an urgent message for the US Consu l in Nassau: &quot;Send up to us a steamer imme-

diately. We are ashore.&quot; Longboat dispatched, Captain Gansevoort negotiated with the wreckers for various serv ices to save his ship. He made a deal for a schooner to carry out the bow and stern anchors with which he hoped to pull hi s ship off the reef. But the local owners then reneged and precious time was lost as he sought other arrangements. In order to lighten ship, he hired crews to throw cannonballs into the sea and to shovel her coal overboard. The gunners then sp iked the cannon to render them unusable to the enemy, and, with the still operable steam capstan, the men hoisted the eight-ton Dahlgren guns off their swivel bases, over the side and into the sea. The smaller guns followed, each weighing only a few tons. There was bustle, hustle, sweat and toil, but all to no avai l, for on the reef she stayed. Head winds delayed the longboat and its message to Nassau, so the hoped-for steamer &#39; to tow the ship off the reef did not show up. On the third day the Adirondack groaned and trembled as her keel broke under the engine room. She flooded as she settled further into the reef, a nowunsalvable wreck. Most of her crew camped ashore, helpless, while the wreck fleet salvaged the small arms, ammunition, rigging, blocks, brass and copper fixtures, instruments and certainly the paymaster &#39; s safe. On the ninth day they burned her to the waterline to conceal the presence of a dangerous reef from other unsuspecting navigators. The USS Canandaigua arrived from Port Royal while the Adirondack was burning and steamed away with the wrecked ship&#39;s crew and the more important salvaged items, such as smaller cannon and arms, ammunition , dry powder and instruments. Captain Gansevoort, a commander of good reputation , and hi s navigating officer were subseq uentl y exonerated by a court of inquiry, and the blame for the loss of the ship was laid on unpredictable currents and a possibly inaccurate chronometer.

To Ponder the Unrecorded A thirty-pound Parrott, named for another famous Civil War gun designer, was salvaged in 1949 and can be seen today at the foot of the public dock in Man-0-War Cay . A similar gun and a smaller one have been recovered in the 37 years that I have been Âˇsnooping arounid the bones of the Adirondack. Who !knows what e lse was taken up in SEA HISTORY 76, WINTER 1995-96