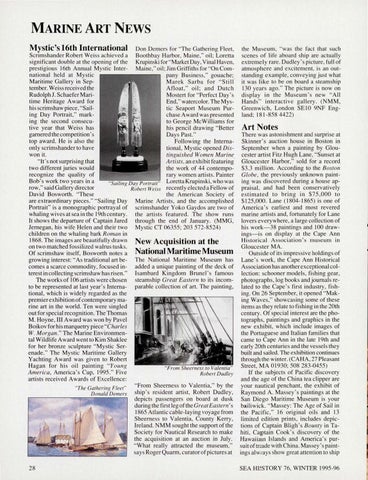 There was astonishment and surpri se at Skinner &#39; s auction house in Boston in September when a painting by G loucester arti st Fitz Hugh Lane, &quot;Sunset at Glouceste r Harbor,&quot; sold for a record $3 .3 million . According to the Boston Globe, the prev iously unknown painting was di scovered during a house appraisal, and had been conservati vely es tim a te d to brin g in $75 ,000 to $ 125,000. Lane (1 804- 1865) is one of Ameri ca &#39; s earliest and most revered marine arti sts and , fo rtunately for Lane lovers everywhere, a large collection of hi s work-38 paintings and JOO drawings-is o n displ ay at the Cape Ann Hi storica l Assoc iation &#39; s mu se um in Glo ucester MA. Outside of its impress ive holdings of Lane &#39; s work, the Cape Ann Historical Association has another exceptional collecti on: schooner models, fi shing gear, photographs, log books and journals related to the Cape &#39; s fi rst industry, fi shing. On 26 September, it opened &quot;Making Waves ,&quot; showcas ing some of these items as they relate to fi shing in the 20th century. Of special interest are the photograph s, paintings and graphics in the new exhibit, whi ch include images of the Portug uese and Italian famili es that came to Cape Ann in the late 19th and early 20th centuries and the vessels they built and sailed. The exhibition continues through the winter. (CAHA , 27 Pleasant Street, MA 01 930; 508 28 3-0455) If the subjects of Pacific discovery and the age of the China tea clipper are yo ur nautical penchant, the exhibit of Raymond A. Massey&#39;s paintings at the San Diego Maritime Museum is your baili wick. &quot;Massey: The Age of Sail in the Pac ific ,&quot; 16 original oils and 13 limited edition prints, includes depictions of Captain Bligh &#39;s Bounty in Tahiti , Cajptain Cook &#39;s discovery of the Hawaii am Islands and America &#39; s pursuit of trrnde with China. Massey&#39;s paintings alwrnys show great attention to ship