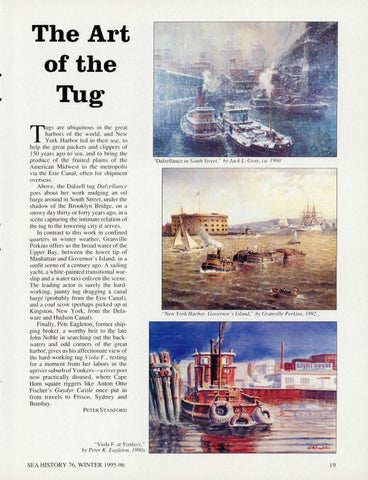 The Art of the

Tug ugs are ubiquito us in the great harbors of the wo rld , and New York Harbor led in the ir use, to help the great packets and clippers of 150 years ago to sea, and to bring the produce of the fruited plains of the Ameri can Midwest to the metropo li s via the Eri e Canal, often for shipment overseas. Above , the Dalze ll tug Dalze llan ce goes about her work nudg ing an o il barge aro und in South Street, under the shadow of the Brookl yn Bridge, on a snowy da y thirty or forty years ago, in a scene capturing the intim ate relation of the tug to the towering c ity it serves . Jn contrast to thi s work in confined quarters in winter weather, G ranville Perkin s offers us the broad water of the Upper Bay, between the lower tip of Manhattan and Governor&#39;s Island , in a sunlit scene of a century ago. A sailing yac ht, a white-painted transiti onal warship and a water ta xi enliven the scene. The leading actor is s ure ly the hardwork ing, jaunty tug dragging a canal barge (probably from the Erie Canal) , and a coa l scow (perhaps pi cked up at Kingston , New York , from the De lawa re and Hudson Canal). Finall y, Pete Eagleton , former shipping broker, a worthy heir to the late John Noble in searching out the backwaters and odd corners of the great harbor, gives us hi s affectionate view of the hard -working tug Vio la F. , resting fo r a moment from her labors in the upri ver suburb of Yonkers-a river port now practicall y di sused , where Cape Horn square riggers like Anton Otto Fischer&#39; s Guydyr Castle once put in from trave ls to Frisco, Sydney and Bombay.