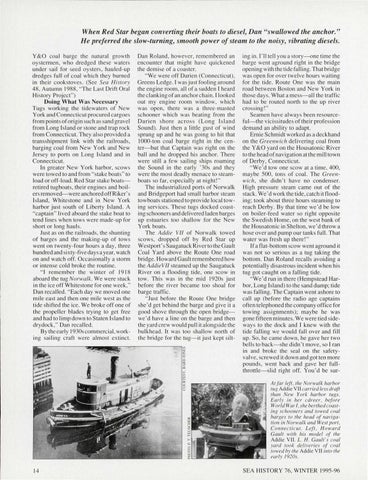 Doing What Was Necessary Tugs wo rking the tidewaters of New York and Connecti cut proc ured cargoes from po ints of ori g in such as sand grave l from Long Island or stone and tra p roc k from Connecti c ut. They a lso provided a tran sshipment link with the railroads, barging coal from New York and New Jersey to ports on Long Island and in Connecti cut. In greater Ne w York harbor, scows were towed to and from "stake boats" to load or off-load. Red Star stake boats retired tugboats, the ir eng ines and bo il ers removed-were anchored off Riker' s Island , Whitestone and in New York harbor just so uth of Liberty Island . A "capta in " li ved aboard the stake boat to tend lines when tows were made- up for short or long haul s. Just as o n the railroads, the shunting of barges and the making- up of tows went on twenty-fo ur hours a day , three hundred and sixty-fi ve days a year, watch on and watch off. Occas ionally a storm or intense cold broke the ro utine. " I reme mber the w inte r of 19 18 aboard the tug Norwalk. We were stuck in the ice off Whitestone fo r one week," Dan recalled. " Eac h day we moved one mile east and then one mile west as the tide shifted the ice. We broke off one of the prope ll er bl ades trying to get free and had to limp down to Staten Island to drydock," Dan reca lled. By the earl y 1930s commercial, working sa iling craft were almost ex tinct.

Dan Rol and , however, remembered an encounter that mi ght have quickened the demise of a coaster. " We were off Dari en (Connectic ut), Greens Ledge. I was just foo ling around the engine room , all of a sudden I heard the clanking ofan anchor chain . I looked out my eng ine room window , whi ch was open, there was a three-mas ted schooner which was beating from the Da ri e n sho re across (Lo ng Is la nd Sound). Just then a little g ust of wi nd sprung up and he was going to hi t that 1000-ton coa l barge ri ght in the center- but th at Captain was ri ght on the ball and he dropped hi s anchor. There were still a few sailing ships roaming the Sound in the earl y ' 30s and they were the most deadl y menace to steamboats so fa r, espec iall y at ni ght!" The industria li zed ports of No rwalk and Bridgeport had small harbor steam towboats stati oned to provide local towing servi ces. These tugs docked coasting schooners and deli vered laden barges up estuari es too shall ow fo r the New York boats. The Addie VII of Norwalk to wed scow s, dropped off by Red Star up Westport ' s Saugatuck River to the Gault Coal Yard above the Route One road bridge. Howard Gault re membered ho w the Addie VII steamed up the Saugatuck Ri ver on a fl ood ing tide, one scow in tow . Thi s was in the mid 1920s just before the river became too shoa l for barge traffi c. "Ju st before the Ro ute One bridge she' d get behind the barge and g ive it a good shove through the open bridgewe ' d have a line on the barge and then the ya rd crew would pull it alongs ide the bulkhead. It was too sha ll ow north of the bridge fo r the tug- it just kept silt-

in g in . I' ll te ll yo u a story-o ne time the barge we nt ag round ri ght in the bridge opening with the tide fallin g. Th at bridge was open for over twe lve hours waiting fo r the tide. Route One was the main road between Boston and Ne w York in those da ys. What a mess-all the traffi c had to be routed north to the up ri ve r cross ing!" Seamen have always been resourceful- the viciss itudes of the ir profess ion demand an ability to adapt. Ernie Schmidt wo rked as a dec khand on the Greenwich delivering coal from the Y &O yard on the Housatonic Rive r to the head of navigation at the mi II town of Derby, Connecticut. " We' d tow one scow at a time, 400, may be 500, tons of coal. The Greenwich, she didn ' t have no condenser. High pressure steam came out of the stac k. We ' d work the tide , catch it fl ooding; took about three ho urs steaming to reach Derby. B y th at time we' d be low on boiler-feed water so ri ght opposite the Swedi sh Horne, on the west bank of the Hou satonic in She lton , we ' d throw a hose over and pump our tanks full. That water was fresh up there !" If a fl at-bottom scow went aground it was not so seri ous as a tug taking the bottom . Dan Ro land recall s avoiding a potenti all y di sastrous inc ident when hi s tug got caught on a fa lling tide . " We' d run in there (Hempstead Harbor, Long Island) to the sand dump; tide was fa lling. The Captain went as hore to ca ll up (before the radio age captains often te lephoned the company office for towing ass ignments); may be he was gone fi fteen minutes. We were tied sideways to the dock and I knew with the tide fa llin g we wo uld fa ll over and fill up. So, he came down , he gave her two be ll s to bac k-she didn ' t move, so I ran in and broke the seal on the safetyvalve, screwed it down and got ten more pounds, went bac k and gave her full throttl e-s lid ri ght off. You ' d be sur-