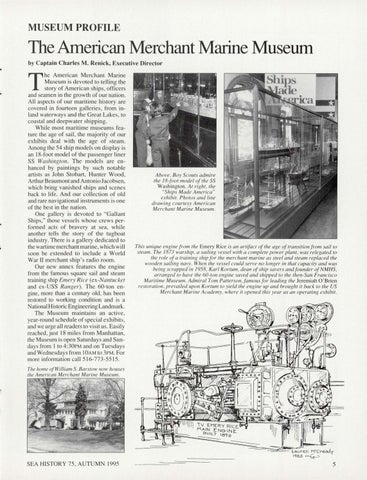 The American Merchant Marine Museum by Captain Charles M. Renick, Executive Director he American Merchant Marine Museum is devoted to telling the story of American ships, officers and seamen in the growth of our nation. All aspects of our maritime history are covered in fourteen galleries , from inland waterways and the Great Lakes, to coastal and deepwater shipping. While most maritime museums feature the age of sai l, the majority of our exhibits deal with the age of steam. Among the 54 ship models on display is an 18-foot model of the passenger liner SS Washington. The models are enhanced by paintings by such notable artists as John Stobart, Hunter Wood , Arthur Beaumont and Antonio Jacobsen, which bring vanished ships and scenes back to li fe. And our collection of old and rare navigational instruments is one of the best in the nation. One gallery is devoted to "Gallant Ships," those vessels whose crews performed acts of bravery at sea, while another tells the story of the tugboat industry. There is a gallery dedicated to the wartime merchant marine, which will soon be extended to include a World War II merchant ship's radio room. Our new annex features the engine from the famous square sai l and steam training ship Emery Rice (ex-Nantucket and ex-USS Ranger). The 60-ton engine, more than a century old, has been restored to working condition and is a National Historic Engineering Landmark. The Museum maintains an active, year-round schedule of special exhibits, and we urge all readers to visit us . Easily reached , just 18 miles from Manhattan, the Museum is open Saturdays and Sundays from I to 4:30PM and on Tuesdays and Wednesdays from I OAM to 3PM. For more information call 516-773-55 I 5.

This unique engine from the Emery Rice is an artifacr of the age of transition from sail to steam. The 1873 warship , a sailing vessel with a complete power plant , was relegated to the role of a /raining ship for the merchant marine as steel and steam replaced the wooden sailing navy. When the vessel could serve no longer in rhat capacity and was being scrapped in 1958, Karl Kortum , dean of ship savers and founder of NMHS , arranged to have the 60-ton engine saved and shipped to rh e then-San Francisco Maritime Museum. Admiral Tom Patterson.famous for leading the Jeremiah O'Brien restoration , prevailed upon Kortum to yield rhe engine up and brought it back to the US Merchant Marine Academy, where it opened this year as an operaring exhibit.