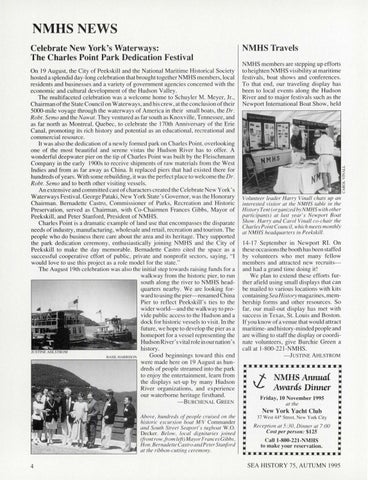 NMHSNEWS Celebrate New York&#39;s Waterways: The Charles Point Park Dedication Festival On 19 August, the City of Peekskill and the National Maritime Historical Society hosted a splendid day-long celebration that brought together NMHS members, local residents and businesses and a variety of government agencies concerned with the economic and cultural development of the Hudson Valley. The multifaceted celebration was a welcome home to Schuyler M. Meyer, Jr. , Chairman of the State Council on Waterways, and his crew, at the conclusion of their 5000-mile voyage through the waterways of America in their small boats, the Dr. Robt. Semo and the Nawat. They ventured as far south as Knoxville, Tennessee, and as far north as Montreal , Quebec, to celebrate the 170th Anniversary of the Erie Canal , promoting its rich history and potential as an educational, recreational and commercial resource. It was also the dedication of a newly formed park on Charles Point, overlooking one of the most beautiful and serene vistas the Hudson River has to offer. A wonderful deepwater pier on the tip of Charles Point was built by the Fleischmann Company in the earl y 1900s to receive shipments of raw materials from the West Indies and from as far away as China. It replaced piers that had existed there for hundreds of years. With some rebuilding, it was the perfect place to welcome the Dr. Robt. Semo and to berth other visiting vessels. An extensive and committed cast of characters created the Celebrate New York&#39;s Waterways Festival. George Pataki, New York State&#39;s Governor, was the Honorary Chairman. Bernadette Castro, Commissioner of Parks, Recreation and Historic Preservation, served as Chairman, with Co-Chairmen Frances Gibbs, Mayor of Peeksk ill , and Peter Stanford, President of NMHS. Charles Point is a dramatic example of land use that encompasses the disparate needs of industry , manufacturing, wholesale and retail , recreation and tourism. The people who do business there care about the area and its heritage . They supported the park dedication ceremony , enth usiastically joining NMHS and the City of Peekskill to make the day memorable. Bernadette Castro cited the space as a successful cooperative effort of public, private and nonprofit sectors, saying, &quot;I would love to use this project as a role model for the state.&quot; The August 19th celebration was also the initial step towards rai si ng funds for a walkway from the historic pier, to run south along the river to NMHS headquarters nearby. We are looking forward to using the pier-renamed China Pier to reflect Peekskill&#39;s ties to the wider world-and the walkway to provide public access to the Hudson and a dock for historic vessels to visit. In the future , we hope to develop the pier as a homeport for a vessel representing the Hudson River&#39;s vital role in ournation &#39;s history. JUSTINE A HLSTROM Good beginnings toward this end BASIL HARRISON were made here on 19 August as hundreds of people streamed into the park to enjoy the entertainment, learn from the displays set-up by many Hudson River organizations, and experience our waterborne heritage firsthand. -BURCHENAL GREEN

NMHS Travels NMHS members are stepping up efforts to heighten NMHS visibility at maritime festiva ls, boat shows and conferences. To that end, our traveling display has been to local events along the Hudson River and to major festivals such as the Newport International Boat Show, held

Volunteer leader Harry Vinall chats up an interested visitor at the NMHS table in the History Tent (organized byNMHS with other participants) at last year&#39;s Newport Boat Show. Harry and Carol Vinall co-chair the Charles Point Council, which meets monthly at NMHS headquarters in Peekskill.

14-17 September in Newport RI. On these occasions the booth has been staffed by volunteers who met many fellow members and attracted new recruits and had a grand time doing it! We plan to extend these efforts further afield using small displays that can be mailed to various locations with kits containing Sea History magazines, membership forms and other resources. So far, our mail-out display has met with success in Texas , St. Louis and Boston. If you know of a venue that would attract maritime- and history-minded people and are willing to staff the display or coordinate volunteers, give Burchie Green a call at 1-800-221-NMHS. -JUSTINE AHLSTROM