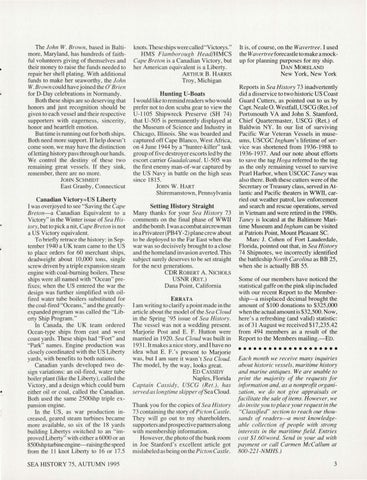 The John W. Brown, based in Baltimore, Maryland, has hundreds of faithful volunteers giving of themselves and their money to raise the funds needed to repair her shell plating. With additional funds to make her seaworthy, the John W. Brown could have joined the 0' Brien for D-Day celebrations in Normandy. Both these ships are so deserving that honors and just recognition should be given to each vessel and their respective supporters with eagerness, sincerity, honor and heartfelt emotion. But time is running out for both ships. Both need more support. If help doesn 't come soon, we may have the distinction ofletting history pass through our hands. We control the destiny of these two remaining great vessels. If they sink, remember, there are no more. JOHN SCHMIDT East Granby, Connecticut

knots. These ships were called "Victorys." HMS Flamborough Head/HMCS Cape Breton is a Canadian Victory, but her American equivalent is a Liberty. ARTHUR B. HARRIS Troy, Michigan Hunting U-Boats I would like to remind readers who would prefer not to don scuba gear to view the U-1105 Shipwreck Preserve (SH 74) that U-505 is permanently displayed at the Museum of Science and Industry in Chicago, Illinois. She was boarded and captured off Cape Blanco, West Africa, on 4 June 1944 by a "hunter-killer" task group of five destroyer escorts led by the escort carrier Guadalcanal. U-505 was the first enemy man-of-war captured by the US Navy in battle on the high seas si nce 1815. JOHNW. HART Shiremanstown, Pennsylvania

Canadian Victory=US Liberty I was overjoyed to see "Saving the Cape Breton-a Canadian Equivalent to a Victory" in the Winter issue of Sea History, but to pick a nit, Cape Breton is not a US Victory equivalent. To briefly retrace the history: in September 1940 a UK team came to the US to place orders for 60 merchant ships, deadweight about 10,000 tons , single screw driven by a triple expansion steam engine with coal-burning boilers. These ships were all named with "Ocean" prefixes; when the US entered the war the design was further simplified with oilfired water tube boilers substituted for the coal-fired "Oceans," and the greatlyexpanded program was called the "Liberty Ship Program." In Canada, the UK team ordered Ocean-type ships from east and west coast yards. These ships had "Fort" and "Park" names. Engine production was closely coordinated with the US Liberty yards, with benefits to both nations. Canadian yards developed two design variations: an oil-fired, water tube boiler plant (like the Liberty), called the Victory, and a design which could burn either oil or coal, called the Canadian. Both used the same 2500ihp triple expansion engi ne. In the US, as war production increased, geared steam turbines became more avai lable, so six of the 18 yards building Libertys switched to an "improved Liberty" with either a 6000 or an 8500shp turbine engine-raising the speed from the 11 knot Liberty to 16 or 17 .5 SEA HISTORY 75, AUTUMN 1995

Setting History Straight Many thanks for your Sea History 73 comments on the final phase of WWII and the bomb. I was a combat aircrewman in a Privateer (PB4 Y-2) plane crew about to be deployed to the Far East when the war was so decisively brought to a close and the homeland invasion averted. This subject surely deserves to be set straight for the next generations. CDR ROBERT A. NICHOLS USNR (RET.) Dana Point, California ERRATA I am writing to clarify a point made in the article about the model of the Sea Cloud in the Spring '95 issue of Sea History. The vessel was not a wedding present. Marjorie Post and E. F. Hutton were married in 1920. Sea Cloud was built in 1931. It makes a nice story, and I have no idea what E. F. 's present to Marjorie was, but I am sure it wasn't Sea Cloud. The model, by the way, looks great. ED CASSIDY Naples, Florida Captain Cassidy, USCG (Ret.), has served as longtime skipper ofSea Cloud. Thank you for the copies of Sea Histmy 73 containing the story of Picton Castle. They will go out to my shareholders, supporters and prospective partners along with membership information. However, the photo of the bunk room in Joe Stanford's excellent article got mislabeled as being on the Picton Castle.

It is, of course, on the Wavertree. I used the Wavertree forecastle to make a mockup for planning purposes for my ship. DAN MORELAND New York, New York Reports in Sea History 73 inadvertently did a disservice to two historic US Coast Guard Cutters, as pointed out to us by Capt. Neale 0. Westfall, USCG (Ret.) of Portsmouth VA and John S. Stamford, Chief Quartermaster, USCG (Ret.) of Baldwin NY . In our list of surviving Pacific War Veteran Vessels in museums, USCGC Ingham's lifetime of service was shortened from 1936-1988 to 1936-1937. And our note about efforts to save the tug Hoga referred to the tug as the only remaining vessel to survive Pearl Harbor, when USCGC Taney was also there. Both these cutters were of the Secretary or Treasury class, served in Atlantic and Pacific theaters in WWII, carried out weather patrol, law enforcement and search and rescue operations, served in Vietnam and were retired in the 1980s. Taney is located at the Baltimore Maritime Museum and Ingham can be visited at Patriots Point, Mount Pleasant SC. Marc J. Cohen of Fort Lauderdale, Florida, pointed out that, in Sea History 74 Shipnotes, we incorrectly identified the battleship North Carolina as BB 25, when she is actually BB 55. Some of our members have noticed the statistical gaffe on the pink slip included with our recent Report to the Membership-a misplaced decimal brought the amount of $100 donations to $325,000 when the actual amount is $32,500. Now, here's a refreshing (and valid) statistic: as of31 August we received $17,235.42 from 494 members as a result of the Report to the Members mailing.-Eo.

•••••••••••••••••••• Each month we receive many inquiries about historic vessels, maritime history and marine antiques. We are unable to print the majority of the requests for information and, as a nonprofit organization, we do not give appraisals or facilitate the sale of items. However, we do invite you to place your request in the "Classified" section to reach our thousands of readers--a most knowledgeable collection of people with strong interests in the maritime field. Entries cost $1.60/word. Send in your ad with payment or call Carmen McCallum at 800-221-NMHS.)