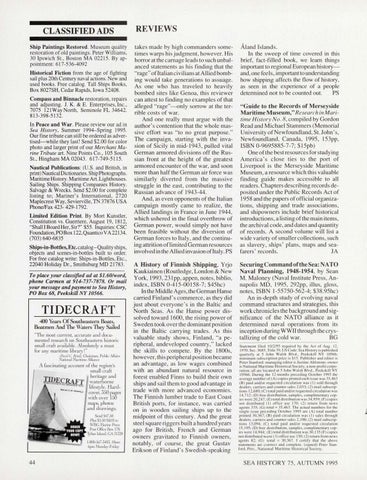 REVIEWS takes made by high commanders sometimes warps his judgment, however. His horror at the carnage leads to such unbalanced statements as his finding that the "rage" ofltalian civilians at Allied bombing would take generations to assuage. As one who has traveled to heavily bombed sites like Genoa, this reviewer can attest to finding no examples of that alleged "rage"--0nly sorrow at the terrible costs of war. And one really must argue with the author's contention that the whole massive effort was "to no great purpose." The campaign, starting with the invasion of Sicily in mid-1943, pulled vital German armored divisions off the Russian front at the height of the greatest armored encounter of the war, and soon more than half the German air force was similarly diverted from the massive struggle in the east, contributing to the Russian advance of 1943-44. And, as even opponents of the Italian campaign mostly came to realize, the Allied landings in France in June 1944, which ushered in the final overthrow of German power, would simply not have been feasible without the diversion of German forces to Italy , and the continuing attrition oflimited German resources involved in the Allied invasion ofltaly. PS

A History of Finnish Shipping, Yrjo Kaukiainen (Routledge, London & New To place your classified ad at $1.60/word, York, 1993, 231 pp, appen, notes, biblio, phone Carmen at 914-737-7878. Or mail your message and payment to Sea History, index, ISBN 0-415-00158-7; $45hc) In the Middle Ages, the German Hanse PO Box 68, Peekskill NY 10566. carried Finland's commerce, as they did just about everyone ' s in the Baltic and North Seas. As the Hanse power dissolved toward 1600, the rising power of 400 Years Of Southeastern Boats, Sweden took over the dominant position Boatmen And The Waters They Sailed in the Baltic carrying trades. As this "Th e most current, accurate and docuvaluable study shows, Finland, "a pemented research on Southeastern hi storic ripheral , undeveloped country," lacked small craft ava il ab le. Absolutely a mu st for any maritime library!" the skills to compete. By the 1800s, -/J1w1() C. BnidÂˇ, Chainnan, Public Affairs however, this peripheral position became 1 ational J\ \aririme All iance an advantage, as low wages combined A fascinating account of the region 's with an abundant natural resource in small craft heritage and forest enabled Finns to build their own waterborne ships and sail them to good advantage in lifesty le. Hardtrade with more advanced economies. cover, 350 pages The Finnish lumber trade to East Coast with over 150 maps. photos British ports, for instance, was carried a nd dra'vvings . on in wooden sailing ships up to the Send $47.50 midpoint of this century. And the great Plus $2.50 S& 1-1 to steel square riggers built a hundred years \VBC J\ \a1ine Press Post Oflice Box 178. ago for British, French and German Tybee Island, GA 31328 owners gravitated to Finnish owners, 1-800-567-3403, I Oamnotabl y, of course, the great Gustav 6pm Monday-F1iday Erikson of Finland 's Swedish-speaking

Aland Islands. In the sweep of time covered in this brief, fact-filled book, we learn things important to regional European historyand, one feels, important to understanding how shipping affects the flow of history, as seen in the experience of a people PS determined not to be counted out. "Guide to the Records of Merseyside Maritime Museum," Research in Maritime History No. 8, compiled by Gordon Read and Michael Stammers (Memorial University of Newfoundland, St. John ' s, Newfoundland, Canada, 1995, 153pp, ISBN 0-9695885-7-7; $15pb) One of the best resources for studying America's c lose ties to the port of Liverpool is the Merseyside Maritime Museum , a resource which this valuable finding guide makes accessible to all readers. Chapters describing records deposited under the Public Records Act of 1958 and the papers of official organizations, shipping and trade associations, and shipowners include brief historical introductions, a listing of the main items, the archival code, and dates and quantity of records. A second volume will list a wide variety of smaller collections, such as slavery, ships' plans, maps and seafarers' records. JA Securing Command of the Sea: NATO Naval Planning, 1948-1954, by Sean M. Maloney (Naval Institute Press, Annapolis MD, 1995, 292pp, illus, gloss, notes, ISBN 1-55750-562-4; $38.95hc) An in-depth study of evolving naval command structures and strategies, this work chronicles the background and significance of the NATO alliance as it determined naval operations from its inception during WWII through the crysBG tallizing of the cold war. S tatement filed I 0/2/95 required by 1he Act of Aug. 12. 1970. Sec. 3685 . Tit le 39, US Code: Sea History is published quarterl y at 5 John Wal sh Bl vd .. Peekskill NY 10566; minimum subscription pri ce is $ 15. Publi sher and editor is Peter Sranford: man aging edi1or is Ju stine Ah lstrom: ow ner is Nat io nal Maritime Histori cal Soc iety, a no n-profit corporation: all are located at 5 John Wal sh Bl vd._ Peeks kill NY I 0566. During the 12 months preceding October 1995 th e average number o f (A) copies printed each iss ue was 35,463 (B) paid and/or requested ci rc ulat io n was ( I) sold throu gh