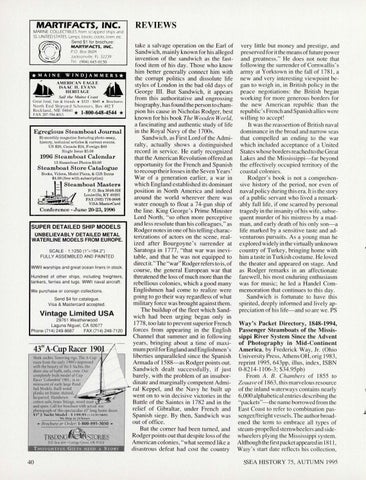 REVIEWS take a salvage operation on the Earl of Sandwich, mainly known for his alleged invention of the sandwich as the fastfood item of hi s day. Those who know him better generally connect him with the corrupt politics and dissolute life styles of London in the bad old days of George III. But Sandwich, it appears from this authoritative and engrossing biography, has found the person to champion hi s cause in Nicholas Rodger, best known for his book The Wooden World, a fascinating and authentic study of life in the Royal Navy of the 1700s. Sandwich, as First Lord of the Admiralty, actually shows a distinguished record in service. He early recognized that the American Revolution offered an opportunity for the French and Spanish to recoup their losses in the Seven Years&#39; War of a generation earlier, a war in which England establ ished its dominant position in North America and indeed around the world wherever there was water enough to float a 74-gun ship of the line. King George&#39;s Prime Mini ster Lord North , &quot;so often more perceptive and less resolute than hi s colleagues,&quot; as Rodgernotes in one of his telling characterizations of actors on the scene, real ized after Bourgoyne &#39; s surrender at Saratoga in 1777, &quot; that war was inevitable, and that he was not equipped to direct it. &quot; The &quot;war&quot; Rodger refers to is, of course, the general European war that threatened the loss of much more than the rebellious colonies, which a good many Engli shmen had come to realize were goi ng to go their way regardless of what military force was brought against them . The buildup of the fleet which Sandwich had been urging began only in I 778, too late to prevent superior French forces from appearing in the English Channel that summer and in following years, bringing abo ut a time of maximum peril for England and Englishmen &#39; s liberties unparalleled since the Spanish Armada of 1588-as Rodger points out. Sandwich dealt successfully, if just barely, with the problem of an insubordinate and marginally competent Admiral Keppel, and the Navy he built up went on to win decisive victories in the Battle of the Sai ntes in 1782 and in the relief of Gibraltar, under French and Spani sh siege. By then , Sandwich was out of office. But the corner had been turned, and Rodger points out that despite loss of the American colonies, &quot;what seemed like a disastrous defeat had cost the country

very little but money and prestige, and preserved for it the means of future power and greatness.&quot; He does not note that following the surrender of Cornwallis &#39;s army at Yorktown in the fa ll of I 78 I , a new and very interesting viewpoint began to weigh in , in British policy in the peace negotiations: the British began working for more generous borders for the new American republic than the republic&#39;s French and Spanish allies were willing to accept! It was the reassertion of British naval dominance in the broad and narrow seas that compelled an ending to the war which included acceptance of a United States whose borders reached to the Great Lakes and the Mississippi-far beyond the effectively occup ied territory of the coasta l colonies. Rodger &#39;s book is not a comprehensive history of the period, nor even of naval policy during this era. It is the story of a public servant who lived a remarkably full life, if one scarred by personal tragedy in the insanity of his wife, subsequent murder of hi s mistress by a madman, and early death of hi s only son-a life marked by a sensitive taste and adventurous pursuits. As a yo ung man he explored widely in the virtually unknown country of Turkey, bringing home with him a taste in Turkish costume. He loved the theater and appeared on stage. And as Rodger remarks in an affectionate farewell, hi s most enduring enthusiasm was for music; he led a Handel Commemoration that continues to this day. Sandwich is fortunate to have this spirited, deeply informed and lively appreciation of his life-and so are we. PS Way&#39;s Packet Directory, 1848-1994, Passenger Steamboats of the Mississippi River System Since the Advent of Photography in Mid-Continent America, by Frederick Way, Jr. (Ohio University Press, Athens OH, orig I 983 , reprint 1995 , 643pp, illus, index , ISBN 0-8214-1106-3 ; $34.95pb) From A . B. Chambers of 1855 to Zouave of I 863 , this marvelous resource of the inland waterways contains nearly 6,000 alphabetical entries describing the &quot;packets&quot; -the name borrowed from the East Coast to refer to combination passenger/freight vessels. The author broadened the term to embrace all types of stea m-propelled stern wheelers and sidewh(eelers plying the Mississippi system. Altthough the first packet appeared in 181 I , Wmy &#39; s start date reflects hi s collection, SSEA HISTORY 75 , AUTUMN 1995