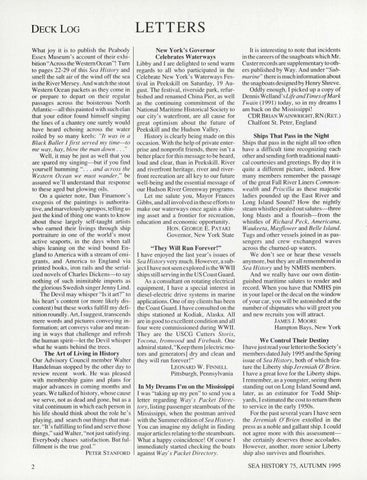 DECK LOG What joy it is to publish the Peabody Essex Museum's account of their exhibition "Across the Western Ocean"! Tum to pages 22-29 of this Sea History and smell the salt air of the wind off the sea in the River Mersey. And watch the stout Western Ocean packets as they come in or prepare to depart on their regular passages across the boisterous North Atlantic-all this painted with such elan that your editor found himself singing the lines of a chantey one surely would have heard echoing across the water roiled by so many keels: "It was in a Black Baller I first served my time- to me way, hay, blow the man down ... " Well, it may be just as well that you are spared my singing-but if you find yourself humming" ... and across the Western Ocean we must wander," be assured we'll understand that response to these aged but glowing oils. On a quieter note, Dan Finamore's exegesis of the paintings is authoritative, and marvelously apropos, telling us just the kind of thing one wants to know about these largely self-taught artists who earned their livings through ship portraiture in one of the world's most active seaports, in the days when tall ships leaning on the wind bound England to America with a stream of emigrants, and America to England via printed books, iron rails and the serialized novel s of Charles Dickens-to say nothing of such inimitable imports as the glorious Swedish singer Jenny Lind. The Devil may whisper "Is it art?" to his heart 's content (or more likely discontent) but these works fulfill my definition roundly. Art, I suggest, transcends mere words and pictures conveying information; art conveys value and meaning in ways that challenge and refresh the human spirit-let the Devil whisper what he wants behind the trees.

The Art of Living in History Our Advisory Council member Walter Handelman stopped by the other day to review recent work. He was pleased with membersh ip gai ns and plans for major advances in com ing months and years. We talked of hi story, whose cause we serve, not as dead and gone, but as a vital continuum in which each person in hi s life should think abo ut the role he's playing, and search out things that matter. " It 's fulfilling to find and serve those things," said Walter, "not just satisfying. Everybody chases satisfaction. But fulfillment is the true goal." PETER STANFORD

New York's Governor Celebrates Waterways Libby and I are delighted to send warm regards to all who participated in the Celebrate New York ' s Waterways Festival in Peekskill on Saturday, 19 August. The festival, riverside park, refurbished and renamed China Pier, as well as the continuing commitment of the National Maritime Historical Society to our city's waterfront, are all cause for great optimism about the future of Peekskill and the Hudson Valley. History is clearly being made on this occasion. With the help of private enterprise and nonprofit friends, there isn't a better place for this message to be heard, loud and clear, than in Peekskill. River and riverfront heritage, river and riverfront recreation are all key to our future well-being and the essential message of our Hudson River Greenway programs. Let me salute you, Mayor Frances Gibbs, and all involved in these efforts to make our waterways once again a shining asset and a frontier for recreation, education and economic opportunity. HON. GEORGE E. PATAKI Governor, New York State

"They Will Run Forever!" I have enjoyed the last year's issues of Sea History very much. However, a subject I have not seen explored is the WWII ships still serving in the US Coast Guard. As a consultant on rotating electrical equipment, I have a special interest in diesel-electric drive systems in marine applications. One of my clients has been the Coast Guard. I have consulted on the ships stationed at Kodiak, Alaska. All are in good to excellent condition and all four were commissioned during WWII. They are the USCG Cutters Storis, Yocona, Ironwood and Firebush. One admiral stated, "Keep them [electric motors and generators] dry and clean and they will run forever!" LEONARD W. FINNELL

Pittsburgh, Pennsy lvania In My Dreams I'm on the Mississippi I was "taking up my pen" to send you a letter regarding Way's Packet Directory, listing passenger steamboats of the Mississippi, when the postman arrived with the Summer edition of Sea History. You can imagine my delight in finding major articles relating to the steamboats. What a happy coincidence! Of course I immediately started checking the boats against Way's Packet Directory.

It is interesting to note that incidents in the careers of the snagboats which Mr. Custer records are supplementary toothers published by Way. And under "Submarine" there is much information about the snag boats designed by Henry Shreve. Oddly enough, I picked up a copy of DennisWelland'slifeandTimesofMark Twain (1991) today, so in my dreams I am back on the Mississippi! CDRBRIANW AINWRTGHT,RN (RET.)

Ships That Pass in the Night Ships that pass in the night all too often have a difficult time recognizing each other and sending forth traditional nautical courtesies and greetings. By day it is quite a different picture, indeed. How many members remember the passage of the great Fall River Liners Commonwealth and Priscilla as these majestic ladies pounded up the East River and Long Island Sound? How the nightly steam whistles pealed out salutes-three long blasts and a flourish-from the whistles of Richard Peck, Americana, Waukeeta, Mayflower and Belle Island. Tugs and other vessels joined in as passengers and crew exchanged waves across the churned-up waters. We don't see or hear these vessels anymore, but they are all remembered in Sea History and by NMHS members. And we really have our own distinguished maritime salutes to render and record. When you have that NMHS pin in your lapel or the decal on the window of your car, you will be astonished at the number of shipmates who will greet you and new recruits you will attract. JAMES J. MOORE

We Control Their Destiny I have just read your letter to the Society's members dated July 1995 and the Spring issue of Sea History, both of which feature the Liberty sh ip Jeremiah O'Brien. I have a great love for the Liberty ships. I remember, as a youngster, seeing them standing out on Long Island Sound and, later, as an estimator for Todd Shipyards, I estimated the cost to return them to service in the early 1950s. For the past several years I have seen the Jeremiah 0' Brien extolled in the press as a noble and gallant ship. I could not agree more with this assessmentshe certain ly deserves those accolades. However, another, more sen ior Liberty ship also survives and flourishes. SEA HISTORY 75, AUTUMN 1995