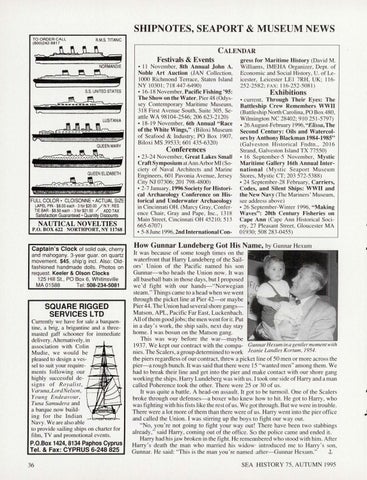 SQUARE RIGGED SERVICES LTD Currently we have for sale a barquentine, a brig, a brigantine and a threemasted gaff schooner for immediate delivery. Alternatively, in association with Colin Mudie, we would be pleased to design a vessel to suit your requirements following our highly successful de- +-~~olit-.Ji. signs of Royalist, ..J,;:::::;;~r; Varuna, LordNelson, Young Endeavour, Tuna Samudera and a barq ue now building for the Indian Navy. We are also able to provide sailing ships on charter for fi lm , TV and promotional events. P.O.Box 1424, 8134 Paphos Cyprus

How Gunnar Lundeberg Got His Name, by Gunnar Hexum It was because of some tough times on the waterfront that Harry Lundeberg of the Sailors ' Union of the Pacific named his son Gunnar-who heads the Union now . It was all baseball bats in those days, but I proposed we ' d fight with our hands- "Norwegian steam." Things came to a head when we went through the picket line at Pier 42-or maybe Pier44. The Union had several shore gangsMatson , APL, Pacific Far East, Luckenbach. A ll of them good jobs; the men went for it. Put in a day 's work, the ship sails, next day stay home. I was bosun on the Matson gang. This was way before the war-maybe 1937. We kept our contract with the compa- GunnarHexuminagentlermomentwith nies. The Scalers, a group determined to work Jeanie Land/es Kortum , 1954. the piers regardless of our contract, threw a picket line of 50 men or more across the pier-a rough bunch. It was said that there were 15 "wanted men" among them . We had to break their line and get into the pier and make contact with our shore gang working the ships. Harry Lundeberg was with us. I took one side of Harry and a man called Poherence took the other. There were 25 or 30 of us. It was quite a battle. A head-on assault. It got to be turmoil. One of the Scalers broke through our defenses-a boxer who knew how to hit. He got to Harry, who was fighting with his fists like the rest of us. We got through . But we were in trouble. There were a lot more of them than there were of us. Harry went into the pier office and called the Union. I was stirring up the boys to fight our way out. " No, you 're not going to fight your way out! There have been two stabbings already ," said Harry, coming out of the office. SC> the police came and ended it. Harry had his jaw broken in the fight. He remennbered who stood with him . After Harry 's death the man who married his widow' introduced me to Harry 's son, .:t Gunnar. He said: "This is the man you're named ;after-Gunnar Hexum. " SEA HISTORY 75, AUTUMN 1995