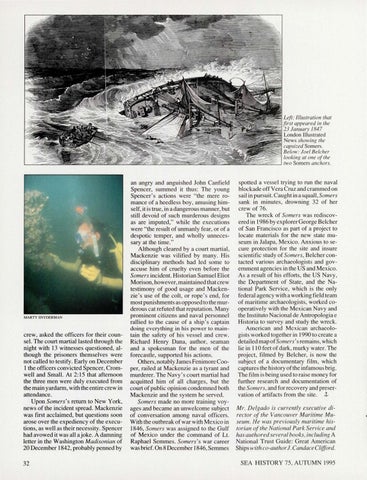 Left: Illustration that first appeared in the 23 January 1847 London Illustrated News showing the capsized Somers. Below: Joel Belcher looking at one of the two Somers anchors.

crew, asked the officers for their counsel. The court martial lasted through the night with 13 witnesses questioned , although the pri soners themselves were not called to testify. Early on December 1 the officers convicted Spencer, Cromwell and Small. At 2: 15 that afternoon the three men were duly executed from the main yardarm, with the entire crew in attendance. Upon Somers&#39;s return to New York, news of the incident spread. Mackenzie was first acclaimed, but questions soon arose over the expediency of the executions, as well as their necessity. Spencer had avowed it was all a joke. A damning letter in the Washington Madisonian of 20 December 1842, probably penned by 32

an angry and anguished John Canfield Spencer, summed it thus: The young Spencer&#39;s actions were &quot;the mere romance of a heedless boy, amusing himself, it is true, in a dangerous manner, but still devoid of such murderous designs as are imputed,&quot; while the executions were &quot; the result of unmanly fear, or of a despotic temper, and wholly unnecessary at the time.&quot; Although cleared by a court martial, Mackenzie was vilified by many. His disciplinary methods had led some to accuse him of cruelty even before the Somers incident. Historian Samuel Eliot Morison, however, maintained that crew testimony of good usage and Mackenzie&#39;s use of the colt, or rope&#39;s end, for most punishments as opposed to the murderous cat refuted that reputation. Many prominent citizens and naval personnel rallied to the cause of a ship &#39;s captain doing everything in his power to maintain the safety of his vessel and crew. Richard Henry Dana, author, seaman and a spokesman for the men of the forecastle, supported his actions. Others, notably James Fenimore Cooper, railed at Mackenzie as a tyrant and murderer. The Navy&#39;s court martial had acquitted him of all charges, but the court of public opinion condemned both Mackenzie and the system he served. Somers made no more training voyages and became an unwelcome subject of conversation among naval officers. With the outbreak of war with Mexico in 1846, Somers was assigned to the Gulf of Mexico under the command of Lt. Raphael Semmes. Somers&#39;s war career was brief. On 8 December 1846, Semmes

spotted a vessel trying to run the naval blockade off Vera Cruz and crammed on sail in pursuit. Caught in a squall , Somers sank in minutes, drowning 32 of her crew of 76. The wreck of Somers was rediscovered in 1986 by explorer George Belcher of San Francisco as part of a project to locate materials for the new state museum in Jalapa, Mexico. Anxious to secure protection for the site and insure scientific study of Somers, Belcher contacted various archaeologists and government agencies in the US and Mexico. As a res ult of his efforts, the US Navy, the Department of State, and the National Park Service, which is the only federal agency with a working field team of maritime archaeologists, worked cooperatively with the Mexican Navy and the Instituto Nacional de Antropologia e Hi storia to survey and study the wreck. American and Mexican archaeologists worked together in 1990 to create a detailed map of Somers&#39;s remains, which lie in 110 feet of dark, murky water. The project, filmed by Belcher, is now the subject of a documentary fi lm , which captures the hi story of the infamous brig. The fi lm is being used to raise money for further research and documentation of the Somers, and for recovery and preservation of artifacts from the site. ,!,