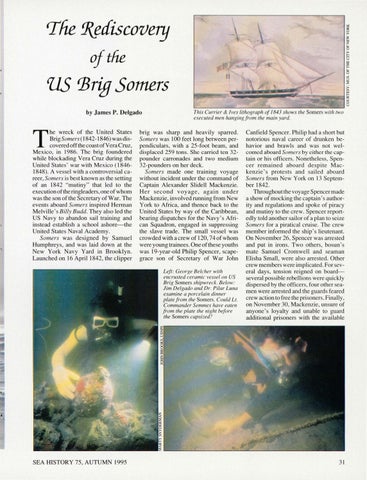 he wreck of the United States Brig Somers ( 1842-1846) was discovered off the coast of Vera Cruz, Mexico, in 1986. The brig foundered while blockading Vera Cruz during the United States&#39; war with Mexico ( 18461848). A vessel with a controversial career, Somers is best known as the setting of an 1842 &quot; mutiny&quot; that led to the execution of the ringleaders, one of whom was the son of the Secretary of War. The events aboard Somers inspired Herman Melville &#39;s Billy Budd. They also led the US Navy to abandon sail training and instead establish a school ashore-the United States Naval Academy. Somers was designed by Samuel Humphreys, and was laid down at the New York Navy Yard in Brooklyn. Launched on 16 April 1842, the clipper

This Currier &amp; Ives lithograph of 1843 shows the Somers with two executed men hanging from the main yard.

brig was sharp and heavily sparred. Somers was 100 feet long between perpendiculars, with a 25-foot beam, and displaced 259 tons. She carried ten 32pounder carronades and two medium 32-pounders on her deck. Somers made one training voyage without incident under the command of Captain Alexander Slidell Mackenzie. Her second voyage, again under Mackenzie, involved running from New York to Africa, and thence back to the United States by way of the Caribbean, bearing dispatches for the Navy &#39;s African Squadron, engaged in suppressing the slave trade. The small vessel was crowded with a crew of 120, 74ofwhom were young trainees. One of these youths was 19-year-old Philip Spencer, scapegrace son of Secretary of War John Left: George Belcher with encrusted ceramic vessel on US Brig Somers shipwreck. Below: Jim Delgado and Dr. Pilar Luna examine a porcelain dinner plate from the Somers. Could Lt. Commander Semmes have eaten from the plate the night before the Somers capsized?

Canfield Spencer. Philip had a short but notorious naval career of drunken behavior and brawls and was not welcomed aboard Somers by either the captain or hi s officers. Nonetheless, Spencer remained aboard despite Mackenzie &#39;s protests and sailed aboard Somers from New York on 13 September 1842. Throughout the voyage Spencer made a show of mocking the captain&#39;s authority and regulations and spoke of piracy and mutiny to the crew. Spencer reportedly told another sailor of a plan to seize Somers for a piratical cruise. The crew member informed the ship&#39;s lieutenant. On November 26, Spencer was arrested and put in irons. Two others, bosun &#39;s mate Samuel Cromwell and seaman Elisha Small, were also arrested. Other crew members were implicated. For several days, tension reigned on boardseveral possible rebellions were quickly di spersed by the officers, four other seamen were arrested and the guards feared crew action to free the prisoners. Finally, on November 30, Mackenzie, unsure of anyone &#39;s loyalty and unable to guard additional prisoners with the available