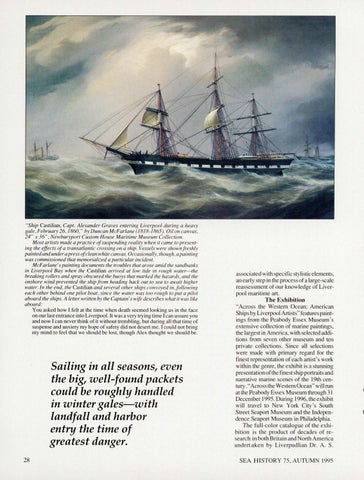 "Ship Casti lian, Capt . Alexander Graves entering Liverpool during a heavy gale, February 26, 1860," by Duncan McFarlane ( 1818-1865). Oil on canvas, 24" x 36" , Newburyport Custom House Maritime Museum Collection. Most artists made a practice of suspending reality when it came to presenting the effects of a transatlantic crossing on a ship. Vessels were shown freshly painted and under a press ofclean white canvas. Occasionally, though, a painting was commissioned that memorialized a particular incident. McFarlane' s painting documents the troubles that arose amid the sandbanks in Liverpool Bay when the Castilian arrived at low tide in rough water--the breaking rollers and spray obscured the buoys that marked the hazards, and the onshore wind prevented the ship from heading back out to sea to await higher water. In the end, the Castilian and several other ships convoyed in.following each other behind one pilot boat, since the water was too rough to put a pilot aboard the ships. A letter written by the Captain's wife describes what it was like aboard: You asked how I fe lt at the time when death seemed looking us in the face on our last entrance into Liverpool. It was a very trying time I can assure you and now I can never thi nk of it without trembling, but during all that time of suspense and anxiety my hope of safety did not desert me. I could not bring my mind to fee l that we should be lost, though Alex thought we should be.

Sailing in all seasons, even the big, well-found packets could be roughly handled in winter gales-with landfall and harbor entry the time of greatest danger. 28

associated with specific stylistic elements, an early step in the process of a large-scale reassessment of our knowledge of Liverpool maritime art. The Exhibition "Across the Western Ocean: American Ships by Liverpool Artists"features paintings from the Peabody Essex Museum ' s extensive collection of marine paintings, the largest in America, with selected additions from seven other museum and ten private collections. Since all selections were made with primary regard for the finest representation of each artist's work within the geme, the exhibit is a stunning presentation of the finest ship portraits and narrative marine scenes of the 19th century. " Across the Western Ocean" will run at the Peabody Essex Museum through 3 1 December 1995. During 1996, the exhibit will travel to New York City 's South Street Seaport Museum and the Independence Seaport Museum in Philadelphia. The full-color catalogue of the exhibition is the product of decades of research in both Britain and North America undert:aken by Liverpudlian Dr. A. S. SEA HISTORY 75 , AUTUMN 1995