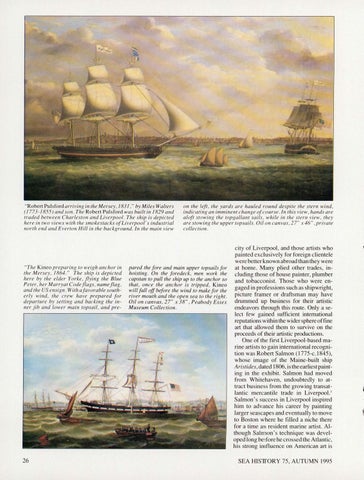 "Robert Puls ford arriving in the Mersey , 1831 ," by Miles Walters ( 1773 -1855) and son. Th e Robert Puls ford was built in 1829 and traded between Charleston and Liverpool. Th e ship is depicted here in two views with th e smokestacks of Liverpool's industrial north end and Everton Hill in the background . In the main view

on th e left , the yards are hauled round despite th e stern wind , indicating an imminent change of course . In this view, hands are aloji stowing the topgallant sails , while in th e stern view , they are stowing the upper topsails. Oil on canvas, 27" x46" , private collection.

pared the fore and main upper topsails for hoisting. On the forede ck, men work the capstan to pull the ship up to the anchor so that , once the anchor is tripped, Kineo will fall off before the wind to make for the river mouth and the open sea to the right. Oil on canvas, 27" x 38" , Peabody Essex Museum Collection.

city of Liverpool , and those artists who painted exclusively for foreign clientele were better known abroad than they were at home. Many plied other trades, including those of house painter, plumber and tobacconist. Those who were engaged in professions such as shipwright, picture framer or draftsman may have drummed up business for their artistic endeavors through this route. Only a select few gained sufficient international reputations within the wider sphere of fine art that allowed them to survive on the proceeds of their artistic productions. One of the first Liverpool-based marine artists to gain international recognition was Robert Salmon (1775-c.1845) , whose image of the Maine-built ship Aristides, dated 1806, is the earliest painting in the exhibit. Salmon had moved from Whitehaven, undoubtedly to attract business from the growing transatlantic mercantile trade in Liverpool.' Salmon ' s success in Liverpool inspired him to advance his career by painting larger seascapes and eventually to move to Boston where he filled a niche there for a time as resident marine artist. Although Salrrnon 's technique was developed long be!fore he crossed the Atlantic, his strong imfluence on American art is SEA HISTrORY 75 , AUTUMN 1995