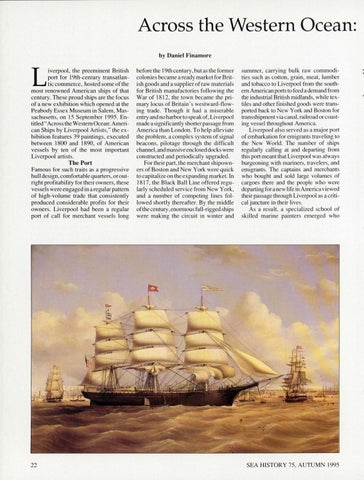 Across the Western Ocean: by Daniel Finamore

iverpool , the preeminent British port for 19th-century transatlantic commerce, hosted some of the most renowned American ships of that century. These proud ships are the focus of a new exhibition which opened at the Peabody Essex Museum in Salem, Massachusetts, on 15 September 1995. Entitled &quot;Across the Western Ocean: American Ships by Liverpoo l Artists,&quot; the exhibition features 39 paintings, executed between 1800 and 1890, of American vessels by ten of the most important Liverpool artists. The Port Famous for such traits as a progressive hull design , comfortable quarters, or outright profitability for their owners, these vessels were engaged in a regular pattern of high-volume trade that consistently produced considerable profits for their owners. Liverpoo l had been a regular port of call for merchant vessels long

before the 19th century, but as the former colonies became a ready market for British goods and a supplier of raw materials for British manufac tories following the War of 1812, the town became the primary locus of Britain&#39;s westward-flowing trade. Though it had a mi serable entry and no harbor to speak of, Liverpool made a significantly shorter passage from America than London. To help alleviate the problem, a complex system of signal beacons, pilotage thro ugh the difficult channel, and massive enclosed docks were constructed and period ically upgraded. For their part, the merchant shipowners of Boston and New York were quick to capitalize on the ex panding market. In 1817 , the Black Ball Line offered regularly scheduled service from New York, and a number of com peti ng lines followed shortly thereafter. By the middle of the century , enormous full-ri gged ships were making the circuit in winter and

summer, carrying bulk raw commodities such as cotton, grain, meat, lumber and tobacco to Liverpool from the southern American ports to feed a demand from the industrial British midlands, while textiles and other finished goods were transported back to New York and Boston for transshipment via canal, rai Iroad or coasting vessel throughout America. Liverpool also served as a major port of embarkation fo r emigrants traveling to the New World. The number of ships regularly calling at and departing from this port meant that Liverpool was always burgeoning with mariners, travelers, and emigrants. The captains and merchants who bought and sold large volumes of cargoes there and the people who were departing fora new life in America viewed their passage through Liverpool as a critical juncture in their lives. As a result, a speciali zed school of skilled marine painters emerged who