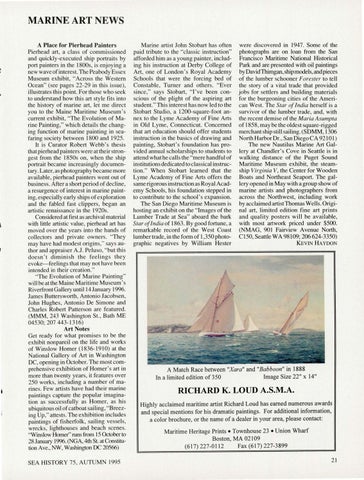 Pierhead art, a class of commissioned and quickly-executed ship portraits by port painters in the 1800s, is enjoying a new wave of interest. The Peabody Essex Museum exhibit, &quot;Across the Western Ocean&quot; (see pages 22-29 in this issue), illustrates this point. For those who seek to understand how this art style fits into the history of marine art, let me direct you to the Maine Maritime Museum &#39;s current exhibit, &quot;The Evolution of Marine Painting,&quot; which details the changing function of marine painting in seafaring society between 1800 and 1925. It is Curator Robert Webb&#39;s thesis that pierhead painters were at their strongest from the 1850s on, when the ship portrait became increasingly documentary. Later, as photography became more available, pierhead painters went out of business. After a short period of decline, a resurgence of interest in marine painting, especially early ships of exploration and the fabled fast clippers, began an artistic renaissance in the 1920s. Considered at first as archival material with little artistic value, pierhead art has move d over the years into the hands of collectors and private owners. &quot;They may have had modest origins,&quot; says author and appraiser A.J. Pelu so, &quot;but thi s does n &#39; t dimini sh the feelings they evoke-feelings that may not have been intended in their creation.&quot; &quot;The Evolution of Marine Painting&quot; will be at the Maine Maritime Museum &#39;s Riverfront Gallery unti I 14 January 1996. James Buttersworth , Antonio Jacobsen, John Hughes, Antonio De Simone and Charles Robert Patterson are featured. (MMM, 243 Washington St., Bath ME 04530; 207 443-1316)

Marine artist John Stobart has often paid tribute to the &quot;classic instruction&quot; afforded him as a young painter, including his instruction at Derby College of Art, one of London&#39;s Royal Academy Schools that were the forcing bed of Constable, Turner and others. &quot;Ever since,&quot; says Stobart, &quot; I&#39;ve been conscious of the plight of the aspiring art student.&quot; This interest has now led to the Stobart Studio, a 1200-square-foot annex to the Lyme Academy of Fine Arts in Old Lyme, Connecticut. Concerned that art education should offer students instruction in the basics of drawing and painting, Stobart&#39;s foundation has provided ann ual scholarships to students to attend what he calls the &quot; mere handfu I of institutions dedicated to classical instruction. &quot; When Stobart learned that the Lyme Academy of Fine Arts offers the same rigorous instruction as Royal Academy Schools, his foundation stepped in to contribute to the school&#39;s expansion. The San Diego Maritime Museum is hosting an exhibit on the &quot; Images of the Lumber Trade at Sea&quot; aboard the bark Star ofIndia of 1863. By good fortune, a remarkable record of the West Coast lumber trade, in the form of 1,350 photographic negatives by William Hester

were discovered in 1947. Some of the photographs are on loan from the San Francisco Maritime National Historical Park and are presented with oil paintings by David Thimgan, ship models, and pieces of the lumber schooner Forester to tell the story of a vital trade that provided jobs for settlers and building materials for the burgeoning cities of the American West. The Star of India herself is a survivor of the lumber trade, and, with the recent demi se of the Maria Asumpta of 1858, may be the oldest square-rigged merchant ship still sailing. (SDMM, 1306 North Harbor Dr., San Diego CA 92101) The new Nautilus Marine Art Gallery at Chandler&#39;s Cove in Seattle is in walking distance of the Puget Sound Maritime Museum exhibit, the steamship Virginia V, the Center for Wooden Boats and Northeast Seaport. The gallery opened in May with a group show of marine artists and photographers from across the Northwest, including work by acclaimed artist Thomas Wells. Original art, limited edition fine art prints and quality posters will be available, with most artwork priced under $500. (NMAG, 901 Fairview Avenue North, Cl50, Seattle WA 98109; 206 624-3350) KEVIN HA YOON

Art Notes Get ready for what promises to be the exhibit nonpareil on the life and works of Winslow Homer (1836-1910) at the Nafional Gallery of Art in Washington DC, opening in October. The most comprehensive exhibition of Homer&#39;s art in more than twenty years, it features over 250 works, including a number of marines. Few artists have had their marine paintings capture the popular imagination as successfully as Homer, as his ubiquitous oil of catboat sailing, &quot;Breezing Up,&quot; attests. The exhibition includes paintings of fi sherfolk, sailing vessels, wrecks, lighthouses and beach scenes. &quot;Winslow Homer&quot; runs from 15 October to 28 January 1996. (NGA, 4th St. at Constitution Ave., NW, Washington DC 20566) SEA HISTORY 75 , AUTUMN 1995