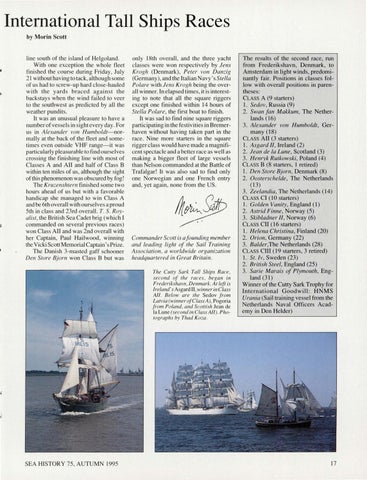 line south of the island of Helgoland . With one exception the whole fleet finished the course during Friday, July 21 without having to tack, although some of us had to screw-up hard c lose-hauled with the ya rd s brace d aga in st the backstays when the wind failed to veer to the southwest as predicted by all the weather pundits. It was an unusual pleasure to have a number of vessels in sight every day . For us in Alexander von Humboldt- normally at the back of the fleet and sometimes even outside VHF range-it was particularly pleasurable to find ourselves crossing the fini shing line with most of Classes A and AU and half of Class B within ten miles of us, although the sight of this phenomenon was obscured by fog! The Kruzenshtern finished some two hours ahead of us but with a favorable handicap she managed to win Class A and be 6th overall with ourselves a proud 5th in class and 23rd overall. T. S. Royalist, the British Sea Cadet brig (which I commanded on several previous races) won Class AII and was 2nd overall with her Captain, Paul Hailwood , winning the Vicki Scott Memorial Captain &#39;s Prize. The Dani sh 3-masted gaff schooner Den Store Bjorn won Class B but was

only 18th overall , and the three yacht classes were won respectively by Jens Krogh (Denmark), Peter von Danzig (Germany), and the Italian Navy &#39;s Stella Po/are with Jens Krogh being the overall winner. In elapsed times, it is interesting to note that all the square riggers except one fini shed within 14 hours of Stella Polare, the first boat to finish . It was sad to find nine square riggers participating in the festivities in Bremerhaven without having taken part in the race. Nine more starters in the square rigger class would have made a magnificent spectacle and a better race as well as making a bigger fleet of large vessels than Nelson commanded at the Battle of Trafalgar! It was also sad to find only one Norwegian and one French entry and, yet again, none from the US.

Commander Scott is a f ounding member and leading light of the Sail Training Association, a worldwide organization headquartered in Great Britain. The Cutty Sark Tall Ships Race, second of the races, bega n in Frederikshavn, Denmark. At left is Ireland&#39;s Asgard II, winner in Class All. Below are the Sedov from Latvia (winner ofClass A), Pogoria from Poland, and Scottish Jean de la Lune (second in Class All). Photographs by Thad Koza.