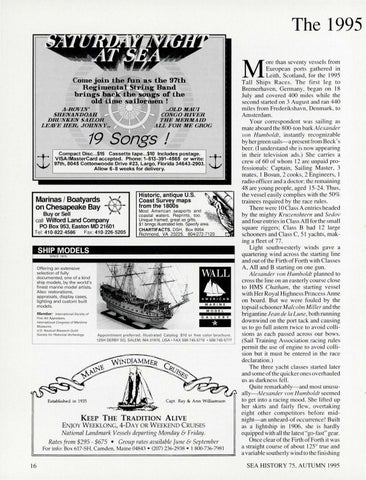 •• OLD MAUI CONGO RIVER THE MERMAID ALL FOR ME GROG

Marinas I Boatyards on Chesapeake Bay Buy or Sell

ore than seventy vessels from European ports gathe red in Leith , Scotland , for the 1995 Tall Ships Races . The fir st leg to Bremerhave n, Ge1many, began on 18 July and covered 400 miles while the second started on 3 August and ran 440 miles from Frederikshav n, Denm ark, to Amsterdam. Your correspondent was sailing as mate aboard the 800-ton bark Alexander von Humboldt, instantly recognizable by her green sails- a present fro m Beck &#39; s beer. (I understand she is now appearing in the ir telev ision ads.) She carries a crew of 60 of whom 12 are unpaid profess ionals: Captain, Sailing Mas ter, 3 mates, I Bosun , 2 cooks, 2 Engineers, I radio offi cer and a doctor; the remaining 48 are yo ung people, aged 15-24 . Thu s, the vessel easil y complies with the 50% trainees required by the race ru les. There were I 0 C lass A entri es headed by the mi ghty Kru zenshtern and Sedov and four entri es in Class All for the small square ri ggers; Class B had 12 large schooners and C lass C, 51 yac hts, making a fl eet of 77. Li ght southwesterl y winds gave a quartering wind ac ross the starting line and out of the Firth of Forth with Classes A, All and B starting on one gun. Alexander von Humboldt pl anned to cross the line on an easterl y course cl ose to HMS Chatham, the starting vessel with Her Royal Hi ghness Princess Anne on board . But we were foul ed by the topsaiI schooner Malcolm Mill er and the bri gantine l ean de la l une, both running downwind on the port tack and causing us to go full astern twice to avoid collisions as each passed across our bows. (Sail Trai ning Association racing rules permit the use of engine to avoid collision but it must be entered in the race decl aration.) The three yacht classes started late r and some of the quicker ones overhau led us as darkness fe ll. Quite remarkably-and most unusuall y-A lexander von Humboldt seemed to get into a racing mood. She lifted up her skirts and fa irl y flew, overtaking e ight othe r competitors before midnight-an unheard-of occurrence ! Built as a lightship in 1906, she is hardl y equipped with all the latest &quot;go-fast&quot; gear. Once clear of the Firth of Forth it was a straight course of about 125° true and a variable southerl y wind to the fini shing SEA HISTORY 75 , AUTUMN 1995