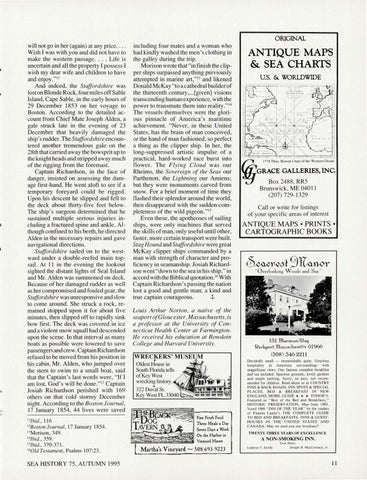 ORIGINAL will not go in her (again) at any price .. . . Wish I was with you and did not have to make the western passage . ... Life is uncertain and all the property I possess I wish my dear wife and children to have and enjoy.&quot; 11 And indeed, the Staffo rdshire was lost on Blonde Rock, four miles off Sable Island, Cape Sable, in the early hours of 29 December 1853 on her voyage to Boston. According to the detailed account from Chief Mate Joseph Alden, a gale struck late in the evening of 23 December that heavily damaged the ship &#39;s rudder. The Staffordshire encountered another tremendous gale on the 28th that carried away the bowsprit up to the knight heads and stripped away much of the rigging from the foremast. Captain Richardson, in the face of danger, insisted on assess ing the damage first-hand. He went aloft to see if a temporary foreyard could be rigged. Upon his descent he slipped and fell to the deck about thirty-five fee t below. The ship &#39;s surgeon determined that he sustained multiple serious injuries including a fractured spine and ankle. Although confined to his berth , he directed Alden in the necessary repairs and gave navigational directions. Staffordshire sailed on to the westward under a double-reefed main topsail. At 11 in the evening the lookout sighted the di stant lights of Seal Island and Mr. Alden was summoned on deck. Because of her damaged rudder as well as her compromised and fo uled gear, the Staffordshire was unresponsive and slow to come around . She struck a rock, remained stopped upon it for about fi ve minutes, then slipped off to rapidly sink bow first. The deck was covered in ice and a violent snow squall had descended upon the scene. In that interval as many boats as possible were lowered to save passengers and crew. Captain Richardson refu sed to be moved from his position in his cabin. Mr. Alden, who jumped over the stem to swim to a small boat, said that the Captain &#39; s last words were, &quot;If I am lost, God &#39;s will be done.&quot; 12 Captain Josiah Richardson perished with 169 others on that cold stormy December night. According to the Boston Journal, 17 January 1854, 44 lives were saved 11

including fo ur mates and a woman who had kindly washed the men&#39;s clothing in the galley during the trip. Morison wrote that &quot;in fini sh the clipper ships surpassed anything previously attempted in marine art,&quot; 13 and likened Donald McKay &quot;to a cathedral builder of the thirteenth century,... [given] visions transcending human experience, with the power to transmute them into reality.&quot; 14 The vessels themselves were the glorious pinnacle of America &#39; s maritime achievement. &quot;Never, in these United States, has the brain of man conceived, or the hand of man fas hioned, so perfect a thing as the clipper ship. In her, the long-suppressed artistic impulse of a practical, hard-worked race burst into fl ower. The Flying Cloud was our Rheims, the Sovereign of the Seas our Parthenon, the Lightning our Amiens; but they were monuments carved from snow. For a brief moment of time they fl ashed their splendor around the world, then disappeared with the sudden completeness of the wild pigeon.&quot; 15 Even these, the apotheoses of sailing ships, were only machines that served the skills of man, only useful until other, fas ter, more certain transport were built. Stag Hound and Staffordshire were great McKay clipper ships commanded by a man with strength of character and proficiency in seamanship. Josiah Richardson went &quot;down to the sea in his ship,&quot; in accord with the Biblicalquotation. 16 With Captain Richardson &#39; s passing the nation lost a good and gentle man ; a kind and .t true captain courageous.

Louis Arthur Norton, a native of the seaport of Gloucester, Massachusetts, is a prof essor at the University of Connecticut Health Center at Farmington. He received his education at Bowdoin College and Harvard University. WREC~ERS &#39;

Call or write fo r li stings of your. specific areas of interest

Yo ur Hos1s: Dwight B. Maccormack. Jr.