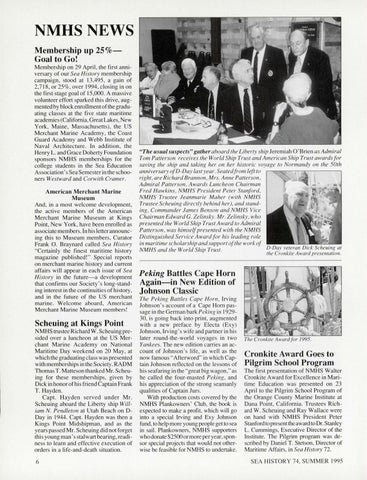 NMHSNEWS Membership up 25%Goal to Go! Membership on 29 April, the first anniversary of our Sea History membership campaign, stood at 13,495, a gain of 2,718, or 25%, over 1994, closing in on the first stage goal of 15,000. A massive volunteer effort sparked this drive, augmented by block enrollment of the graduating classes at the five state maritime academies (California, Great Lakes, New York, Maine, Massachusetts), the US Merchant Marine Academy, the Coast Guard Academy and Webb Institute of Naval Architecture. In addition, the Henry L. and Grace Doherty Foundation sponsors NMHS memberships for the college students in the Sea Education Association&#39;s Sea Semester in the schooners Westward and Corwith Cramer.

Scheuing at Kings Point NMHS trustee Richard W. Scheuing presided over a luncheon at the US Merchant Marine Academy on National Maritime Day weekend on 20 May, at which the graduating class was presented with memberships in the Society. RADM Thomas T. Matteson thanked Mr. Scheuing for these memberships, given by Dick in honor of hi s friend Captain Frank T. Hayden. Capt. Hayden served under Mr. Scheuing aboard the Liberty ship William N. Pendleton at Utah Beach on DDay in 1944. Capt. Hayden was then a Kings Point Midshipman , and as the years passed Mr. Scheuing did not forget this young man&#39; s stalwart bearing, readiness to learn and effective execution of orders in a life-and-death situation.

Peking Battles Cape Horn Again-in New Edition of Johnson Classic The Peking Battles Cape Horn, Irving Johnson &#39;s account of a Cape Horn passage in the German bark Peking in 192930, is going back into print, augmented with a new preface by Electa (Exy) Johnson , Irving&#39;s wife and partner in his later round-the-world voyages in two Yankees . The new edition carries an account of Johnson &#39;s life, as well as the now famous &quot;Afterword&quot; in which Captain Johnson reflected on the lessons of hi s seafaring in the &quot;great big wagon,&quot; as he called the four-masted Peking, and hi s appreciation of the strong seamanly qualities of Captain Jurs. With production costs covered by the NMHS Plankowners &#39; Club, the book is expected to make a profit, which will go into a special Irving and Exy Johnson fund , to help more young people get to sea in sail. Plankowners, NMHS supporters who donate $2500 or more per year, sponsor special projects that would not otherwise be feasible for NMHS to undertake.