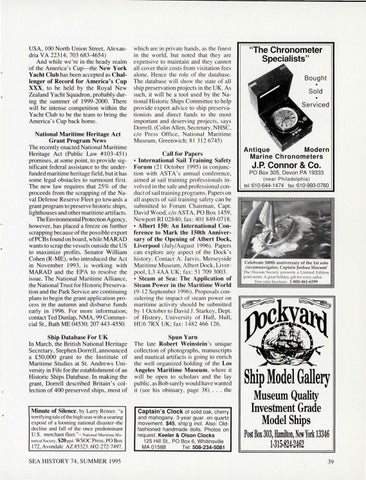 USA, 100 North Union Street, A lexan dria VA 22314; 703 683-4654) And while we &#39; re in the heady realm of the America &#39;s Cup--the New York Yacht Club has been accepted as Challenger of Record for America &#39; s Cup XXX, to be held by the Royal New Zealand Yacht Squadron , probably during the summer of 1999-2000. There will be intense competition within the Yacht Club to be the team to bring the America&#39;s Cup back home. National Maritime Heritage Act Grant Program News The recently enacted National Maritime Heritage Act (Public Law #103-451) promises, at some point, to provide significant federal assistance to the underfunded maritime heritage fie ld , but it has some legal obstacles to surmount first. The new law requires that 25% of the proceeds from the scrapping of the Naval Defense Reserve Fleet go towards a grant program to preserve historic ships, lighthouses and other maritime artifacts. The Environmental Protection Agency, however, has placed a freeze on further scrapping because of the possible export of PCB s found on board , while MARAD wants to scrap the vessels outside the US to maximize profits. Senator William Cohen (R-ME), who introduced the Act in November 1993 , is working with MARAD and the EPA to resolve the issue. The National Maritime A lliance, the National Trust for Hi storic Preservation and the Park Service are continuing plans to begin the grant application process in the autumn and di sburse funds early in 1996. For more info rmation, contact Ted Dunlap, NMA, 99 Commercial St., Bath ME 04530; 207 443-4550.

whi ch are in pri vate hands, as the fin est in the world , but noted that they are expensive to maintain and they cannot all cover the ir costs from visitati on fees alone. Hence the role of the database. The database will sho w the state of all ship preservation projects in the UK. As such, it will be a tool used by the Nati ona l Historic Ships Committee to help provide ex pert advice to ship preservationi sts and direct fund s to the most important and deserving projects, says Dorrell. (Colin Allen, Sec retary, NHSC, c/o Press Offi ce, Natio na l Maritime Museum , Greenwich; 8 1 3 12 6745) Call for Papers • International Sail Training Safety Forum (2 1 October 1995) in conjunction with ASTA &#39;s annua l confe rence, aimed at sa il training profess ionals in vo lved in the safe and professional con duct of sail training programs. Papers on all as pects of sail tra ining safety can be submitted to Forum Chairman, Capt. Dav id Wood, c/o ASTA , PO Box 1459, New port RI 02840; fa x: 401 849-071 8. • Albert 150: An International Conference to Mark the lSOth Anniversary of the Opening of Albert Dock, Liverpool (J ul y/A ugust 1996). Papers can explore any aspect of the Dock &#39;s hi story. Contact A. Jarvis, Merseyside Maritime Muse um , Albert Dock, Liverpool, L3 4A A UK; fax: 5 1 709 3003 . • Steam at Sea: The Application of Steam Power in the Maritime World (9- 12 September 1996). Proposa ls conside ring the impact of steam power on maritime acti vity should be submitted by 1 Octo be r to Dav id J. Starkey , Dept. of Hi story, Uni versity of Hull , Hull , HU6 7RX UK; fax : 1482 466 126.

Ship Database For UK In March, the British National Heritage Secre tary , Stephen Dorre ll , announced a £50 ,000 grant to the In stitute of Maritime Studies at St. Andre ws University in Fife for the establishment of an Historic Ships Database. In making the grant, Dorrell described Britain &#39;s col lection of 400 preserved ships, most of

Spun Yarn The late Robert Weinstein&#39; s unique co llection of photographs, manuscripts and nauti cal arti facts is going to enrich the we ll organi zed holding of the Los Angeles Maritime Museum , where it will be open to schol ars and the lay public, as Bob sure ly would have wanted it (see hi s obituary, page 38) . . . the