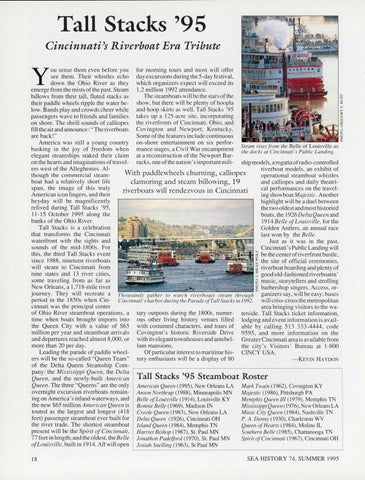 Tall Stacks &#39;95 Cincinnati)s Riverboat Era Tribute ou sense them even before you for morning tours and most will offer see them. Their whistles echo day excursions during the 5-day festival , down the Ohio River as they which organizers expect will exceed its emerge from the mists of the past. Steam 1.2 million 1992 attendance. The steamboats wi ll be the stars of the billows from their tall, fluted stacks as their paddle wheels ripple the water be- show, but there will be plenty of hoopla low . Bands play and crowds cheer while and hoop skirts as well. Tall Stacks &#39;95 passengers wave to friends and families takes up a 125-acre site, incorporating on shore. The shrill sounds of calliopes the riverfronts of Cincinnati, Ohio, and fill the air and announce:&quot; The riverboats Covington and Newport, Kentucky. Some of the features include continuous are back! &quot; America was still a young country on-shore entertainment on six perforSteam rises from the Belle of Louisville as basking in the joy of freedom when mance stages, a Civil War encampment she docks at Cincinnari&#39; s Public Landing. elegant steamships staked their claim at a reconstruction of the Newport Baron the hearts and imaginations of travel- racks, one of the nation&#39;s importantmili- ship models, a regatta of rad io-controlled ers west of the Alleghenies. Alriverboat model s, an exhibit of With paddlewheels churning, calliopes though the commercial steamoperational steamboat whistles boat had a relatively short life and calliopes and daily theatriclamoring and steam billowing, 19 span, the image of this truly cal performances on the travelriverboats will rendezvous in Cincinnati American icon lingers , and their ing showboat Majestic. Another heyday will be magnificently highlight will be a duel between relived during Tall Stacks &#39;95, the two oldest and most historied 11-15 October 1995 along the boats, the 1926 Delta Queen and banks of the Ohio River. 1914 Belle of Louisville , for the Tall Stacks is a celebration Golden Antlers, an annual race that transforms the Cincinnati last won by the Belle. waterfront with the sights and Just as it was in the past, sounds of the mid- l 800s. For u. Cincinnati&#39;s Public Landing will this, the third Tall Stacks event 5 be the center of riverfront bustle, since 1988, nineteen riverboats ~ the site of official ceremonies, will steam to Cincinnati from ::3 riverboat boarding and plenty of ~ nine states and 13 river cities, -&#39; good old-fashioned riverboatin&#39; some traveling from as far as ~ music, storytellers and strolling New Orleans, a 1,718-mile river ~ barbershop singers. Access, orjourney. They will recreate a Thousands gather to watch riverboars steam through ganizers say, will be easy; buses period in the 1850s when Cin- Cincinnati&#39;s harbor during the Parade ofTall Stacks in 1992. will criss-cross the metropolitan cinnati was the principal center area bringing visitors to the waof Ohio River steamboat operations, a tary outposts during the 1800s, numer- terside. Tall Stacks ticket information , time when boats brought imports into ous other living history venues filled lodging and event information is availthe Queen City with a value of $65 with costumed characters, and tours of able by calling 513 333-4444, code million per year and steamboat arrivals Covington &#39; s historic Riverside Drive 9595, and more information on the and departures reached almost 8,000, or with its elegant townhouses and antebel- Greater Cincinnati area is available from more than 20 per day. lum mansions. the city&#39;s Visitors &#39; Bureau at 1-800 Of particular interest to maritime his- CINCYUSA. Leading the parade of paddle wheelers will be the so-called &quot;Queen Team&quot; tory enthusiasts will be a display of 80 -KEVIN HA YOON of the Delta Queen Steamship Company: the Mississippi Queen, the D elta Queen, and the newly-built American Tall Stacks &#39;95 Steamboat Roster Queen. The three &quot;Queens&quot; are the only American Queen (1995), New Orleans LA Mark Twain (1962), Covington KY overnight excursion riverboats remain- Anson Northrup (1988), Minneapolis MN Majestic (1986) , Pittsburgh PA ing on America &#39;s inland waterways, and Belle of Louisville ( 1914), Louisville KY Memphis Queen Ill (1979) , Memphis TN the new $65 million American Queen is Bonnie Belle (1969) , Madison IN Mississippi Queen ( 1976), New Orleans LA touted as the largest and longest (418 Creole Queen (1983), New Orleans LA Music City Queen (1984), Nashville TN feet) passenger steamboat ever built for Delta Queen (1926), Cincinnati OH P.A. Denny (1930), Charleston WV the river trade. The shortest steamboat Island Queen (1984), Memphis TN Queen of Hearts (1984), Moline IL present will be the Spirit of Cincinnati, Harriet Bishop (1987), St. Paul MN Southern Belle ( 1985), Chattanooga TN 77 feet in length; and the oldest, the Belle Jonathon Padelford (1970), St. Paul MN Spirit of Cincinnati (1967), Cincinnati OH ofLouisville, built in 1914. Al l will open Josiah Snelling (1963), St Paul MN