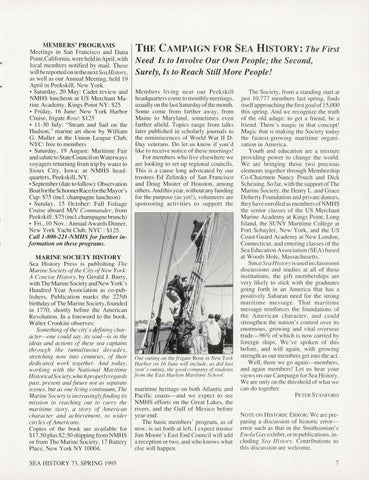 THE CAMPAIGN FOR SEA HISTORY: The First Need Is to Involve Our Own People; the Second, Surely, Is to Reach Still More People! Members livin g near our Peekskill headquarters come to monthly meetings, usually on the last Saturday of the month. Some come from farther away, from Maine to Maryland, sometimes even farther afield. Topics range from talks later published in scho larly journals to the remini scences of World War II DDay veterans. Do let us know if you&#39;d like to receive notice of these meetings! For members who live elsewhere we are looking to set up regional councils. This is a cause long advocated by our trustees Ed Zelinsky of San Francisco and Doug Mu ster of Houston, among others. And this year, without any funding for the purpose (as yet!) , volunteers are spon sorin g activities to support the

Call 1-800-221-NMHS for further information on these programs.

MARINE SOCIETY HISTORY Sea History Press is publishing The Marin e Society of the City of New York: A Concise History, by Gerald J. Barry, with The Marine Society and New York &#39;s Hundred Year Association as co-publi shers. Publication marks the 225th birthday of The Marine Society, founded in 1770, shortly before the American Revolution. In a foreword to the book, Walter Cronkite observes: Something of the city&#39;s defining character--one could say, its soul--is in the ideas and actions of these sea captains through the tumultuous decades, stretching now into centuries, of their dedicated work together. And today , working with the National Maritime Historical Society, which properly regards past, present and future not as separate scenes, hut as one living continuum , The Marine Society is increasingly finding its mission in reaching out to carry the maritime story, a story of American character and achievement, to wider circles of Americans. Copies of the book are available for $17 .50 plus $2.50 shipping from NMHS or from The Marine Society, 17 Battery Place, New York NY I 0004. SEA HISTORY 73 , SPRING 1995

Our outing on the frigate Rose in New York Harbor on 16 Jun e will include, as did last year&#39;s outing, the good company of students from the East Harlem Maritime School.

maritime heritage on both Atlantic and Pacific coasts-and we expect to see NMHS efforts on the Great Lakes, the rivers, and the Gulf of Mexico before year-end. The basic members&#39; program , as of now, is set forth at left. I expect trustee Jim Moore&#39;s East End Council will add a reception or two, and who knows what e lse will happen.

The Society, from a standing start at just I 0,777 members last spring, finds itself approaching the first goal of 15,000 this spring. And we recognize the truth of the old adage: to get a friend , be a friend . There &#39;s magic in that concept! Magic that is making the Society today the fastest-growing maritime organization in America. Youth and education are a mixture providing power to change the world. We are bringing those two precious elements together through Membership Co-Chairmen Nancy Pouch and Dick Scheuing. So far, with the support of The Marine Society, the Henry L. and Grace Doherty Foundation and private donors, they have enrolled as members ofNMHS the senior classes of the US Merchant Marine Academy at Kings Point, Long Island, the SUNY Maritime College at Fort Schuyler, New York, and the US Coast Guard Academy at New London , Connectic ut, and entering classes of the Sea Education Association (SEA) based at Woods Hole, Massachusetts. Since Sea History is used in classroom discussions and studies at all of these institutions, the gift memberships are very likely to stick with the graduates going forth in an America that has a positively Saharan need for the strong maritime message . That maritime message reinforces the foundations of the American character, and could strengthen the nation&#39;s control over its enormous, growing and vital overseas trade-96% of which is now carried by foreign sh ips. We &#39;ve spoken of this before, and will again , with growing strength as our members get into the act. Well , there we go again-members , and again members! Let us hear your views on our Campaign for Sea History. We are only on the threshold of what we can do together. PETER STANFORD

NOTE ON HISTORIC ERROR: We are preparing a discussion of historic errorerror such as that in the Smithsonian&#39;s Enola Gay exhibit, or in publications, including Sea History. Contributions to this discussion are welcome.