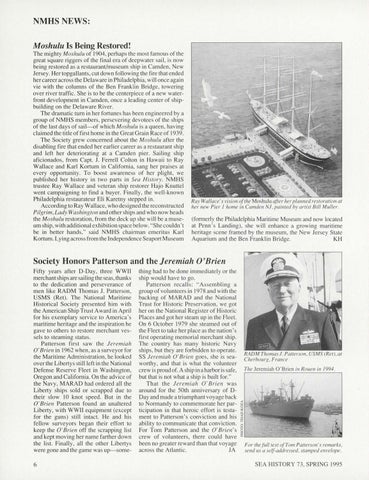 NMHSNEWS: Moshulu Is Being Restored! The mighty M oshulu of 1904, perhaps the most famous of the great square riggers of the final era of deepwater sai l, is now being restored as a restaurant/museum ship in Camden, New Jersey. Her topgallants , cut down following the fire that ended her career across the Delaware in Philadelphia, will once again vie with the columns of the Ben Franklin Bridge, towering over river traffic . She is to be the centerpiece of a new waterfront development in Camden, once a leading center of shipbuilding on the Delaware River. The dramatic tum in her fortunes has been engi neered by a group of NMHS members , persevering devotees of the ships of the last days of sail-of which Moshulu is a queen, having claimed the title of first home in the Great Grain Race of 1939. The Society grew concerned about the Moshulu after the disabling fire that ended her earlier career as a restaurant ship and left her deteriorating at a Camden pier. Sailing ship aficionados, from Capt. J. Ferrell Colton in Hawaii to Ray Wallace and Karl Kortum in California, sang her praises at every opportunity. To boost awareness of her plight, we published her history in two parts in Sea History . NMHS trustee Ray Wallace and veteran ship restorer Hajo Knuttel went campaigning to find a buyer. Finally, the well-known Phi ladelphia restaurateur Eli Karetny stepped in. According to Ray Wallace, who designed the reconstructed Pilgrim, Lady Washington and other ships and who now heads the Moshulu restoration, from the deck up she will be a museum ship, with additional exhibition space below. &quot;Shecouldn &#39;t be in better hands,&quot; said NMHS chairman emeritus Karl Kortum. Lying across from the Independence Seaport Museum

(formerly the Philadelphia Maritime Museum and now located at Penn&#39;s Landing), she will enhance a growing maritime heritage scene framed by the museum , the New Jersey State Aquarium and the Ben Franklin Bridge. KH

Society Honors Patterson and the Jeremiah O&#39;Brien Fifty years after D-Day , three WWII merchant ships are sai 1ing the seas, thanks to the dedication and perseverance of men like RADM Thomas J. Patterson, USMS (Ret). The National Maritime Historical Society presented him with the American Ship Trust Award in April for his exemplary service to America&#39;s maritime heritage and the inspiration he gave to others to restore merchant vessels to steaming status. Patterson first saw the Jeremiah O&#39;Brien in 1962 when, as a surveyor for the Maritime Administration, he looked over the Libertys still left in the National Defense Reserve Fleet in Washington, Oregon and California. On the advice of the Navy, MARAD had ordered all the Liberty ships sold or scrapped due to their slow 10 knot speed. But in the O&#39;Brien Patterson found an unaltered Liberty, with WWII equipment (except for the guns) still intact. He and his fellow surveyors began their effort to keep the O&#39;Brien off the scrapping list and kept moving her name farther down the list. Finally, all the other Libertys were gone and the game was up-some6

thing had to be done immediately or the ship would have to go. Patterson recalls : &quot;Assembling a group of volunteers in 1978 and with the backing of MARAD and the National Trust for Historic Preservation, we got her on the National Register of Historic Places and got her steam up in the Fleet. On 6 October 1979 she steamed out of the Fleet to take her place as the nation&#39;s first operating memorial merchant ship. The country has many historic Navy ships, but they are forbidden to operate. SS Jeremiah O&#39;Brien goes, she is seaworthy, and that is what the volunteer crew is proud of. A ship in a harbor is safe, but that is not what a ship is built for.&quot; That the Jeremiah O &#39; Brien was around for the 50th anniversary of DDay and made a triumphant voyage back to Normandy to commemorate her participation in that heroic effort is testament to Patterson&#39;s conviction and his ability to communicate that conviction. For Tom Patterson and the O&#39;Brien&#39;s crew of volunteers, there could have been no greater reward than that voyage across the Atlantic. JA