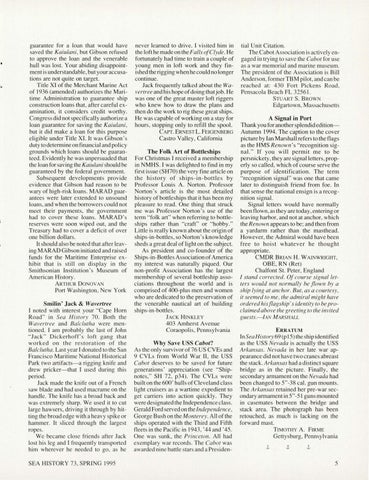 guarantee for a loan that would have saved the Kaiulani, but Gibson refused to approve the loan and the venerable hull was lost. Your abiding disappointment is understandable, but your accusations are not quite on target. Title XI of the Merchant Marine Act of 1936 (amended) authorizes the Maritime Administration to guarantee ship construction loans that, after careful examination, it considers credit worthy. Congress did not specifically authorize a loan guarantee for savi ng the Kaiulani , but it did make a loan for thi s purpose eligible under Title XI. It was Gibson&#39;s duty to determine on financial and poli cy grounds which loans should be g uaranteed . Evidently he was unpersuaded that the loan for saving the Kaiulani should be g uaranteed by the federal governme nt. Subsequent developme nts provide evidence that Gibson had reason to be wary of high-ri sk loans. MARAD g uarantees were later extended to un sound loans, and when the borrowers could not meet their payments , the government had to cover these loan s. MARAD&#39;s reserves were soon wiped out, and the Treasury had to cover a deficit of over one billion dollars. It should also be noted that after leaving MARAD Gibson initiated and raised funds for the Maritime Enterprise exhibit that is still on display in the Smithsonian Institution &#39;s Museum of American Hi story. ARTHUR DONOVAN Port Washington, New York

Smilin&#39; Jack &amp; Wavertree I noted with interest your &quot;Cape Horn Road&quot; in Sea History 70. Both the Wavertree and Balclutha were mentioned . I am probably the last of John &quot; Jack&quot; Dickerhoff&#39;s loft gang that worked on the restoration of the Balclutha. Last year I donated to the San Francisco Maritime National Historical Park two artifacts-a rigging knife and drew pricker-that I used during thi s period . Jack made the knife out of a French saw blade and had used macrame on the handl e. The knife has a broad back and was extremely sharp. We used it to c ut large hawsers, driving it through by hitting the broad edge with a heavy spike or hammer. It sliced through the largest ropes. We became close friends after Jack lost hi s leg and I frequently transported him wherever he needed to go, as he SEA HISTORY 73, SPRING 1995

never learned to drive . I visited him in the loft he made on theFallsofClyde. He fortunately had time to train a couple of young men in loft work and they finished the rigging when he could no longer continue. Jack frequently talked about the Wavertree and hi s hope of doing that job. He was one of the great master loft riggers who knew how to draw the plans and then do the work to rig these great ships. He was capable of working on a stay for hours, stopping only to refill the spool. CAPT. ERNESTL. FEIGENBERG Castro Valley, California

The Folk Art of Bottleships For Christmas I received a membership in NMHS. I was delighted to find in my first issue (S H70) the very fine article on the hi s tory of s hip s- in-bottles by Professor Loui s A. Norton. Professor Norton&#39;s article is the most detailed history ofbottleships that it has been my pleasure to read . One thing that struck me was Professor Norton&#39; s use of the term &quot; folk art&quot; when referring to bottleships rather than &quot;craft&quot; or &quot; hobby .&quot; Little is really known about the origin of ships- in-bottles , so Norton&#39;s knowledge sheds a great deal of light on the subject. As president and co-founder of the Ships-in-Bottles Association of America my interest was naturally piqued. Our non-profit Association has the largest membership of several bottleship associations throughout the world and is comprised of 400-plus men and women who are dedicated to the preservation of the venerable nautical art of building ships-in-bottles. ]ACK HINKLEY 403 Amherst A venue Coraopolis, Pennsy lvania Why Save USS Cabot? As the only survivorof76 US CYEs and 9 CYLs from World War II, the USS Cabot deserves to be saved for future generations &#39; appreciation (see &quot; Shipnotes,&quot; SH 72, p34) . The CYLs were built on the 600 &#39; hulls of Cleveland class light cruisers as a wartime expedient to get carriers into action quickly. They were designated the Independence class. Gerald Ford served on the Independence, George Bush on the Monterey. All of the ships operated with the Third and Fifth fleets in the Pacific in 1943, &#39;44 and &#39;45. One was sunk, the Princeton. All had exemplary war records. The Cabot was awarded nine battle stars and a Presiden-

tial Unit Citation. The Cabot Association is actively engaged in trying to save the Cabot for use as a war memorial and marine muse um. The president of the Association is Bill Anderson, former TBM pilot, and can be reached at: 430 Fort Pickens Road , Pensacol a Beach FL 32561. STUARTS. BROWN Edgartown, Massachusetts

A Signal in Port Thank you for another splendid editionAutumn 1994. The caption to the cover picture by Ian Marshall refers to the flags as the HMS Renown&#39;s &quot;recognition signal.&quot; If you wi II permit me to be persnickety, they are signal letters, properly so called, which of course serve the purpose of identification. The term &quot; recognition s ignal &quot; was one that came later to di stinguish friend from foe. In that sense the national ensign is a recognition s ignal. Signal letters would have normally been flown , as they are today , entering or leaving harbor, and not at anchor, which the Renown appears to be; and then from a yardarm rather than the masthead . However, the Admiral would have been free to hoi s t whatever he thought appropriate. CMDR BRIAN H. WAINWRIGHT, OBE, RN (Ret) Chalfont St. Peter, England

I stand corrected. Of course signal letters would not normally be flown by a ship lying at anchor. But, as a courtesy, it seemed to me, the admiral might have ordered hisflagship&#39; s identity to be proclaimed above the greeting to the invited guests .-IAN MARSHALL ERRATUM In Sea History69( p15) the ship identified as the USS Nevada is actually the USS Arkansas. Nevada in her late war appearance did not have two cranes abreast the stack . Arkansas had a distinct square bridge as in the picture. Finally, the secondary armament on the Nevada had been changed to 5&quot;-38 cal. gun mounts . The Arkansas retained her pre-war secondary armament in 5&quot;-51 guns mounted in casemates between the bridge and stack area. The photograph has been retouched, as much is lacking on the forward mast. TIMOTHY A. FIRME Gettysburg, Pennsy lvania