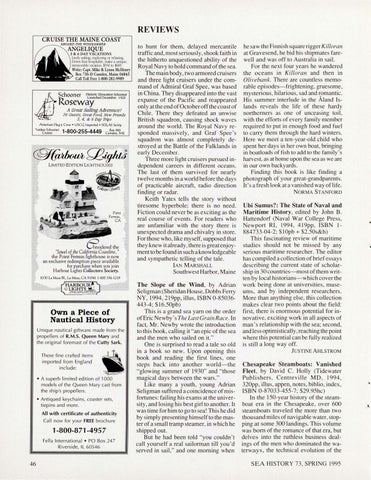 REVIEWS CRUISE THE MAINE COAST ABOARD THE IVINDJAM MER

to hunt for them, delayed mercantile traffic and, most seriously, shook fa ith in the hitherto unquestioned ability of the Royal Navy to hold command of the sea. The main body , two armored cruisers and three light crui sers under the command of Admiral Graf Spee, was based in China. They di sappeared into the vast expanse of the Pacific and reappeared only at the end of October off the coast of Chile. There they defeated an un wise British squadro n, causing shock waves around the wo rld . The Royal Navy responded massively, and G raf Spee &#39; s squadron was almost complete ly destroyed at the Battl e of the Falklands in earl y December. Three more light crui ser pursued independent careers in different oceans. The last of them survived fo r nearl y twel ve months in a wo rld before the days of practicable aircraft, radio direction findin g or radar. Keith Yates te ll s the story without tiresome hyperbole; there is no need. Fiction could never be as exc iting as the real course of events. For readers who are unfamiliar with the story there is unexpected drama and chivalry in store . For those who, like myself, supposed that they knew it already, there is great enjoyment to be found in such a knowledgeable and sympathetic te lling of the tale. IAN M ARSHALL

Own a Piece of Nautical History Un iq ue nautica l giftware made from the propellers of R.M.S. Queen Mary an d the ori ginal foremast of th e Cutty Sark.

• A superb limited editi on of 1000 models of th e Queen M ary cast from the ship&#39;s propellers. • Anti qued keyc hains, coaster sets, ti epins and more. All with certificate of authenticity Ca ll now for your FREE brochure

The Slope of the Wind , by Adrian Seligman (Sheridan House, Dobbs Ferry NY, 1994, 2 19pp, illus, ISBN 0-85036443-4; $ 16.50pb) Thi s is a grand sea yarn on the order of Eric Newby &#39;s Th e Last Grain Race. In fact, Mr. Newby wrote the introduction to thi s book , calling it &quot; an epic of the sea and the men who sail ed on it. &quot; One is surpri sed to read a tale so old in a book so new. Upon opening thi s book and reading the first lines, one steps bac k into another wo rld- the &quot;glowing summer of 1930&quot; and &quot;those magical days between the wars.&quot; Like many a youth , young Adrian Seli gman suffered a co incidence of misfortunes: failing hi s exams at the uni versity, and losing hi s best girl to another. It was time for him to go to sea! This he did by simply presenting himself to the master of a small tramp steamer, in which he shipped out. But he had been told &quot;you couldn &#39; t call yourself a real sailorman till you &#39; d served in sail ,&quot; and one morning when

he saw the Finnish square rigger Killoran at Gravesend , he bid hi s shipmates farewell and was off to Australi a in sail. For the next fo ur years he wandered the o ceans in Killoran and the n in Olivebank. There are countless memorable e pi sodes-fri ghtening, gruesome, myste rious, hilarious, sad and romantic. Hi s summer interlude in the Aland Islands reveals the life of these hardy northe rners as one of unceasing to il , with the efforts of every fa mil y member required to put in enough food and fu el to carry them th ro ugh the hard winters. Here we meet a ten-year-old child who spent he r days in her own boat, bringing in boatloads of fi sh to add to the family&#39;s harvest, as at home upon the sea as we are in our own backyards. Finding thi s book is like fi nding a photograph of your great-grandparents. It &#39;s a fresh look at a vanished way ofli fe. NORMA STA FORD

Ubi Su mus? : The State of Naval and Maritime History , edited by John B . Hattendorf (Naval War College Press, Ne wport RI , 1994, 41 9pp, ISBN 1884733-04-2; $ 10pb + $2.50s&amp;h) Thi s fascinating rev iew of maritime studies should not be missed by any seri ous maritime researcher. The editor has compiled a collecti on of brief essays describing the current state of scholarship in 30coun tries-most of them wri tten by local hi stori ans-which cover the work be ing done at uni versities, museums, and by independent researchers. More than anything else, thi s collecti on makes clear two points about the fi eld: first, the re is enormous potential fo r in novative, exciting work in all aspects of man &#39;s re lati onship with the sea; second , and less optimistically, reaching the point where thi s potenti al can be full y realized is still a long way off. J USTINE AHLSTROM

Chesapeake Steamboats: Vanished Fleet, by David C. Holl y (Tidewater Publi s he rs, Ce ntrev ill e MD , 1994 , 320pp, illus, appen, notes, biblio, index, ISBN 0 -87033-455-7; $29.95hc) In the 150-year history of the steamboat era in the Chesapeake, over 600 steamboats traveled the more than two thousand miles of nav igable water, stopping a t some 300 landings . Thi s volume was bo rn of the romance of that era, but delves into the ruthless business dealings of the men who dominated the waterways, the technical evolution of the SEA HI STORY 73 , SPRING 1995