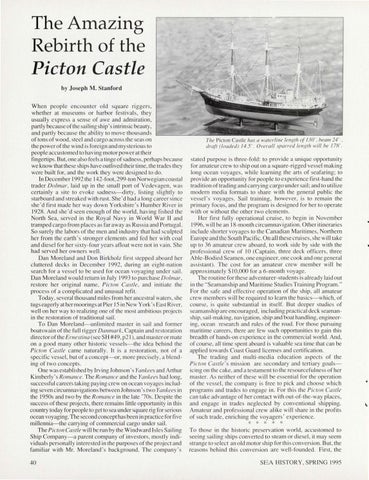 The Alllazing Rebirth of the Picton Castle by Joseph M. Stanford When peop le enco unter o ld square ri ggers, whether at museums or harbor festival s, they usuall y ex press a sense of awe and admirati on, partly because of the sailing ship &#39;s intrinsic beauty, and partl y because the ability to move thou sands of tons of wood , steel and cargo across the seas on the powerof the wind is foreign and mysteriou s to people accustomed to hav ing motor power at their fingertips. But, one also feels a tinge of sadness, perhaps because we know that these ships have outlived the ir time, the trades they were buil t for, and the work they were designed to do. In December 1992 the 142-foot, 299-ton Norwegian coastal trader Do /mar, laid up in the small port of Yedevagen , was certain ly a site to evoke sadness--dirty , li sting sli ghtl y to starboard and streaked with rust. She &#39;d had a long career si nce she &#39;d first made her way down York shire&#39;s Humber River in 1928. And she&#39; d seen enough of the world , having fished the Nort h Sea, served in the Royal Navy in World War II and tramped cargo from places as far away as Russ ia and Portuga l. So sure ly the labors of the men and industry that had sc ulpted her from the earth &#39;s stronger e lements and fed her with coa l and diese l for her six ty-fo ur years afloat we re not in vain. S he had served her owners well. Dan More land and Don Birkhol z first stepped aboard her cluttered decks in December 1992, during an e ight-natio n search for a vessel to be used for ocean voyaging under sa il. Dan More land would return in July 1993 to purchase Do/mar, restore her original name, Picton Castle, and initiate the process of a complicated and unusual re fit. Today, several thousand miles from her ancestral waters, she tugs eagerly at her moorings at Pier 15 in New York &#39;s East River, well on her way to realizing one of the most ambitious projects in the restoration of trad itional sail. To Dan More land- unlimited master in sa il and forme r boatswa in of the full rigger Da11mar/.: , Capta in and restoration directoroftheErn estina (see SH #49 , p2 l ), and mas terormate on a good many other hi storic vessels- the idea behind the Picton Castle came naturall y. It is a restoration , not of a specific vessel , but of a concept--or, more precisely, a blending of two concepts. One was establi shed by lrvingJohnson &#39;s Ya11kees and Art hur Kimberly &#39;s Romance. The Romance and the Yankees had long, successful careers taking paying crew on ocean voyages including seven circumnav igations between Johnson &#39;s two Yankees in the 1950s and two by the Romance in the late &#39;70s. Despite the success of these projects, there remains little opportunity in this country today for people to get to sea under square rig for serious ocean voyaging. The second concept has been in practice for five millennia-the carrying of commercial cargo under sail. The Picton Castle will be run by the Wind ward Isles Sailing Ship Company-a parent company of investors, mostly indi vidua ls personall y interested in the purposes of the project and familiar with Mr. More land &#39;s background. The company&#39;s 40

stated purpose is three-fold: to provide a unique opportunity for amateur crew to ship out on a square-rigged vesse l maki ng long ocean voyages, whi le learning the arts of seafaring; to provide an opportunity for people to experience first-hand the traditi on of trading and carry ing cargo under sail ; and to utili ze modern med ia fom1ats to share with the genera l public the vessel&#39;s voyages. Sail training, ho wever, is to remain the primary foc us, and the program is des igned for her to operate with or without the other two e le ments. Her first fully operat ional cruise, to begin in November 1996, wi ll be an 18-month c irc umnav igation . Other itineraries include shorter voyages to the Canadian Mari times, Northern Europe and the South Pacific. On a ll these crui e , she will take up to 36 amateur crew aboa rd , to work side by side with the profess ional crew of I 0 (Captain , three deck officers, three Able-Bodied Seamen, one engi neer, one cook and one general assistant). The cost for an amateur crew member will be approximately $ I 0,000 for a 6-month voyage. T he routine fort hese adven turer-studen ts is a lready la id out in the &quot;Seamanship and Maritime Studies Training Program. &quot; For the safe and effective operation of the ship, all amate ur crew members will be requ ired to learn the basics-which, of course, is quite substantial in itself. But deeper studies of seamanship are encouraged, including practical deck seamanship, sa il -mak ing, nav igation, ship and boat handling, engineering, ocean research and rules of the road. For those pursuing maritime careers, there are few such opportunities to gain this breadth of hands-on experience in the commerc ial world. And , of course, all time spent aboard is valuable sea time that can be applied towards Coast Guard licenses and certification. T he trading and multi-media education aspects of the Picton Castle&#39;s mission are secondary and tertiary goals icing on the cake, and a testament to the resourcefulness of her master. As neither of these wi ll be essentia l for the operation of the vessel, the company is free to pick and choose which programs and trades to engage in . For this the Picton Castle can take adva ntage of her contac t with out-of-the-way pl aces, and engage in trades neglected by conventional shipping. Amateur and professional crew a like will share in the profits of such trade, enriching the voyage rs&#39; experience.

To those in the hi storic preservation wo rld , acc ustomed to seei ng sa iling ships converted to s team or diesel , it may seem strange to select an old motor sh ip for thi s conversion. But, the reasons behind this convers ion are well -founded. First, the SEA HISTORY , SPRING 1995