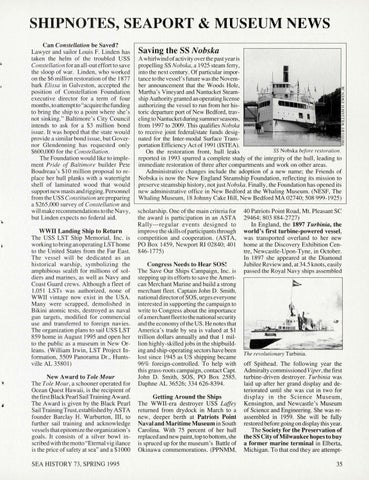 Can Constellation be Saved? Lawyer and sailor Louis F. Linden has taken the helm of the troubled USS Constellation for an all -out effort to save the sloop of war. Linden , who worked on the $6 million restoration of the 1877 bark Elissa in Galveston, accepted the position of Conste ll ation Foundation executive director for a term of four months, to attempt to &quot;acquire the funding to bring the ship to a point where she&#39;s not sinking.&quot; Baltimore &#39;s City Council intends to ask for a $3 million bond issue. It was hoped that the state would provide a similar bond issue, but Governor Glendenning has requested only $600,000 for the Constellation. The Foundation would like to implement Pride of Baltimore builder Pete Boudreau &#39;s $10 million proposal to replace her hull planks with a watertight shell of laminated wood that would support new masts and rigging. Personnel from the USS Constitution are preparing a $265,000 survey of Constellation and will make recommendations to the Navy, but Linden expects no federal aid . WWII Landing Ship to Return The USS LST Ship Memorial, Inc. is working to bring an operating LST home to the United States from the Far East. The vessel will be dedicated as an historical warship, symbolizi ng the amphibious sealift for millions of soldiers and marines, as well as Navy and Coast Guard crews. Although a fleet of l ,05 I LSTs was authorized, none of WWII vintage now exist in the USA. Many were scrapped, demolished in Bikini atomic tests, destroyed as naval gun targets, modified for commercial use and transferred to foreign nav ies. The organization plans to sail USS LST 859 home in August 1995 and open her to the public as a museum in New Orleans. (William Irwin, LST Project Information, 5509 Panorama Dr., Huntsville AL 35801) New Award to Tole Mour The Tole Mour, a schooner operated for Ocean Quest Hawaii, is the recipient of the first Black Pearl Sail Training A ward. The Award is given by the Black Pearl Sail Training Trust, established by ASTA founder Barclay H. Warburton , III, to further sai l training and acknowledge vessels that epitomize the organization&#39;s goals. It consists of a silver bowl inscribed with the motto &quot;Eternal vigilance is the price of safety at sea&quot; and a $1000 SEA HISTORY 73, SPRING 1995

Saving the SS N obska A whirl wind of activity over the past year is propelling SS N obska, a 1925 steam ferry , into the next century. Of particular importance to the vessel &#39;s future was the November announcement that the Woods Hole, Martha&#39;s Vineyard and Nantucket Steamship Authority granted an operating license authorizing the vessel to run from her historic departure port of New Bedford, traveling to Nantucket during summer seasons, from 1997 to 2009. This qualifies Nobska to receive joint federal/state funds designated for the Inter-modal Surface Transportation Efficiency Act of 1991 (ISTEA). On the restoration front, hull leaks SS Nobska before restoration. reported in 1993 spurred a complete study of the integrity of the hull , leading to immediate restoration of three after compartments and work on other areas. Administrative changes include the adoption of a new name; the Friends of Nobska is now the New England Steamship Foundation, reflecting its mission to preserve steamship history , notjustNobska. Finally, the Foundation has opened its new administrative office in New Bedford at the Whaling Museum. (NESF, The Whaling Museum, 18 Johnny Cake Hill , New Bedford MA 02740; 508 999-1925) scholarship. One of the main criteria for the award is participation in an AST A Rally-regular events designed to improve the skill s of participants through competition and cooperation. (ASTA, PO Box 1459, Newport RI 02840; 401 846-1775) Congress Needs to Hear SOS! The Save Our Ships Campaign, Inc. is stepping up its efforts to save the American Merchant Marine and build a strong merchant fleet. Captain John D. Smith, national director of SOS, urges everyone interested in supporting the campaign to write to Congress about the importance of a merchant fleet to the national security and the economy of the US. He notes that America&#39;s trade by sea is valued at $1 trillion dollars annually and that 1 million highly-skilled jobs in the shipbuilding and ship-operating sectors have been lost si nce 1945 as US shipping became 96% foreign-controlled. To help with this grass-roots campaign, contact Capt. John D. Smith, SOS, PO Box 2585, Daphne AL 36526; 334 626-8394. Getting Around the Ships The WWII-era destroyer USS Laffey returned from drydock in March to a new, deeper berth at Patriots Point Naval and Maritime Museum in South Carolina. With 75 percent of her hull replaced and new paint, top to bottom, she is spruced up for the museum&#39;s Battle of Okinawa commemorations. (PPNMM,

40 Patriots Point Road , Mt. Pleasant SC 29464; 803 884-2727) In England, the 1897 Turbinia, the world&#39;s first turbine-powered vessel, was transported overland to her new home at the Discovery Exhibition Centre, Newcastle-Upon-Tyne, in October. In 1897 she appeared at the Diamond Jubilee Review and, at 34.5 knots , easily passed the Royal Navy ships assembled

off Spithead. The following year the Admiralty commissioned Viper, the first turbine-driven destroyer. Turbinia was laid up after her grand display and deteriorated until she was cut in two for display in the Science Museum, Kensington, and Newcastle&#39;s Museum of Science and Engineering. She was reassembled in 1959. She will be fully restored before going on display this year. The Society for the Preservation of the SS City of Milwaukee hopes to buy a former marine terminal in Elberta, Michigan. To that end they are attempt35