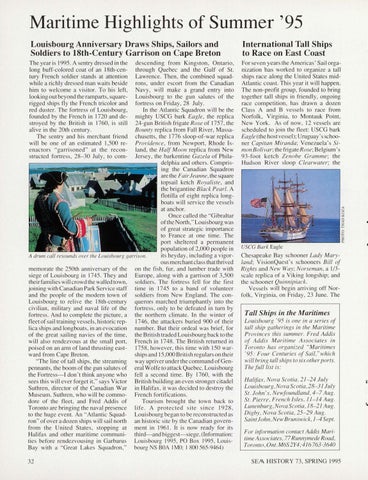 The year is 1995. A sentry dressed in the long buff-colored coat of an I 8th -century French so ldier stands at attention while a ri chl y dressed man wa its beside him to welcome a visitor. To hi s le ft , looking out beyond the ramparts, squareri gged ships fl y the French tricolor and red duster. The fo rtress of Loui sbourg, found ed by the French in 1720 and destro yed by the British in 1760, is still alive in the 20th century. The sentry and hi s merchant fri end will be one of an estimated 1,5 00 reenac to rs "ga rri soned" at th e reco nstructed fo rtress, 28-30 Jul y, to com-

descending fro m K ingston, Ontario , th ro ugh Quebec and the Gulf of St. Law rence. Then, the combined squadrons, under escort from the Canadi an Navy, will make a grand entry into Loui sbourg to the gun salutes of the fo rtress on Friday, 28 Jul y. In the Atl antic Squadron will be the mighty USCG bark Eagle, the replica 24-gun British fri gate Rose of 1757, the Bounty replica from Fall Ri ver, Massachusetts, the 1776 sloop-of- war replica Providence, from Newport, Rhode Island , the Half Moon repli ca from New Jersey, the barkentine Gaze/a of Phil adelphi a and others. Compri sing the Can adian Squadron are the Fair Jeanne, the square topsail ketch Royaliste, and the brigantine Black Pearl. A flotill a of eight repli ca longboats will serv ice the vessels at anchor. Once called the " Gibraltar of the North ," Loui sbo urg was of great strateg ic importance to France at one time. T he port she ltered a perm anent popul ation of2,000 people in its heyday, including a vigorA drum call resounds Ol 'er the Louishourg garrison. ous merchant class that thri ved memorate the 250th anni versary of the on the fi sh, fur, and lumber trade with siege of Lo ui sbo urg in 1745. T hey and Europe, a long with a garri son of 3,500 their fa milies will crowd the walled town, soldi ers. The fo rtress fe ll fo r the first jo ining with Canadi an Park Service staff time in 1745 to a band of vol un teer and the peopl e of the modem town of soldiers from New Eng land. T he conLoui sbourg to re li ve the 18th -century querors marched triumphantly into the c iv ili an, military and naval life of the fortress , onl y to be defeated in tu m by fo rtress. And to compl ete the picture, a the northern cl imate. In the winter of fl eet of sail training vessels, histori c rep- 1746, the attackers buried 900 of their lica ships and longboats, in an evocation number. But the ir ordea l was bri ef, for of the great sailing nav ies of the time, the British traded Lo ui sbourg back to the will also rendezvous at the small port, French in 1748. T he British returned in 1758, however, thi s time with 150 warpoised on an arm of land thru sting eastward from Cape Breton. ships and 15,000 British regul ars on their "The line of tall ships, the streaming way upri ver unde r the command of Genpennants, the boom of the g un salutes of eral Wolfe to attac k Quebec. Lo ui sbourg the Fortress-I don ' t think an yone who fell a second time . By 1760 , with the sees thi s will ever fo rget it," says Victor British building an even stro nger citade l Suthren, director of the Canadian W ar in Halifax, it was dec ided to destroy the Mu seum . Suthren, who will be commo- French fortifi cations. dore of the fl eet, and Fred Addi s of Touri sm brought the town back to Toronto are bringing the naval presence life. A p ro tec ted s ite si nce 1928, to the huge event. An "A tl antic Squad- Loui sbourg began to be reconstructed as ro n" of over a dozen ships will sail north an hi storic site by the Canadi an govern from th e United States, stopp ing at ment in 196 1. It is now ready fo r its Ha li fax and other maritime communi - third-and biggest-siege. (Info rmation: ties before rendezvousing in Garbarus Loui sbourg 1995, PO Box 1995, Loui sBay with a "Great Lakes Squadron," bourg NS BOA I MO; I 800 565-9464) 32

9 The Cape Horn Road by Peter Stanford • 14 USS Laffey and a Place Called Okinawa by Dr. Steve Ewing • 20 Joshua Slocum: A Look Beyond the V...

9 The Cape Horn Road by Peter Stanford • 14 USS Laffey and a Place Called Okinawa by Dr. Steve Ewing • 20 Joshua Slocum: A Look Beyond the V...