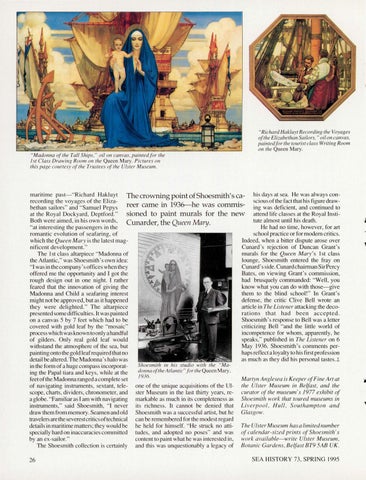 mant1me pas t-&quot;Ri chard Hak luyt The crowning point of Shoesrnith&#39; s ca- his days at sea. He was always conscious of the fac t that his figure drawrecording the voyages of the Eli zareer came in 1936--he w as commis- ing was defi cient, and continued to bethan sa ilors&quot; and &quot;Samue l Pepys sioned to paint murals for the new attend life classes at the Royal Instiat the Roya l Dockyard , Deptfo rd .&quot; tute almost until his death. Both were aimed , in hi s own words, Cunarder, the Queen Mary. He had no time, however, for art &quot;at interesting the passe ngers in the school practice or for modern critics. romanti c evo luti on of seafaring, of Indeed, when a bitter dispute arose over which the Queen Mary is the latest magC unard &#39; s rejection of Duncan Grant &#39; s nificent development. &quot; mu rals fo r the Queen Mary&#39; s I st class The Ist class altarpiece &quot; Madonna of lounge, Shoesmith entered the fray on the Atlantic,&quot; was Shoesmith &#39;s own idea: Cunard &#39;s side. Cunard chairman Sir Percy &quot; I was in the company&#39;s offices when they Bates, on viewing Grant &#39;s commission, offered me the opportunity and I got the had brusquely commanded: &quot; Well , you rough design out in one night. I rather know what you can do with those-give feared that the innovation of giving the them to the blind school! &quot; In Grant &#39;s Madonna and Child a seafaring interest defense, the critic Clive Bell wrote an might not be approved, but as it happened article in The Listener attacking the decothey we re de li ghted .&quot; The altarpi ece rati o ns th a t had bee n acce pte d. presented some difficulties. It was painted Shoesmith &#39; s response to Bell was a letter on a can vas 5 by 7 feet which had to be criticizing Bell &quot;and the little world of covered with gold leaf by the &quot; mosaic&quot; incompetence fo r whom , apparentl y, he process which was known to only a handful speaks,&quot; published in The Listener on 6 of gilders. Onl y real gold leaf would May 1936. Shoesmith &#39;s comments perwithstand the atmosphere of the sea, but haps reflect a loya lty to his first profession painting onto the gold leaf requi red that no as much as they did his personal tastes.!, Bil! . detail be altered. The Madonna &#39;s halo was Shoesmith in his studio with the &quot;Main the fo rm ofa huge compass incorporatdonna of the Atlantic&quot; f or rhe Queen Mary, ing the Papal tiara and keys, while at the 1936. Martyn Anglesea is Keeper of Fine Art at feet of the Madonna ranged a complete set of nav igating instruments, sextant, tele- one of the unique acquisitions of the Ul- the Ulster Museum in Belfast, and the scope, charts, dividers, chronometer, and ster Museum in the last thirty years, re- curator of the museum&#39; s 1977 exhibit of a globe. &quot; Familiar as I am with navigating markable as much in its completeness as Shoesmith work that toured museums in instruments,&quot; said Shoesmith , &quot; I never its richness. It cannot be denied that Li verpoo l, Hull , So uthampton and draw them from memory. Seamen and old Shoesmith was a successful arti st, but he Glasgow. travelers are the severest critics of technical can be remembered fo r the modest regard details in maritime matters; they would be he held fo r himself. &quot; He struck no atti- The U Isler Museum has a limited number spec ially hard on inaccuracies committed tudes, and adopted no poses&quot; and was of calendar-sized prints of Shoesmith&#39; s by an ex-sailor. &quot; content to paint what he was interested in, work a vailable-write Ulster Mu seum , The Shoesmith collection is certainl y and thi s was unquestionably a legacy of Botan ic Gardens, Belfast BT9 5A B UK.