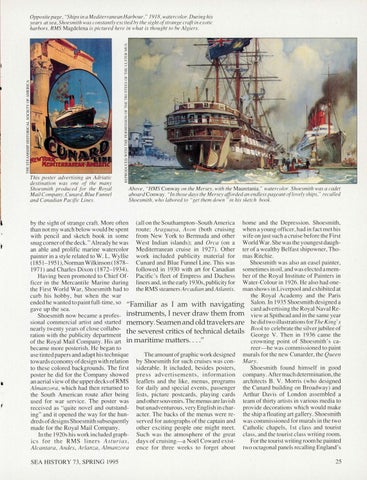 Opposite page, &quot;Ships in a Mediterranean Harbour ,&quot; 191 8, watercolor. During his years at sea , Shoesmith was constantly excited hy the sighr of strange crafr in exotic harbors. RMS Magde lena is pictured here in what is rhought to he Algiers.

Above, &quot;HMS Conway on the Mersey, with the Mauretania,&quot; warercolor. Shoesrnith was a cadet aboard Conway. &quot;Jn those days the Mersey afforded an endless pageant of lovely ships,&quot; recalled Shoesmith, who labored to &quot;get them down &quot;in his sketch hook.

by the sight of strange craft. More often (all on the Southampton-South America home and the Depress ion. Shoesmith , than not my watch be low would be spent route; Araguaya, Avon (both crui sing when a you ng officer, had in fac t met hi s with pencil and sketch book in some from New York to Bermuda and other wife on just such a crui se before the First snugcornerofthedeck. &quot; Already he was W est Indi an islands); and Orea (on a World War. She was the youngest daughan able and prolific marine watercolor M editerranean crui se in 1927). Other ter of a wealthy Belfast shipowner, Thopainter in a sty le related to W. L. Wyllie work included publicity material for mas Ritchie. Shoesmith was also an easel painter, Cunard and Blue Funnel Line. This was (1 851 - 195 1),Norman Wilkinson (18781971) and Charl es Dixon ( 1872-1934 ). followed in 1930 with art for Canadian sometimes in oil , and was elected a memHav ing been promoted to Chief Of- Pacific&#39;s fleet of Empress and Duchess ber of the Royal Institute of Painters in ficer in the Mercantile Marine during liners and , in the early 1930s, publicity for Water-Colour in 1926. He also had onethe First World W ar, Shoesmith had to the RMS steamers Arcadian and Atlantis. man show s in Liverpool and ex hibited at the Royal Academy and the Pari s cu rb hi s hobby, but when the war ended he wanted to paint full-time , so &quot;Familiar as I am with navigating Salon. In 1935 Shoesmith designed a card advertising the Royal Naval Regave up the sea. Shoesmith no w became a profes- instruments, I never draw them from view at Sp ithead and in the same year sional commerc ial artist and started memory. Seamen and old travelers are he did two illustrati ons for The King&#39;s to celebrate the sil ver jubilee of nearly twenty years of close collabothe severest critics of technical details Book George V. Then in 1936 came the ration with the publicity department of the Royal Mail Company. Hi s art in maritiJne matters ....&quot; crowning point of Shoesmith &#39;s career-he was comm issioned to paint became more posterish. He began to The amount of graphic work designed mural s for the new C unarder, the Queen use tinted papers and adapt hi s technique towards econom y of design with relation by Shoesmith for such crui ses was con- Mary. Shoesmith found himself in good to these colored backgrounds. The first siderabl e. It inc luded, bes ides posters, poster he did for the Company showed press advert iseme nt s, information company. After much determination , the an aerial view of the upper decks of RMS leafl ets and the like, menus, programs architects B. Y. Morris (who designed Almanzora , which had then returned to for daily and special events , passenger the C un ard building on Broadway) and the South American route after be ing li sts, picture postcards, playing cards Arthur Dav is of London assembled a used for war service. The poster was and other souvenirs. The menus are lavi sh team of thirty arti sts in various media to received as &quot;quite novel and outstand- but unadventurous, very English in char- provide decorations which would make ing&quot; and it opened the way for the hun- acter. The backs of the menus were re- the ship a floating art ga llery. Shoesmith dreds of designs Shoesmith subsequentl y served for autogra ph s of the captain and was commi ss ioned for mural s in the two other exc iting people one might meet. Catholi c chapels, 1st cl ass and tourist made for the Royal Mail Company. In the 1920s hi s work included graph- Such was the atmosphere of the great class , and the tourist class writing room. For the tourist writing room he painted ics fo r th e RMS liners Astu ria s, days of crui sing-a Noel Coward ex istAlcantara , Andes, Arlanza, Alman zora e nce for three weeks to forget about two octagonal panels recalling England &#39;s SEA HISTORY 73, SPRING 1995