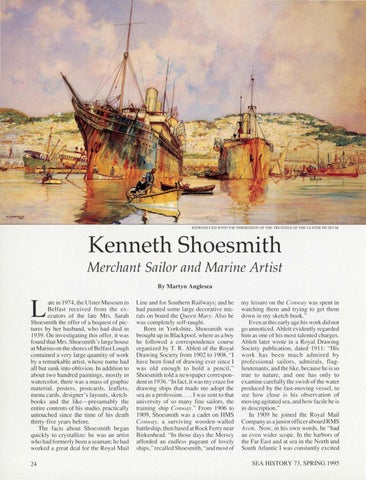 ate in 1974, the Ul ster Museum in Be lfas t received fr om the ex ecutors of the late Mrs. Sarah Shoesmith the offer of a bequest of pictures by her husband, who had di ed in 1939. On inves tigating thi s offer, it was fo und that M rs. Shoesmith &#39;s large house at Marino on the shores of Be lfas t Lough contained a very large quantity of wo rk by a remarkable arti st, whose name had all but sun k into obli vion. In addition to about two hundred paintings, mostl y in watercolor, there was a mass of graphic mate ri al, posters, postcard s, leafl ets, menu cards, designer&#39;s layo uts, sketchbooks and the like-presumabl y the entire contents of hi s studio, practica ll y unto uched since the time of hi s death thirty-fi ve years before. The fac ts about Shoesmith began qui ckl y to crys talli ze: he was an arti st who had fo rmerl y been a seaman; he had wo rked a great deal fo r the Royal Mail 24

Line and fo r Southern Rai lways; and he had painted some large decorati ve mura ls on board the Queen Mary. Also he was complete ly self- taught. Born in Yorkshire, Shoesmith was bro ught up in Blac kpoo l, where as a boy he fo ll owed a correspondence course organi zed by T. R. Ablett of the Royal Drawing Soc iety from 1902 to 1908. &quot; I have been fo nd of draw ing ever since I was o ld eno ugh to ho ld a penc il ,&quot; Shoesmith to ld a newspaper correspondent in 1936. &quot; In fac t, it was my craze for draw ing shi ps that made me adopt the sea as a profess ion . . .. I was sent to that uni versity of so many fi ne sail ors, the tra ining ship Conway.&quot; From 1906 to 1909, S hoesmi th was a cadet on HMS Conway, a surviv ing wooden-wall ed battleship, then based at Rock Ferry near Bi rkenhead. &quot; In those days the Mersey affo rded an end less pageant of lovely ships,&quot; reca lled Shoesmith , &quot;and most of

my leisure on the Conway was spent in watching them and try ing to get them down in my sketch book.&quot; Even at thi s early age hi s work did not go unnoticed. Ablett ev ide ntl y regarded him as one of hi s most talented charges. Ab lett later wro te in a Royal Draw ing Soc iety publication, dated 19 11 : &quot; Hi s work has bee n mu c h ad mi re d b y p rofess iona l sa i Io rs, admi ra ls, fl aglie utenants, and the li ke, because he is so true to nature, and one has onl y to examine carefull y the sw ish of the water prod uced by the fas t-mov ing vessel, to see how c lose is hi s observation of mov ing ag itated sea, and how fac ile he is in descript ion.&quot; In 1909 he joined the Roya l Mail Company as aju niorofficeraboard RMS Avon. Now, in his own words, he &quot;had an even wider scope. In the harbors of the Far East and at sea in the No rth and South Atlanti c I was constantl y excited SEA HISTORY 73, SPRING 1995