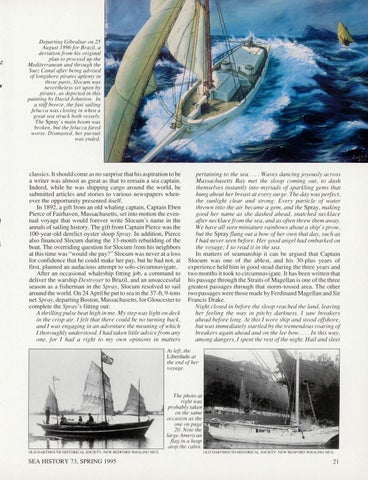 Deparring Gihralrar on 25 Augusr 1896 f or Brazil, a de viation ji&quot;om his original plan to proceed up th e Medir erranean and through the Suez Canal ajier being advised of longshore pirates aplenty in those parts, Slocum was nevertheless ser upon by pirates , as depicred in rhis painting by Da vid Johnston. In a sriff breeze, the f ast sailing f elu cca was closing in when a great sea struck both vessels. Th e Spray&#39;s main boom was broken , hut rhe f elu ccafared worse. Dismasred , her pursuit was ended.

classics. It should come as no surprise that his aspiration to be a writer was almost as great as that to remain a sea captain . Indeed , while he was shipping cargo around the world, he submitted articles and stories to various newspapers whenever the opportunity presented itself. In 1892, a gift from an old whaling captain, Captain Eben Pierce of Fairhaven, Massachusetts, set into motion the eventual voyage that would forever write Slocum&#39;s name in the annals of sailing hi story . The gift from Captain Pierce was the I 00-year-old derelict oyster sloop Spray. In addition, Pierce also financed Slocum during the 13-month rebuilding of the boat. The overriding question for Slocum from his neighbors at this time was &quot;would she pay?&quot; Slocum was never at a loss for confidence that he could make her pay, but he had not, at first, planned an audacious attempt to solo-circumnavigate. After an occasional whaleship fitting job, a command to deliver the warship Destroyer to Brazil , and an unsuccessful season as a fisherman in the Spray, Slocum resolved to sail around the world . On 24 April he put to sea in the 37-ft, 9-tons net Spray, departing Boston, Massachusetts, for Gloucester to complete the Spray&#39; s fitting out: A thrilling pulse beat high in me. My step was light on deck in the crisp air. I felt that there could be no turning back, and I was engaging in an adventure the meaning of which I thoroughly understood. I had taken little advice from any one, for I had a right to my own opinions in matters

pertaining to the sea . ... Waves dancing joyously across Massachusetts Bay met the sloop coming out, to dash themselves instantly into myriads of sparkling gems that hung about her breast at every surge . The day was pe1fect, the sunlight clear and strong. Every particle of water thrown into the air became a gem , and the Spray, making good her name as she dash ed ahead, snatched necklace after necklace from the sea , and as often threw them away. We have all seen miniature rainbo ws about a ship&#39; s prow, but the Spray flun g out a bow of her own that day, such as I had never seen bef ore. Her good angel had embarked on the voyage; I so read it in the sea. In matters of seamanship it can be argued that Captain Slocum was one of the ablest, and his 30-plus years of experience held him in good stead during the three years and two months it took to circumnavigate. It has been written that his passage through the Straits of Magellan is one of the three greatest passages through that storm-tossed area. The other two passages were those made by Ferdinand Magellan and Sir Francis Drake. Night closed in bef ore the sloop reached the land, lea ving her f eeling the way in pitchy darkness. I saw breakers ahead before long. At this I wore ship and stood offsh ore, but was immediately startled by the tremendous roaring of breakers again ahead and on the lee bow . . . . In this way , among dan gers , I spent the rest of the night. Hail and sleet

Ar left , the Liberdade at the end of her voyage.