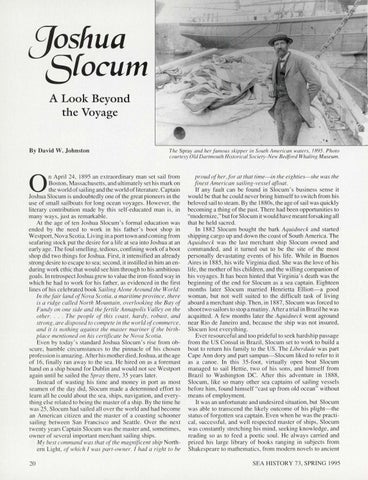 n April 24, 1895 an extraordinary man set sail from Boston, Massachusetts, and ultimately set hi s mark on the world of sailing and the world ofl iterature. Captain Joshua Slocum is undoubtedly one of the great pioneers in the use of small sailboats for long ocean voyages. However, the literary contribution made by this self-educated man is, in many ways, just as remarkable. At the age of ten Joshua Slocum&#39;s formal education was ended by the need to work in his father&#39;s boot shop in Westport, Nova Scotia. Living in a port town and coming from seafaring stock put the desire for a life at sea into Joshua at an early age. The foul smelling, tedious , confining work of a boot shop did two things for Joshua. First, it intensified an already strong desire to escape to sea; second, it instilled in him an en during work ethic that would see him through to hi s ambitious goals. In retrospect Joshua grew to value the iron-fisted way in which he had to work for his father, as evidenced in the first lines of his celebrated book Sailing Alone Around the World: In the.fa ir land of Nova Scotia, a maritime province, there is a ridge called North Mountain , overlooking the Bay of Fundy on one side and the.fertile Annapolis Valley on the other. . . The people of this coast, hardy, robust, and strong, are disposed to compete in the world of commerce, and it is nothing against the master mariner if the birthplace mentioned on his certificate be Nova Scotia. Even by today&#39;s standard Joshua Slocum&#39;s rise from obscure, humble circumstances to the pinnacle of his chosen profession is amazing. After hi s mother died, Joshua, at theage of 16, finally ran away to the sea. He hired on as a foremast hand on a ship bound for Dublin and wou ld not see Westport again until he sailed the Spray there, 35 years later. Instead of wasting his time and money in port as most seamen of the day did , Slocum made a determined effort to learn all he could about the sea, ships , navigation , and everything else related to being the master of a ship. By the time he was 25 , Slocum had sailed all over the world and had become an American citizen and the master of a coasting schooner sa iling between San Francisco and Seattle. Over the next twenty years Captain Slocum was the master and, sometimes, owner of several important merchant sailing ships. My best command was that of the magnificent ship Northern Light, of which I was part-owner. I had a right to he

proud of her,for at that time- in the eighties- she was the fin est American sailing-vessel afloat. If any fault can be found in Slocum&#39;s business sense it would be that he cou ld never bring himself to switch from hi s beloved sai l to steam. By the 1880s, the age of sai l was quickly becoming a thing of the past. There had been opportunities to &quot;modernize,&quot; but for Slocum it would have meant forsaking all that he held sacred. In 1882 Slocum bought the bark Aquidneck and started sh ipping cargo up and down the coast of South America. The Aquidneck was the last merchant ship Slocum owned and commanded , and it turned out to be the site of the most personally devastating events of his life. While in Buenos Aires in 1885, his wife Virginia died . She was the love of hi s life, the mother of hi s children , and the willing companion of his voyages. It has been hinted that Virginia &#39;s death was the beginning of the end for Slocum as a sea captain. Eighteen months later Slocum married Henrietta Elli ott-a good woman, but not well su ited to the difficult task of living aboard a merchant ship. Then, in 1887, Slocum was forced to shoot two sai lors to stop a mutiny. After a trial in Brazil he was acquitted. A few months later the Aquidneck went aground near Rio de Janeiro and, because the sh ip was not insured, Slocum lost everything. Ever resourceful and too prideful to seek hardship passage from the US Consul in Brazil , Slocum set to work to build a boat to return his family to the US. The Liberdade was part Cape Ann dory and part sampan-Slocum liked to refer to it as a canoe. In thi s 35-foot, virtually open boat Slocum managed to sa il Hettie, two of his sons, and him self from Brazil to Washington DC. After this adventure in 1888, Slocum, like so many other sea captains of sailing vessels before him, found himself &quot;cast up from old ocean&quot; without means of employment. It was an unfortunate and undesired situation, but Sloc um was able to transcend the likely outcome of his plight-the status of forgotten sea captain. Even when he was the practica l, successful , and well respected master of ships, Slocum was constantly stretching his mind , seeking knowledge, and reading so as to feed a poetic soul. He always carried and prized hi s large library of books ranging in subjects from Shakespeare to mathematics , from modern novel s to ancient SEA HISTORY 73 , SPRING 1995