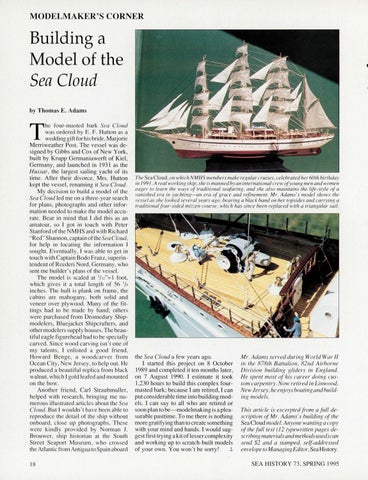 Building a Model of the

Sea Cloud by Thomas E. Adams he four-masted bark Sea Cloud was ordered by E. F. Hutton as a wedding gift for hi s bride, Marjorie Merriweather Post. The vessel was designed by Gibbs and Cox of New York , built by Krupp Germaniawerft of Kiel , Germany, and launched in 1931 as the Hussar , the largest sailing yacht of its time. After their divorce, Mrs. Hutton kept the vessel, renaming it Sea Cloud. My deci sion to build a model of the Sea Cloud led me on a three-year search for plan s, photographs and other information needed to make the model accurate. Bear in mind that I did this as an amateur, so I got in touch with Peter Stanford of the NMHS and with Richard &quot;Red &quot; Shannon, captain of the Sea Cloud, for help in locating the information I sought. Eventually, I was able to get in touch with Captain Bodo Franz, superintendent of Reederi Nord, Germany , who sent me builder&#39;s plans of the vessel. The mode l is scaled at 5/32&quot;=! foot, which gives it a total length of 56 3/~ inches. The hull is plank on fram e, the cabins are mahogany , both solid and veneer over plywood. Many of the fittings had to be made by hand ; others were purchased from Dromedary Shipmodelers, Bluejacket Shipcrafters, and other mode lers supply houses. The beautiful eagle fi gurehead had to be specially carved. Since wood carving isn &#39;t one of my tal ents, I enli sted a good friend , Howard Benge, a woodcarver from Ocean City, New Jersey , to help out. He produced a beautiful replica from black walnut, which l gold leafed and mounted on the bow . Another friend, Carl Straubmuller, he lped with research, bringing me numerous illustrated articles about the Sea Cloud. But I wo uldn &#39; t have been able to re produce the detail of the ship without onboard , close up photograph s. These were kindly provided by Norman J. Brouwer, ship hi storian at the South Street Seaport Museum , who crossed the Atlantic from Antigua to Spain aboard

the Sea Cloud a few years ago. I started this project on 8 October 1989 and completed it ten months later, on 7 August 1990. I estimate it took 1,230 hours to build this complex fourmasted bark; because I am retired , I can put considerable time into building models. I can say to all who are retired or soon plan to be-modelmaking is a pleasurable pasttime. To me there is nothing more gratifying than to create something with your mind and hands. I would suggest first trying a kit of lesser complexity and working up to scratch-built models of your own. You won &#39; t be sorry! .:t