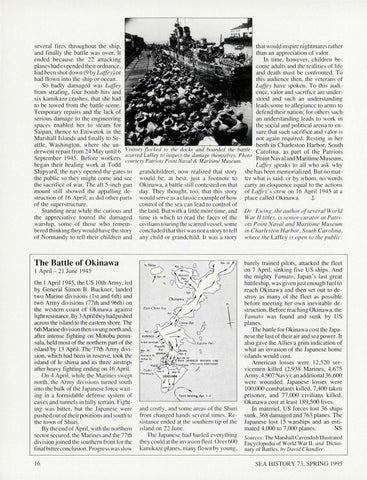 several fires throughout the ship , that would inspire nightmares rathe r and fin ally the battl e was over. It th an an a pprec iation of valor. e nded beca use the 22 attacking In time, however, c hildre n bepl anes had expe nded theirordnance, come adults and the rea lities of life had been shot down (9 by Laffey) or and death must be confronted. To had flown into the ship o r ocean. thi s audience then , the veterans of So badl y damaged was Laffey Laffey have spoken. To thi s a udi from strafing, four bomb hits and e nce, valor and sacrifice are unde rsix kamikaze crashes, that she had stood a nd suc h an unde rstanding to be towed from the battle scene. leads some to all egiance to a rm s to Temporary repairs and the lac k of defend thei r natio n; for o thers s uch serious damage to the eng ineerin g an understanding leads to work in the soc ial and political arena to enspaces e na bled her to steam for Saipan, the nce to Eniwetok in the sure that s uc h sacrifice and va lor is Marshall Is lands and fin a ll y to Senot again required. Resting in he r attl e, Washington , where she un be rth in C harleston Harbor, South derwe nt re pair from 24 May until 6 Visitors .flo cked to the docks and hoarded the baltle- Carolina , as part o f th e Patriots scarred Laffey to inspect the damage themselves. Photo September 1945 . Before worke rs courtesy Patriots Point Naval &amp; Maritime Museum. Po int Nava l and Maritime Museum , began the ir healing work at Todd Laffey speaks to all who ask why Shipyard, the navy opened the gates to grandc hild re n, now realized that story she has been memorialized . But no matthe public so they mig ht come and see wou ld be, at best, just a footnote to ter what is sa id , or by whom, no words the sacrifice of war. The aft 5-inch g un Okinawa, a battle still contested on that carry an e loq ue nce eq ual to the ac tio ns mount still showed the a ppalling de- day. They tho ug ht, too, that thi s story of Laffey&#39;s crew on 16 April 1945 at a ,t struc tion of 16 April , as did o the r parts wou Id serve as a classic exampl e of how place call ed Okinawa. of the supe rstructure. con trol of the sea can lead to control of Standing near while the c urio us a nd the land . But with a little more time , and Dr. Ewing, th e a uthor of sevelÂˇa l World the apprec iative toured the damaged time in wh ich to read the faces of the War II titles, is senior curator at Patriwarship, some of those who re me m- civ ilians touring the scarred vessel, some ots Point Naval and Ma ritim e Mu seum bered thinking they wo uld have the sto ry concluded that this was no t a story to tell in Cha rleston H arbor, South Caro lina , o f Normandy to te ll the ir children a nd any child o r grandchild. It was a story where rh e Laffey is open to th e public.

The Battle of Okinawa I April - 2 1 June 1945 On l April 1945, the US 10th Army, led by General Simon B. Buckne r, landed two M arine divi sions ( I st and 6th ) and two Army divi sions (77 th and 96th ) o n the western coast of Okinawa against Iight resistance.By 3 April they had pushed across the island to the easte rn sho re. The 6th Marine divi sion then swung north and , after intense fi ghting on Motobu pe ninsula, held most of the northern part of the island by 13 April. The 77th Army division, which had been in reserve, took the island of le shima and its three airstrips after heavy fighting endi ng on 16 April. On 4 April , while the Marines swept north , the Arm y division s turned south into the bulk of the Japanese fo rce waiting in a formidable defense system of caves and tunnels in hill y terrain. Fighting was bitter, but the Japa nese we re pushed o ut of their pos itio ns and south to the town of Shuri . By theend of April , wi th the northern secto r secured, the Marines and the 77 th divi sion jo ined the southe rn front fort he fin al bitter conclu sion. Progress was slow 16

and cost Iy, and some areas of the Shuri fro nt c hanged hands several times. Resistance ended at the southe rn tip of the island on 22 June. The Japanese had hurled everything they could atthe in vas io n fleet. Over600 kamikaze planes, many fl own by yo ung,

barely trained pil ots, attacked the fl eet o n 7 April , s inking five US ships. And the mig hty Yamato, Japan&#39;s last great battleship, was give n just e nough fuel to reach Okinawa a nd then set out to destroy as many of the flee t as poss ible before meeting her own inev itabl e destruc ti o n. Before reaching Okinawa, the Yamato was fo und and sunk by US planes. The battle for Okinawa cost the Japanese the las t of their air and sea power. It also gave the Allies a grim indicatio n of what an invasion of the Japanese home is lands would cost. American losses were 12,520 serviceme n killed (2,938 Marines, 4 ,675 Army, 4,907 Navy); an additional 36,600 were wounded . Japanese losses were I 00,000 combatants killed , 7,400 taken pri soner, and 77,000 civ ilian s killed . Okinawa cost at least 189,500 lives. In materie l, US forces lost 36 ships sunk , 368 damaged and 763 planes. The Japa nese lost 15 warships and an esti NS mated 4,000 to 7 ,000 planes. Sources: The Marshall Cavendish Illustrated Encyc lopedia of World War 11; and Dictionary of Battles, by David Chandler.