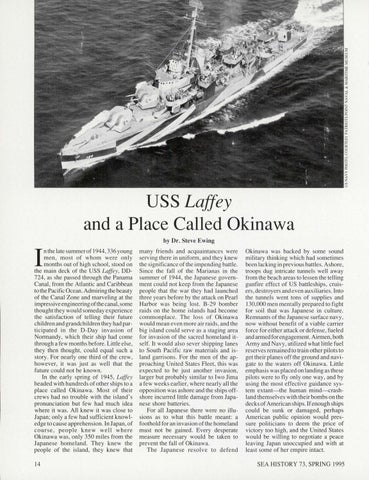 USS Laffey and a Place Called Okinawa by Dr. Steve Ewing n the late summerof 1944, 336 young men , most of whom were only months out of high school, stood on the main deck of the USS Laffey, DD724, as she passed through the Panama Canal, from the Atlantic and Caribbean to the Pacific Ocean. Admiring the beauty of the Canal Zone and marveling at the impressiveengineeringofthecanal,some thought they would someday experience the satisfaction of telling their future children and grandchildren they had participated in the D-Day invasion of Normandy , which their ship had come through a few months before. Little else, they then thought, could equal such a story. For nearly one third of the crew, however, it was just as well that the future could not be known. In the early spring of 1945 , Laffey headed with hundreds of other ships to a place called Okinawa. Most of their crews had no trouble with the island &#39;s pronunciation but few had much idea where it was. All knew it was close to Japan; only a few had sufficient knowledge to cause apprehension. In Japan, of course , people knew well where Okinawa was, only 350 miles from the Japanese homeland. They knew the people of the island , they knew that

many friend s and acquaintances were serving there in uniform , and they knew the significance of the impending battle. Since the fall of the Marianas in the summer of 1944, the Japanese government could not keep from the Japanese people that the war they had launched three years before by the attack on Pearl Harbor was being lost. B-29 bomber raids on the home islands had become commonplace. The loss of Okinawa would mean even more air raids , and the big island could serve as a staging area for invasion of the sacred homeland itself. It would also sever shipping lanes to South Pacific raw materials and island garrisons. For the men of the approaching United States Fleet, this was expected to be just another invasion , larger but probably similar to Iwo Jima a few weeks earlier, where nearly all the opposition was ashore and the ships offshore incurred little damage from Japanese shore batteries. For all Japanese there were no illusions as to what this battle meant: a foothold for an invasion of the homeland must not be gained. Every desperate measure necessary would be taken to prevent the fall of Okinawa. The Japanese resolve to defend

Okinawa was backed by some sound military thinking which had sometimes been lacking in previous battles. Ashore, troops dug intricate tunnels well away from the beach areas to lessen the telling gunfire effect of US battleships, cruisers, destroyers and even auxiliaries. Into the tunnel s went tons of supplies and 130,000 men mentally prepared to fight for soil that was Japanese in culture. Remnants of the Japanese surface navy, now without benefit of a viable carrier force for either attack or defense, fueled and armed for engagement. Airmen, both Army and Navy, utilized what little fuel reserves remained to train other pilots to get their planes off the ground and navigate to the waters off Okinawa. Little emphasis was placed on landing as these pilots were to fly only one way , and by using the most effective guidance system extant-the human mind--crashland themselves with their bombs on the decks of American ships. If enough ships could be sunk or damaged , perhaps American public opinion would pressure politicians to deem the price of victory too high , and the United States would be willing to negotiate a peace leaving Japan unoccupied and with at least some of her empire intact. SEA HISTORY 73, SPRING 1995