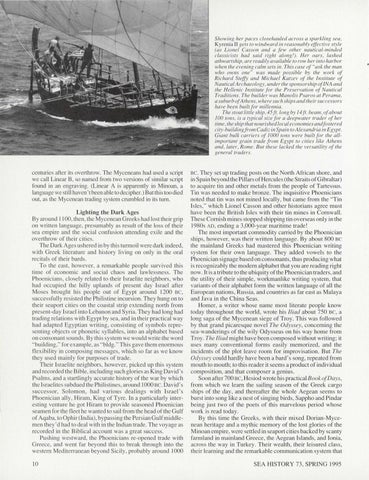 Showing her paces closehauled across a sparkling sea , Kyrenia II gets to windward in reasonably effective style (as Lionel Casson and a few other nautical-minded classicists had said right along!). Her oars, lash ed a thwarts hip , are readily available to row her into harbor when. the evening calm sets in. This case of &quot;ask th e man who owns one&quot; was made possible by the work of Richard Steffy and Mi chael Katzev of the In stitute of Nautical Archaeology, under the sponsorship of/NA and the Hellenic In stitute for th e Preservation of Nauti cal Traditions. Th e builder was Man olis Psaros at Perama , a suburb ofAthens, where such ships and their successors have been built for millennia. The stout lirrle ship, 45.ft. long by 14 ft. beam, ofabout 100 tons, is a typical size for a deepwater trader of her time, the ship that nourished local economies and.fostered ciry-buildingfrom Cadiz in Spain to Alexandria in Egypt. Giant bulk carriers of 1000 tons were built for th e al/important gra in trade from Egypt to cities like Athens and, Later, Rome. But these lacked the versatility of the genera l traders.

centuries after its overthrow. The Myceneans had used a script we call Linear B, so named from two versions of similar script found in an engraving. (Linear A is apparently in Minoan, a language we still haven &#39;t been able to decipher.) But this too died out, as the Mycenean trading system crumbled in its tum.

Lighting the Dark Ages By around 1100, then , the Mycenean Greeks had lost their grip on written language, presumably as result of the loss of their sea empire and the soc ial confusion attending exile and the overthrow of their cities. The Dark Ages ushered in by this turmoil were dark indeed, with Greek literature and hi story living on only in the oral recital s of their bards. To the east, however, a remarkable people survived this time of economic and social chaos and lawlessness. The Phoenicians, closely related to their Israelite neighbors, who had occupied the hilly uplands of present day Israel after Moses brought his people out of Egypt around 1200 BC, successfully res isted the Philistine incursion. They hung on to their seaport cities on the coastal strip extending north from present-day Israel into Lebanon and Syria. They had long had trading relations with Egypt by sea, and in their practical way had adapted Egyptian writing, consisting of symbols representin g objects or phonetic sy llables , into an alphabet based on consonant sounds. By this system we would write the word &quot; building ,&quot; for example, as &quot; bldg. &quot; This gave them enormous flexibility in composing messages, which so far as we know they used mainly for purposes of trade. Their Israelite neighbors, however, picked up this system and recorded the Bible, including such glories as King David &#39;s Psalms, and a startlingly accurate history of the war by which the Israelites subdued the Philistines, around 1000 BC. David&#39;s successor, Solomon, had various dealings with Israel&#39;s Phoenician ally, Hiram , King of Tyre. In a particularly interesting venture he got Hiram to provide seasoned Phoenician seamen for the fleet he wanted to sai l from the head of the Gulf of Aqaba, to Ophir (India), bypassing the Persian Gulf middlemen they&#39; d had to deal with in the Indian trade. The voyage as recorded in the Biblical account was a great success. Pushing westward, the Phoenicians re-opened trade with Greece, and went far beyond this to break through into the western Mediterranean beyond Sicily, probably around 1000 10

BC. They set up trading posts on the North African shore, and in Spain beyond the Pillars of Hercules (the Straits of Gibraltar) to acq uire tin and other metals from the people of Tartessus. Tin was needed to make bronze. The inqui sitive Phoenicians noted that tin was not mined loca lly , but came from the &quot;Tin Isles,&quot; which Lionel Casson and other historian s agree must have been the British Isles with their tin mines in Cornwall. These Cornish mines stopped shipping tin overseas only in the 1980s AD, ending a 3,000-year maritime trade! The most important commodity carried by the Phoenician ships, however, was their written language. By about 800 BC the mainland Greeks had mastered this Phoenician writing system for their own lang uage. They added vowels to the Phoenician signage based on consonants, thus producing what is recognizably the modern alphabet that you are reading right now. It is a tribute to the ubiquity of the Phoenician traders, and the utility of their simple, workmanlike writing system, that variants of their a lphabet fo1m the written language of all the European nations, Russia, and countries as far east as Malaya and Java in the China Seas. Homer, a writer whose name most literate people know today throughout the world, wrote hi s Iliad about 750 BC, a long saga of the Mycenean siege of Troy. This was followed by that grand picaresque novel Th e Odyssey, concerning the sea-wanderings of the wily Odysseus on hi s way home from Troy. The Iliad might have been composed without writing; it uses many conventional forms eas il y memorized, and the incidents of the plot leave room for improvisation. But The Odyssey cou ld hardly have been a bard&#39;s song, repeated from mouth to mouth; to this reader it seems a product of individual composition, and that composer a gen iu s. Soon after700 BC, Hesiod wrote his practical Book ofDays, from which we learn the sailing season of the Greek cargo sh ips of the day, and thereafter the whole Aegean seems to burst into song like a nest of si nging birds, Sappho and Pindar being just two of the poets of this marvelous period whose work is read today. By this time the Greeks , with their mixed Dorian-Mycenean heritage and a mythic memory of the lost glories of the Minoan empire, were settled in seaport cities backed by scanty farmland in mainland Greece, the Aegean Islands , and Ionia, across the way in Turkey. Their wealth, their leisured class, their learn ing and the remarkable communication system that