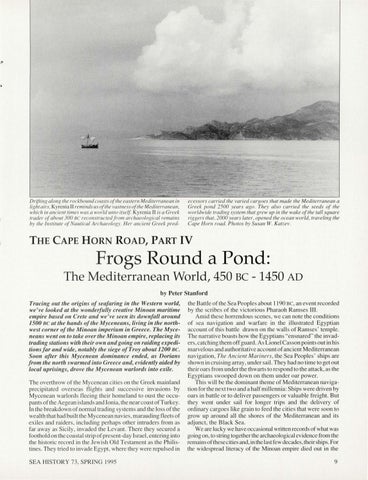 Drifting along the rockbound coasts ofthe eastern Mediterran ean in lighr airs, Kyrenia II reminds us ofthe vastness ofthe Mediterranean , which in ancient times was a world unto itself Kyrenia II is a Greek trader of about 300 BC reconstructed from archaeological remains by the In stitute of Nautical Archaeology. Her ancient Greek pred-

ecessors carried the varied cargoes that made the Mediterranean a Greek pond 2500 years ago . They also carried the seeds of the worldwide trading system that grew up in the wake of the tall square riggers that, 2000 years later, opened the ocean world, traveling th e Cape Horn road. Photos by Susan W. Katze v.

Frogs Round a Pond: The Mediterranean World, 450 BC -1450 AD by Peter Stanford

Tracing out the origins of seafaring in the Western world, we&#39;ve looked at the wonderfully creative Minoan maritime empire based on Crete and we&#39;ve seen its downfall around 1500 BC at the hands of the Myceneans, living in the northwest corner of the Minoan imperium in Greece. The Myceneans went on to take over the Minoan empire, replacing its trading stations with their own and going on raiding expeditions far and wide, notably the siege of Troy about 1200 BC. Soon after this Mycenean dominance ended, as Dorians from the north swarmed into Greece and, evidently aided by local uprisings, drove the Mycenean warlords into exile. The overthrow of the Mycenean cities on the Greek mainland precipitated overseas flights and successive invasions by Mycenean warlords fleeing their homeland to oust the occupants of the Aegean islands and Ionia, the nearcoastofTurkey. In the breakdown of normal trading systems and the loss of the wealth that had built the Mycenean navies , marauding fleets of exi les and raiders, including perhaps other intruders from as far away as Sicily, invaded the Levant. There they secured a footho ld on the coastal strip of present-day Israel , entering into the hi storic record in the Jewi sh Old Testament as the Phili stines. They tried to invade Egypt, where they were repulsed in SEA HISTORY 73 , SPRING 1995

the Battle of the Sea Peoples about 11 90 BC, an event recorded by the scribes of the victorious Pharaoh Ramses III. Amid these horrendous scenes, we can note the conditions of sea navigation and warfare in the illustrated Egyptian account of this battle drawn on the walls of Ramses &#39; temple. The narrative boasts how the Egyptians &quot;ensnared&quot; the invaders, catch ing them off guard. As Lionel Casson points out in his marvelou s and authoritative account of ancient Mediterranean navigation , The Ancient Mariners, the Sea Peoples&#39; ships are shown in cruising array, under sa il. They had no time to get out their oars from under the thwarts to respond to the attack, as the Egyptians swooped down on them under oar power. This wi ll be the dominant theme of Mediterranean navigation for the next two and a half millennia: Ships were driven by oars in battle or to deliver passengers or va luable freight. But they went under sai l for longer trips and the delivery of ordinary cargoes like grain to feed the cities that were soon to grow up around all the shores of the Mediterranean and its adjunct, the Black Sea. We are lucky we have occasional written records of what was going on, to string together the archaeological evidence from the remains of these cities and, in the last few decades, their ships. For the widespread literacy of the Minoan empire died out in the