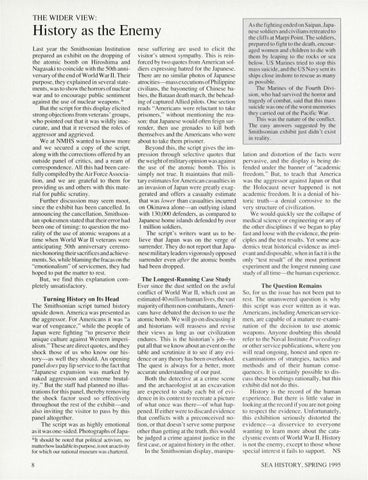 History as the Enemy Last year the Smithsonian Institution prepared an ex hibit on the dropping of the atomic bomb on Hiroshima and Nagasaki to coincide with the 50th anni versary of the end of World War II. Their purpose, they explained in several stateme nts, was to show the horrors of nuclear war and to e ncourage public sentiment aga inst the use of nuclear weapons.* But the script for thi s di splay e licited strong objections from veterans&#39; g roups, who pointed out that it was wildl y inaccurate, and that it reversed the rol es of aggressor and aggrieved . We at NMHS wanted to know more and we secured a copy of the sc ript, along with the corrections offered by an outside panel of critics , and a ream of correspondence. All this had been carefully compiled by the Air Force Association , and we are grateful to them for providing us and others with thi s material for public scrutiny. Further di scussion may seem moot, since the exhibit has been cance ll ed. In announcing the cancellation , Smithson ian spokesmen stated that their error had been one of timing: to question the morality of the use of atomic weapons at a time when World War II veteran s were anticipating 50th annive rsary cere monies honoring their sacrifices and ac hie vements. So, while blaming the fracas on the &quot;emotionali sm&quot; of servicemen, they had hoped to put the matte r to rest. But, we find thi s e xplanation completely unsati sfactory.

Turning History on Its Head The Smithsonian script turned hi story upside down. America was presented as the aggressor. For Americans it was &quot; a war of vengeance,&quot; while the people of Japan were fighting &quot; to preserve their unique culture again st Weste rn impe ri ali sm. &quot; These are direc t quotes, and they shock those of us who know our hi story- as well they should. An opening panel does pay lip servi ce to the fa ct that &quot;Japanese e xpansion was marked by naked agg ression and ex treme brutality. &quot; But the staff had planned no illustration s for thi s panel , the re by re moving the shock fa ctor used so effective ly throug hout the rest of the ex hibit- and al so inviting the vi sitor to pass by thi s panel altogether. The script was as hi ghl y e motional as it was one-s ided. Photog raphs of Japa*It should be noted that political activism, no matter how laudable its purpose, is not an activity for which our national museum was chartered.

nese suffe rin g are used to e lic it the visitor &#39;s utmost sympathy. Thi s is reinforced by two quotes from American soldiers expressing hatred for the Japanese. There are no similar photos of Japanese atrocities-mass executions of Ph ii ippine civilians, the bayoneting of Chinese babies, the Bataan death march, the beheading of captured Allied pilots. One section reads &quot; Americans were reluctant to take prisoners,&quot; without mentioning the reason: that Japanese wo uld often feign surrender, then use grenades to kill both themselves and the Americans who were about to take them pri soner. Beyond thi s, the script g ives the impression through se lective quotes that the weight of military opinion was against the use of the atomi c bomb. Thi s is s imply not true. It maintains that military estimates for Ame ri can casualties in an invasion of Japan we re greatl y exaggerated and offers a casualty estimate that was lower than casualties incurred on Okinawa alone-an o utlying island with 130,000 defenders, as compared to Japanese home islands defended by over I million soldiers. The script &#39;s writers want us to believe that Japan was on the verge of surrender. They do not report that Japanese military leade rs vigorously opposed surrender even after the atomic bombs had bee n dropped.

As the fig hting ended on Saipan, Japanese soldiers and civilians retreated to the cliffs at Marpi Point. The soldiers, prepared to fi ght to the death , encouraged women and children to die with them by leaping to the rock s or sea below . US Marines tried to stop thi s mass suicide, and the US Navy sent it s ships close inshore to rescue as many as possible. The Marines of the Fourth Division , who had survived the horror and tragedy of combat, said that this mass suicide was one of the worst memories they carried out of the Pacific War. This was the nature of the contlict. The easy answers suggested by the Smithsoni an ex hibit just didn &#39;t exi st in reality. lation and di sto rtion of the fac ts we re pervas ive, and the di spl ay is be ing defe nded unde r the banner of &quot;acade mic freedom. &quot; But, to teach that Ame ri ca was the agg ressor again st Japan o r that the Holocaust never happe ned is not acade mic free do m. It is a de ni al of hi storic truth- a de ni al corros ive to the ve ry structure of c ivili zatio n. We wo uld quickl y see the collapse of medical sc ience or e ngineering or any of the other di sc iplines if we began to play fas t and loose with the evidence, the principl es and the test results. Yet some academics treat hi storical evidence as irrelevant and di sposable, when in fac t it is the onl y &quot; test result&quot; of the most pertine nt ex pe riment and the longest running case study of all time-the human expe rience.

The Longest-Running Case Study Ever since the dust settled on the awful conflict of W orld War II , which cost an estimated 40 million human lives, the vast majority of them non-combatants, Americans have debated the decison to use the atomic bomb. We will go on discussing it and historians will reassess and rev ise their views as long as our civilizati on endures. This is the hi storian &#39; s job--to put all that we kno w abo ut an event on the table and scrutinize it to see if any ev idence or any theory has been overlooked . The quest is always for a bette r, more accurate understanding of o ur pas t. Both the detecti ve at a crime scene and the arc haeologist at an excavation are expected to study each bit of e vidence in its contex t to recreate a pi cture of what once was there--of what happened. If e ither were to di scard ev idence that confli cts w ith a preconceived notion , or that doesn &#39; t serve some purpose other than getting at the truth , thi s would be judged a crime against justi ce in the first case, or against hi story in the other. In the Smith soni an di spl ay, m anipu-

The Question Remains So, fo r us the iss ue has not been put to rest. T he un answered question is wh y thi s script was ever writte n as it was. Ame ricans, including Ame rican serviceme n, are capable of a mature re-exami nation of the decision to use atomic weapo ns. Anyone do ubting thi s sho uld refer to the Naval Institute Proceedings o r o the r serv ice publi cations, whe re yo u will read o ngoing, ho nest and o pe n reexaminati o ns of stra teg ies, tactics and me thods a nd of the ir human con seque nces . It is certainl y poss ible to di sc uss these bombings rati o nall y, but thi s ex hibit did no t do thi s. Hi sto ry is the record of the human ex pe ri ence. But there is littl e value in looking at the record if yo u are not go ing to respect the evi de nce. U nfo rtunately, thi s ex hibiti o n serio usly di sto rted the ev id e nce-a d isserv ice to eve ryo ne wa nting to learn mo re abo ut the catac lys mic events of W orld W ar II. Hi sto ry is no t the e ne my, except to those whose spec ia l in terest it fa il s to support. NS SEA HISTORY, SPRING 1995