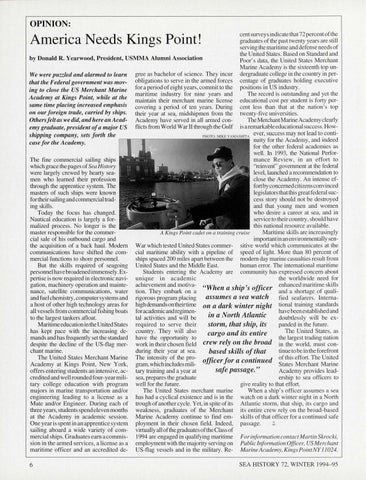 OPINION: cent surveys indicate that 72 percent of the graduates of the past twenty years are still serving the maritime and defense needs of the United States. Based on Standard and by Donald R. Yearwood, President, USMMA Alumni Association Poor's data, the United States Merchant Marine Academy is the sixteenth top unWe were puzz.led and alarmed to learn gree as bachelor of science. They incur dergraduate college in the country in perthat the Federal government was mov- obligations to serve in the armed forces centage of graduates holding executive ing to close the US Merchant Marine for a period of eight years, commit to the positions in US industry. The record is outstanding and yet the maritime industry for nine years and Academy at Kings Point, while at the maintain their merchant marine license educational cost per student is forty persame time placing increased emphasis covering a period of ten years. During cent less than that at the nation 's top on our foreign trade, carried by ships. their year at sea, midshipmen from the twenty-five universities. The MerchantMarineAcademy clearly Others felt as we did, and here an Acad- Academy have served in all armed conemy graduate, president of a major US flicts from World War II through the Gulf is a remarkable educational success. However, success may not lead to contishipping company, sets forth the PHOTO: MIKE YAMAS HITA nuity for the Academy, and indeed case for the Academy. for the other federal academies as well. In 1993, the National Performance Review, in an effort to The fine corrunercial sailing ships "reinvent" government at the federal which grace the pages of Sea History level, launched a recommendation to were largely crewed by hearty seaclose the Academy. An intense efmen who learned their profession fort by concerned citizens convinced through the apprentice system. The legislators that this great federal sucmasters of such ships were known cess story should not be destroyed fortheir sailing and commercial tradand that young men and women ing skills. who desire a career at sea, and in Today the foc us has changed. service to their country, should have Nautical education is largely a forthis national resource available. malized process. No longer is the Maritime skills are increasingly master responsible for the commerA Kings Point cadet on a training cruise important in an environmentally sencial sale of his outbound cargo and the acquisition of a back haul. Modem War which tested United States commer- sitive world which communicates at the communications have shifted the com- cial maritime ability with a pipeline of speed of light. More than 80 percent of mercial functions to shore personnel. ships spaced 200 miles apart between the modem day marine casualties result from human error. The international maritime But the skills required of seagoing United States and the Middle East. Students entering the Academy are community has expressed concern about personnel have broadened immensely. Exthe worldwide need for pertise is now required in electronic navi- uniqu e in academic enhanced maritime skills gation, machinery operation and mainte- achievement and motiva"When a ship's officer and a shortage of qualjnance, satellite communications, water tion. They embark on a assumes a sea watch fied seafarers. Internaand fuel chemistry, computer systems and rigorous program placing a host of other high technology areas for high demands on their time on a dark winter night tional training standards have been established and all vessels from commercial fishing boats for academic and regimenin a North Atlantic tal activities and will be doubtlessly will be exto the largest tankers afloat. panded in the future. Maritime education in the United States required to serve their storm, that ship, its The United States, as has kept pace with the increasing de- country. They will also cargo and its entire the largest trading nation mands and has frequently set the standard have the opportunity to despite the decline of the US-flag mer- work in their chosen field crew rely on the broad in the world, must continue to be in the forefront during their year at sea. chant marine. based skills of that The United States Merchant Marine The intensity of the proof this effort. The United officer for a continued States Merchant Marine Academy at Kings Point, New York, gram, which includes milisafe passage." Academy provides leadoffers entering students an inten sive, ac- tary training and a year at ership to sea officers to credited and well rounded four-yearmili- sea, prepares the graduate tary college education with program well for the fu ture. give reality to that effort. The Unjted States merchant marine majors in marine transportation and/or When a ship's officer assumes a sea engineering leading to a license as a has had a cyclical existence and is in the watch on a dark winter night in a North Mate and/or Engineer. During each of trough of another cycle. Yet, in spite of its Atlantic storm, that ship, its cargo and three years, students spend eleven months weakness, graduates of the Merchant its entire crew rely on the broad-based at the Academy in academic session . Marine Academy continue to find em- skills of that officer for a continued safe One year is spent in an apprentice system ployment in their chosen field. Indeed, passage. t sailing aboard a wide variety of com- virtually all of the graduates of the Class of mercial ships. Graduates earn a commis- 1994 are engaged in qualifying maritime For information contact Ma rtin Skrocki, sion in the armed services, a license as a employment with the majority serving on Public Information Officer, USMerchant maritime officer and an accredited de- US-flag vessels and in the military. Re- Marine Academy, Kings Point NY 11024.