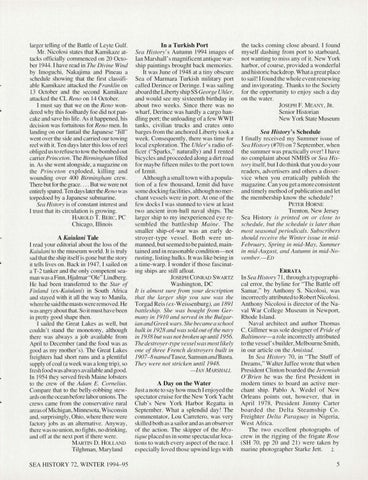 larger telling of the Battle of Leyte Gulf. Mr. Nicolosi states that Kamikaze attacks officially commenced on 20 October 1944. I have read in The Divine Wind by Imoguchi , Nakajima and Pineau a schedule showing that the first classifiable Kamikaze attacked the Franklin on 13 October and the second Kamikaze attacked the CL Reno on 14 October. I must say that we on the Reno wondered why thi s foo lhardy foe did not pancake and save hi s life. As it happened, his decision was fo rtuitous for Reno men. In land ing on our fantail the Japanese &quot;Jill&quot; went over the side and carried our towing reel with it. Ten days later thi s loss of reel obliged us to refu se to tow the bombed out carrier Princeton. The Birmingham fill ed in . As she went alongside, a magazine on the Princeton exp loded, ki llin g and wo unding over 400 Birmingham crew. There but for the grace.... But we were not entirely spared. Ten days later the Reno was torpedoed by a Japanese submarine. Sea History is of constant interest and I trust that its circulation is growing. H AROLD T. B ERC, PC Chicago, Illino is

A Kaiulani Tale I read your editori al about the loss of the Kaiulani to the museum world . It is trul y sad that the ship itself is gone but the story it tells Li ves on. Back in 1947, I sailed on a T-2 tanker and the onl y competent seaman was a Finn, Hjalmar &quot;Ole&quot; Lindberg. He had been transferred to the Star of Finland (ex-Kaiulani) in South Africa and stayed with it all the way to Manila, where he said the masts were removed. He was angry about that. Soi t must have been in pretty good shape then. I sailed the Great Lakes as well, but couldn &#39; t stand the monotony, although there was always a job availab le from April to December (and the food was as good as my mother&#39; s). The Great Lakes freighters had short runs and a plentiful supply of coal (a week was a long trip), so fresh food was always available and good. In I 954 they served fresh Maine lobsters to the crew of the Adam E. Cornelius. Compare that to the belly-robbing stewards on the ocean before labor unions. The crews came from the conservati ve rural areas of Michigan, Minnesota, Wisconsin and, surprisingly, Ohio, where there were facto ry jobs as an alternative. Anyway, there was no union, no fights, no drinking, and off at the next port if there were. MARTIN D . H OLLAND Tilghman , Maryland SEA HISTORY 72, WINTER 1994-95

In a Turkish Port Sea History&#39; s Autumn 1994 images of Ian Marshall &#39; s magnifi cent antique warship paintings brought back memories. It was June of 1948 at a tin y obscure Sea of Marmara Turkish military port called Derince or Deringe. I was sailing aboard theLibertyshipSS George Uhler, and would see my sixteenth birthday in abo ut two weeks . Since there was no wharf, Derince was hardl y a cargo handling port; the unloading of a few WWII tanks, civilian trucks and crates onto barges from the anc hored Liberty took a week. Consequently, there was time for local exploration. The Uhler&#39; s radio officer (&quot;Sparks,&quot; naturally) and I rented bicycles and proceeded along a dirt road for may be fifteen miles to the port town ofizmit. Although a small town with a populati on of a few thou sand, Izmit did have somedockingfacilities, although no merchant vessels were in port. At one of the few docks I was stunned to view at least two ancient iron-hull naval ships. The larger ship to my inex perienced eye rese mbl ed the battl es hip Maine. Th e small er ship-of-war was an early destro yer-type vessel. Both were unmanned, but seemed to be painted, maintained and in reasonable condition- not rusting, li sting hulks. It was like being in a time-warp . I wonder if those fascinating ships are still afl oat. JOSEPH CONRAD SWARTZ

Washington, DC It is almost sure from your description that the larger ship you saw was the Torgad Reis ( ex-Weissenburg), an 1891 battleship. She was bought from Germany in 1910 and served in the Bulgarian and Greek wars. She becameaschool hulk in 1928 and was sold out ofthe navy in 1938 but was not broken up until 1956. The destroyer-type vessel was most likely one of three French destroyers built in 1907- 8 namedTasoz, Samsun and Basra. They were not stricken until 1948. - / AN M ARSHALL

A Day on the Water Ju sta note to say how much I enj oyed the spectator cruise fo r the New York Yacht C lub &#39;s New York Harbor Regatta in September. What a splendid day! The commentator, Lou Carretero, was very ski Iled both as a sailor and as an observer of the action. The skipper of the Mystique pl aced us in some spectacul ar locations to watch every aspect of the race. I especially loved those upwind legs with

the tacks co ming close aboard. I fo und myself dashing from port to starboard, not wanting to mi ss any of it. New York harbor, of course, provided a wonderful and historic backdrop. What a great pl ace to sail! I found the who le event renewing and in vigorating. Thanks to the Society fo r the opportunity to enjoy such a day on the water. JOSEPH F. MEANY, JR . Senior Hi storian New York State Museum

Sea History &#39;s Schedule I finally received my Summer issue of Sea History (#70) on 7 September, when the summer was practicall y over! I have no comp laint about NMHS or Sea History itse lf, but I do think that yo u do yo ur readers, adverti sers and others a di sservice when yo u erratically publish the magazine. Can yo u get a more consiste nt and time ly method of publication and let the membership know the schedule? P ETER H ORNE

Trenton, New Jersey Sea History is printed on or close to schedule, but the schedule is later than most seasonal periodicals. Subscribers should receive the Winter issue in midFebruary, Spring in mid-May, Summer in mid-August, and Autumn in mid-November. -ED ERRATA In Sea History 7 1, through a typographi cal error, the byline for &quot;The Battl e off Samar,&quot; by Anthony S. Nicolosi , was incorrectly attributed to Robert Nicolos i. Anthony Nicolosi is director of the Naval War Co ll ege Museum in Newport, Rhode Island. Naval architect and author Thomas C. Gillmer was sole designer of Pride of Baltimore-a ro le incorrectly attributed to the vessel&#39; s builder, Melbourne Smith, in our artic le on the Amistad. In Sea History 70, in &quot;The Stuff of Dreams,&quot; Walter Jaffee wrote that when President C linton boarded the Jeremiah 0 &#39;Brien he was the first Pres ident in modern times to board an active merchant ship . Pablo A. Wedel of New Orl eans points o ut, however, that in April 1978, Pres ident Jimmy Carter board e d th e D e lta Steamship Co. Freighter Delta Paraguay in igeri a, West Africa. The two excellent photographs of crew in the rigging of the frigate Rose (SH 70, pp 20 and 2 1) were taken by 1 marine photographer Starke Jett.