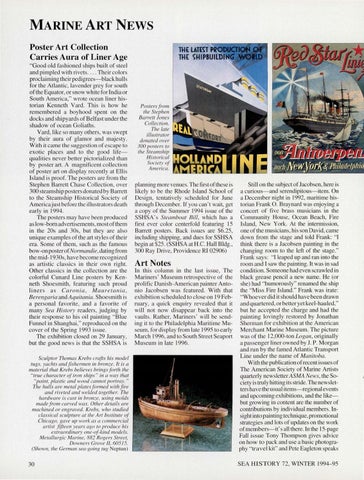 MARINE ART NEWS Poster Art Collection Carries Aura of Liner Age &quot;Good old fashioned ships built of steel and pimpled with rivets .... The ir colors proclaiming their pedigrees-black hulls for the Atlantic, lavender grey for south of the Equator, or snow white for India or South America,&quot; wrote ocean liner hi storian Kenneth Yard. This is how he remembered a boyhood spent on the docks and shipyards of Belfast under the shadow of ocean Goliaths. Yard, like so many others, was swept by their aura of glamor and majesty. With it came the suggesti on of escape to exotic places and to the good lifequaliti es never better pictori ali zed than by poster art. A magnifi cent co llection of poster art on display recently at Elli s Island is proof. The posters are from the Stephen Barrett Chase Collection, over 300 steamship posters donated by Barrett to the Steamship Hi storica l Society of America just before the iI lustrators death earl y in 1994. The posters may have been produced as low-born advertisements, most of them in the 20s and 30s, but they are also unique examples of the art styles of their era. Some of them, such as the famous bow-on poster of Normandie, dating from the mid- l 930s, have become recognized as arti sti c cl assics in their own ri ght. Other class ics in the co llection are the co lorful Cunard Line posters by Kenneth Shoesrnith, featuring such proud lin ers as Caronia , Mauretania , Berengaria andAquitania. Shoesmith is a personal favorite, and a favorite of many Sea History readers, judging by their response to hi s oi l painting &quot;B lue Funnel in Shanghai,&quot; reproduced on the cover of the Spring l 993 issue. The exhibition closed on 29 January, but the good news is that the SSHSA is

Posters from the Stephen Barrett Jones Collection. The Late illustrator donated over 300 posters to the Steamship Historical Society of f9&#39;1flllllA-T&quot;+~irw..â&amp;#x20AC;˘ America.

Sculptor Thomas Krebs crafts his model tugs, yachts andfishennen in bronze. It is a material that Krebs believes brings fort h the &quot;true character of iron ships&quot; in a way that &quot;paint, plastic and wood cannot portray.&quot; The hulls are metal plates formed with fi re and ri veted and welded together. The hardware is cast in bronze, using molds madefi&#39;om carved wax. Other details are machined or engraved. Krebs, who studied classical sculpture at the Art Institute of Chicago, gave up work as a commercial artist fifteen years ago to produce his extraordinary one-of-kind models. Metallurgic Marine, 882 Rogers Street, Downers Grove IL 60515. (Shown, the German sea-going tug Neptun)

Still o n the subject of Jacobsen, here is a curious-and serendipitous-item. On a December night in 1992, maritime histo1ian Frank 0. Braynard was enjoying a concert of five brass musicians in the Community House, Ocean Beach, Fire Island, New York. At the intermission , one of the musicians, his son David, came down from the stage and told Frank: &quot;I think there is a Jacobsen painting in the changing room to the left of the stage.&quot; Frarik says: &quot;I leaped up and ran into the room and I saw the painting. It was in sad conditio n. Someone had even scrawled in black grease pencil a new name. He (or she) had &quot; humorously&quot; renamed the ship the &quot;Miss Fire Island.&quot; Frank was irate: &quot;Whoever did it should have been drawn and quarte red, or better yet keel-hauled,&quot; but he accepted the charge and had the painting lovingly restored by Jonathan Sherman for exhibition at the American Merchant Marine Museum. The pi cture was of the 12,000-ton Logan, originally a passenger liner owned by J.P. Morgan and run by the fa med Atlantic Transport Line unde r the name of Manitoba. With the publication of recent issues of The A merican Society of Marine Artists quarterly news letter ASMA News , the Society is truly hitting its stride. The newsletters have the usual items-regional events and upcoming exhibitions, and the likebut growing in content are the number of contiibutions by individual members. Insight into painting technique, promotional strategies and lots of updates on the work of members-it&#39; s all there. In the 15-page Fall issue Tony Thompson gives advice on how to pack and use a basic photography &quot;travel kit&quot; and Pete Eagleton speaks

planning more venues. The first of these is li kely to be the Rhode Island School of Design, tentatively scheduled for June through December. If you can &#39; t wait, get a copy of the Summer 1994 issue of the SSHSA &#39; s Steamboat Bill, which has a first ever co lor centerfold featuring 15 Barrett posters. Back issues are $6.25, including shipping, and dues for SSHSA begin at $25. (SSHSA at H.C. Hall Bldg., 300 Ray Dri ve, Providence RI 02906)

Art Notes In this column in the last issue, The Mariners &#39; M useum retrospective of the prolific Danish-American painter Antonio Jacobsen was feat ured. With that exhibition scheduled to close on 19 February, a quick enquiry revealed that it will not now disappear back into the vaults. Rather, Mariners&#39; will be sending it to the Phil adelphi a Maritime Museum , for di splay from late 1995 to early March 1996, and to South Street Seaport Museum in late 1996.