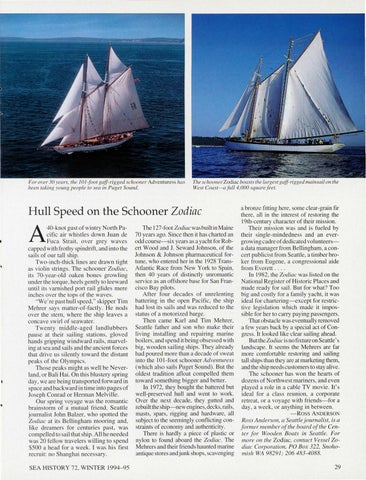 For over 30 yea rs, the 101-foot gaff-rigged schooner Adventuress has been taking young people to sea in Pugel Sound.

The schooner Zodiac boasts the largest gaff-rigged mainsail on the West Coast- a full 4,000 square feet.

Hull Speed on the Schooner Zodiac

40-knotgust ofwintry North Pac ific air whistles down Juan de F uca Stra it, over grey waves capped with frothy spindrift, and into the sail s of our ta ll ship . Two- inch-thick lines are drawn tight as violin strings. The schooner Zodiac, its 70-year-old oaken bones growling under the torque, heels gently to leeward until its varnished port rai l g lides mere inches over the tops of the waves . &quot;We&#39; re past hull speed,&quot; skipper Tim Mehrer says matter-of-factly. He nods over the stern , where the ship leaves a concave sw irl of seawater. Twenty middle-aged landlubbers pause at their sai ling stations , gloved hands gripping windward rai ls, marveling at sea and sai ls and the ancient forces that drive us silently toward the distant peaks of the Olympics. Those peaks might as well be Neverland, or Bali Hai. On this blustery spring day, we are being transported forward in space and backward in time into pages of Joseph Conrad or Herman Melville . Our spri ng voyage was the romantic brainstorm of a mutual fr iend, Seattle journalist Jo hn Balzer, who spotted the Zodiac at its Bellingham mooring and , like dreamers for centuries past, was compelled to sail that ship . All he needed was 20 fe ll ow travelers willing to spend $500 a head for a week. I was his first recruit: no Shanghai necessary. SEA HISTORY 72, WINTER 1994-95

The 127-foot Zodiac was built in Maine 70 years ago. Since then it has charted an odd course-s ix years as a yacht for Robert Wood and J. Seward Johnson, of the Johnson &amp; Johnson pharmaceutical fortune, who entered her in the 1928 TransAtlantic Race fro m New York to Spain, then 40 years of distinctly unromantic service as an offshore base for San Francisco Bay pilots. After fo ur decades of unre lenting battering in the open Pacific, the ship had lost its sail s and was reduced to the statu s of a motorized barge. Then came Karl and Tim Mehrer, Seattle fat her and son who make their living installing and repairi ng marine boilers, and spend it being obsessed with bi g, wooden sailing ships. They already had poured more than a decade of sweat into the 101-foot schooner Adventuress (which also sails Puget Sound). But the oldest traditi on afloat compelled them toward something bigger and better. In 1972, they bought the battered but well-preserved hull and went to work. Over the next decade, they gutted and rebuilt the shi p-new engines, decks, rails, masts, spai·s, rigging and hai·dwai·e, all subject to the seemingly confli cting constraints of economy and authenticity. There is hai·dly a piece of plastic or nylon to fo und aboard the Zodiac. The Mehrers and their friends haunted marine antique stores and junk shops, scavenging

a bronze fitting here, some cleai·-grain fir there, all in the interest of restoring the I 9th-century character of their mi ssion. Their mi ss ion was and is fu eled by their single- mindedness and an evergrowi ng cadre of dedicated volunteersa da ta manager from Bellingham, a concert publi cist fro m Seattle, a timber broker from E ugene, a congressional aide from Everett .... In 1982, the Zodiac was listed on the National Register of Hi storic Places and made ready fo r sail. But for what? Too big and costl y fo r a fami ly yacht, it was ideal for chartering-except for restrictive legislati on which made it impossibl e for her to carry paying passengers. That obstacle was eventually removed a few years back by a special act of Congress . It looked like clear sailing ahead. But the Zodiac is no fixture on Seattle&#39;s landscape. It seems the Mehrers are far more comfortable restoring and sailing tall ships than they are at mai·keting them, and the ship needs customers to stay alive. The schooner ha wo n the hearts of dozens of Northwest mariners, and even played a role in a cable TV mov ie. It&#39;s ideal fo r a class reunion , a corporate retreat, or a voyage with friends-for a day, a week, or anything in between. - Ross ANDERSON